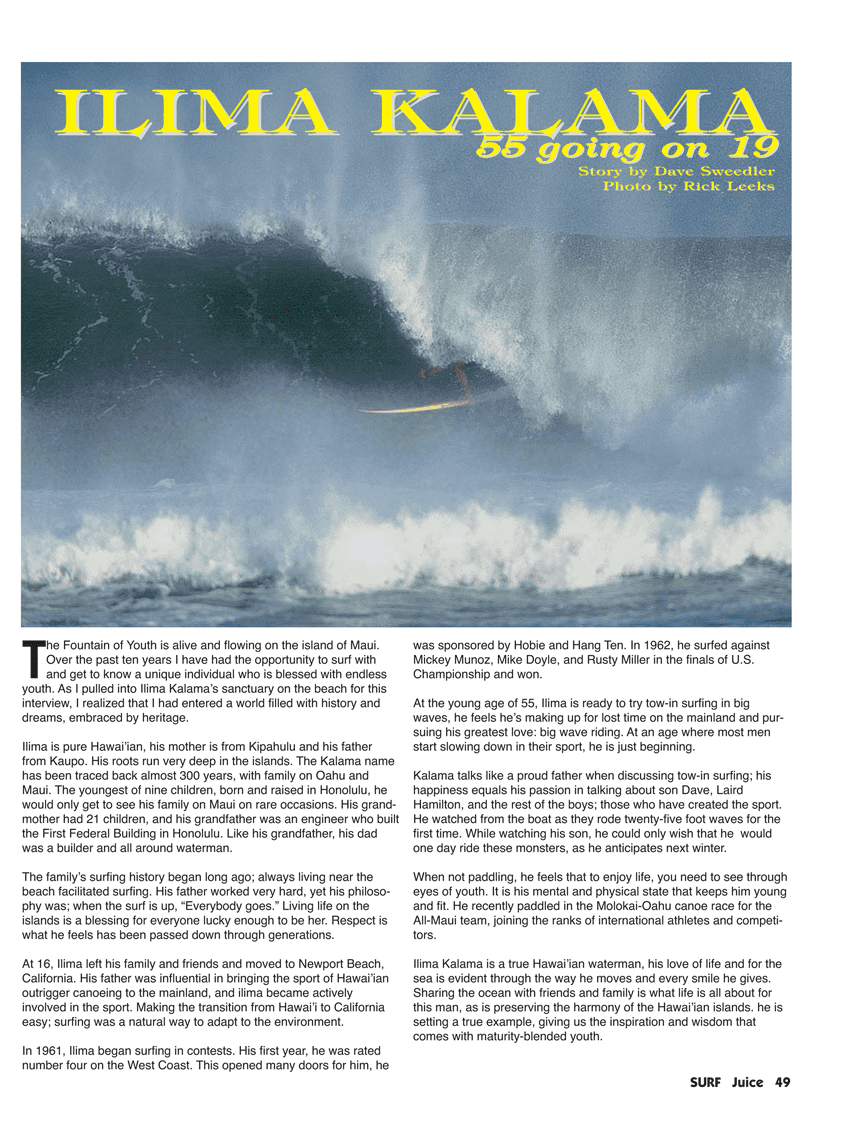 The Fountain of Youth is alive and flowing on the island of Maui. Over the past ten years I have had the opportunity to surf with and get to know a unique individual who is blessed with endless youth. As I pulled into Ilima Kalama’s sanctuary on the beach for this interview, I realized that I had entered a world filled with history and dreams, embraced by heritage.

Ilima is pure Hawai’ian, his mother is from Kipahulu and his father from Kaupo. His roots run very deep in the islands. The Kalama name has been traced back almost 300 years, with family on Oahu and Maui. The youngest of nine children, born and raised in Honolulu, he would only get to see his family on Maui on rare occasions. His grandmother had 21 children, and his grandfather was an engineer who built the First Federal Building in Honolulu. Like his grandfather, his dad was a builder and all around waterman.

The family’s surfing history began long ago; always living near the beach facilitated surfing. His father worked very hard, yet his philosophy was; when the surf is up, “Everybody goes.” Living life on the islands is a blessing for everyone lucky enough to be her. Respect is what he feels has been passed down through generations.

At 16, Ilima left his family and friends and moved to Newport Beach, California. His father was influential in bringing the sport of Hawai’ian outrigger canoeing to the mainland, and ilima became actively involved in the sport. Making the transition from Hawai’i to California easy; surfing was a natural way to adapt to the environment.

In 1961, Ilima began surfing in contests. His first year, he was rated number four on the West Coast. This opened many doors for him, he was sponsored by Hobie and Hang Ten. In 1962, he surfed against Mickey Munoz, Mike Doyle, and Rusty Miller in the finals of U.S. Championship and won.

At the young age of 55, Ilima is ready to try tow-in surfing in big waves, he feels he’s making up for lost time on the mainland and pursuing his greatest love: big wave riding. At an age where most men start slowing down in their sport, he is just beginning.

Kalama talks like a proud father when discussing tow-in surfing; his happiness equals his passion in talking about son Dave, Laird Hamilton, and the rest of the boys; those who have created the sport. He watched from the boat as they rode twenty-five foot waves for the first time. While watching his son, he could only wish that he  would one day ride these monsters, as he anticipates next winter.

When not paddling, he feels that to enjoy life, you need to see through eyes of youth. It is his mental and physical state that keeps him young and fit. He recently paddled in the Molokai-Oahu canoe race for the All-Maui team, joining the ranks of international athletes and competitors.

Ilima Kalama is a true Hawai’ian waterman, his love of life and for the sea is evident through the way he moves and every smile he gives. Sharing the ocean with friends and family is what life is all about for this man, as is preserving the harmony of the Hawai’ian islands. he is setting a true example, giving us the inspiration and wisdom that comes with maturity-blended youth.