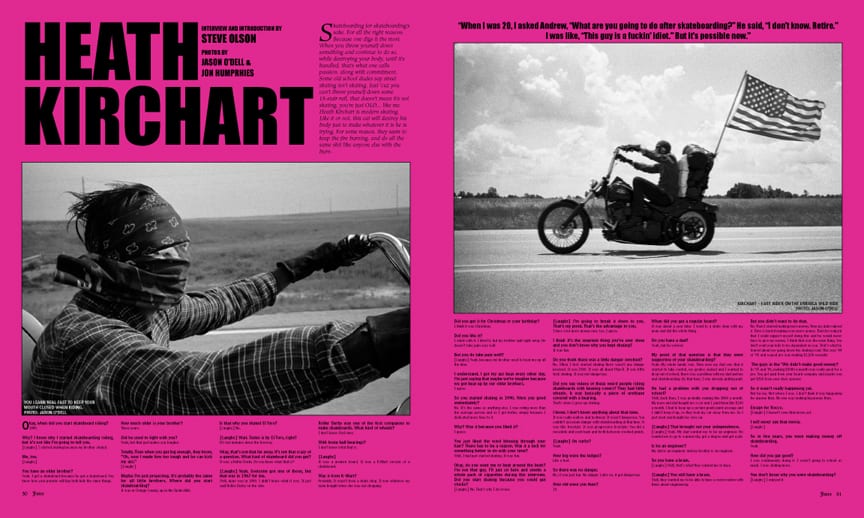 Skateboarding for skateboarding’s sake. For all the right reasons. Because one digs it the most. When you throw yourself down something and continue to do so, while destroying your body, until it’s handled, that’s what one calls passion, along with commitment. Some old school dudes say street skating isn’t skating. Just ‘cuz you can’t throw yourself down some 15-stair rail, that doesn’t mean it’s not skating, you’re just OLD… like me. Heath Kirchart is modern skating. Like it or not, this cat will destroy his body just to make whatever it is he is trying. For some reason, they seem to keep the fire burning, and do all the same shit like anyone else with the burn.

Okay, when did you start skateboard riding?
1990.

Why? I know why I started skateboarding riding, but it’s not like I’m going to tell you.
[Laughs] I started skating because my brother skated.

How much older is your brother?
Three years.

Did he used to fight with you?
Yeah, but that just makes you tougher.

Totally. Then when you get big enough, they know, “Oh, now I made him too tough and he can kick my ass.”
[Laughs]

Maybe I’m just projecting. It’s probably the same for all little brothers. Where did you start skateboarding?
It was in Orange County, up in the Tustin Hills.

Is that why you skated El Toro?
[Laughs] No.

Okay, that’s not that far away. It’s not that crazy of a question. What kind of skateboard did you get?
It was a Roller Derby. Do you know what that is?

Roller Derby was one of the first companies to make skateboards. What kind of wheels?
I don’t know. Red ones.

With loose ball bearings?
I don’t know what that is.

[Laughs]
It was a modern board. It was a K-Mart version of a skateboard.

Was it from K-Mart?
Probably. It wasn’t from a skate shop. It was whatever my mom bought when she was out shopping.

Did you get it for Christmas or your birthday?
I think it was Christmas.

Did you like it?
I stuck with it. I liked it, but my brother quit right away. He doesn’t take pain very well.

But you do take pain well?
[Laughs] Yeah, because my brother used to beat me up all the time.

I understand. I got my ass beat every other day. I’m just saying that maybe we’re tougher because we got beat up by our older brothers.
I agree.

So you started skating in 1990. Were you good immediately?
No. It’s the same as anything else. I was riding more than the average person and so I got better, simply because I dedicated more time to it.

Why? Was it because you liked it?
I guess.

You just liked the wind blowing through your hair? There has to be a reason. Was it a lack for something better to do with your time?
Well, I had just started skating. It was fun.

Okay, do you want me to beat around the bush? I’m not that guy. I’ll just sit here and smoke a whole pack of cigarettes during this interview. Did you start skating because you could get chicks?
[Laughs] No. That’s why I do it now.

[Laughs] I’m going to break it down to you. That’s my point. That’s the advantage to you.
I have a lot more money now, too, I guess.

I think it’s the smartest thing you’ve ever done and you don’t know why you kept skating?
It was fun.

Do you think there was a little danger involved?
No. When I first started skating there wasn’t any danger involved. It was 1990. It was all about Plan B. It was little trick skating. It was not dangerous.

Did you see videos of these weird people riding skateboards with bearing covers? They had little wheels. It was basically a piece of urethane covered with a bearing.
That’s when I grew up skating.

I know. I don’t know anything about that time.
It was really mellow and technical. It wasn’t dangerous. You couldn’t associate danger with skateboarding at that time. It was like freestyle. It was progressive freestyle. You did a noseslide and went back and forth between crooked grinds.

So there was no danger.
No, it was just fun. No danger. Later on, it got dangerous.

When did you get a regular board?
It was about a year later. I went to a skate shop with my mom and did the whole thing.

Do you have a dad?
Yeah, but he worked.

My point of that question is that they were supportive of your skateboarding?
Yeah. My whole family was. Then once my dad saw that it started to take control, my grades sucked and I wanted to drop out of school, there was a problem with my dad and me and skateboarding. By that time, I was already getting paid.

He had a problem with you dropping out of school?
Well, back then, I was probably making like $600 a month. My mom and dad bought me a car and I paid them like $100 a month. I had to keep up a certain grade point average and I didn’t keep it up, so they took my car away from me. So I just went and bought my own car.

[Laughs] That brought out your independence.
[Laughs] Yeah. My dad wanted me to be an engineer. He wanted me to go to a university, get a degree and get a job.

So you have a brain.
[Laughs] Well, that’s what they wanted me to have.

[Laughs] You still have a brain.
Well, they wanted me to be able to have a conversation with them about engineering.

But you didn’t want to do that.
No. Then I started making more money. Then my dad realized it. Then I started making even more money. Then he realized that I could support myself doing this and he would never have to give me money. I think that was the main thing. You don’t want your kids to be dependent on you. That’s what he feared about me going down the skating road. This was ’94 or ’95 and a good pro was making $1,500 a month.

So it wasn’t really happening yet.
Not for me. Not where I was. I don’t think it was happening for anyone then. No one was making big money then.

Except for Rocco.
[Laughs] I haven’t seen that movie yet.

I will never see that movie.
[Laughs]

So in five years, you were making money off skateboarding.
Yeah.

How did you get good?
I was continuously doing it. I wasn’t going to school as much. I was skating more.

You don’t know why you were skateboarding?
[Laughs] I enjoyed it.

You did it because you dug it. Can you dig it?
[Laughs] Back then you didn’t skate because you wanted to be sponsored or pro. People weren’t even making money. You could get some free boards and stuff.

How did they keep skateboarding if they weren’t making money?
Well, if you were making $1,500 a month, you were paying like $300 for rent. Every skater had a Honda Civic, a cheap one. It’s not like now, where every skater has a Cadillac or a Lexus.

So you had a Honda?
My first car was a Honda Civic.

They get you wherever you need to go.
I’d buy one right now. I don’t have a car. I just looked at Honda Civics online, though now I might buy the Accord.

[Laughs] So the Honda Civic was the go-to car?
Every skater had a Honda Civic.

Why? Was it because they were so reliable?
Tony Hawk had a little hatchback Honda Civic. I remember he came to pick me up and he was whipping around to his house in Falbrook. I just thought it was the most amazing car. It was like a little go-kart. That’s probably why I got one, because Tony Hawk had one.

[Laughs] Was Tony Hawk the go-to guy?
He was my first sponsor. This was back when Tony wasn’t making that much money. I think he had a Lexus, but he had to trade it back in for the Civic. That’s when he was taking a step back on his way to taking many more steps forward.

[Laughs] Yeah, many more steps toward the bank. Wait. How did you get to that time?
All I did was skateboard. I was skating outside the school and the curbs by my house. I was skating flat ground and manual pads. That’s it.

I’m trying to understand the transition from skating curbs and manual pads to throwing yourself down 30 stairs.
It happened because the Plan B video came out. Pat Duffy was in it and he started skating handrails. From that moment on, I skated handrails. Those were the video days and Duffy was leading the charge handrail-wise.

I’m clueless. I know Pat, but I don’t know how it all went down.
When Pat Duffy came out with that video part, everyone thought, “If I want to be a pro skater, now I can’t.” That was way too gnarly. It was way beyond belief. It was insane. It was like, “Wow. I thought that I was getting pretty good, now I know I’m not.” Pat was taking it real seriously.

That’s pretty cool. I didn’t know this stuff.
Pat Duffy has to be one of my top influences. He was the guy that blew everyone away.

So everyone is doing advanced freestyle on manual pads and small ledges and here comes Duffy blasting huge sets of stairs and handrails.
Massive.

I didn’t know this part of the history of skateboarding. I didn’t know that Duffy rode for Plan B. I knew that Sheffey did. He was gnarly.
Yeah, but I had never seen anything like what Pat Duffy was doing. I’d seen what Sean Sheffey was doing. I saw what Mike Carroll was doing. Even though they did it better than anyone else, I’d seen that type of skating. I’d never seen anyone skate like Pat Duffy. This was when he didn’t even had a board sponsor. No one knew who he was when he was doing this.

How did he get in the video?
That was his “sponsor me” video footage. It’s funny, because his part had a big impact on me. That’s why I steered in that direction.