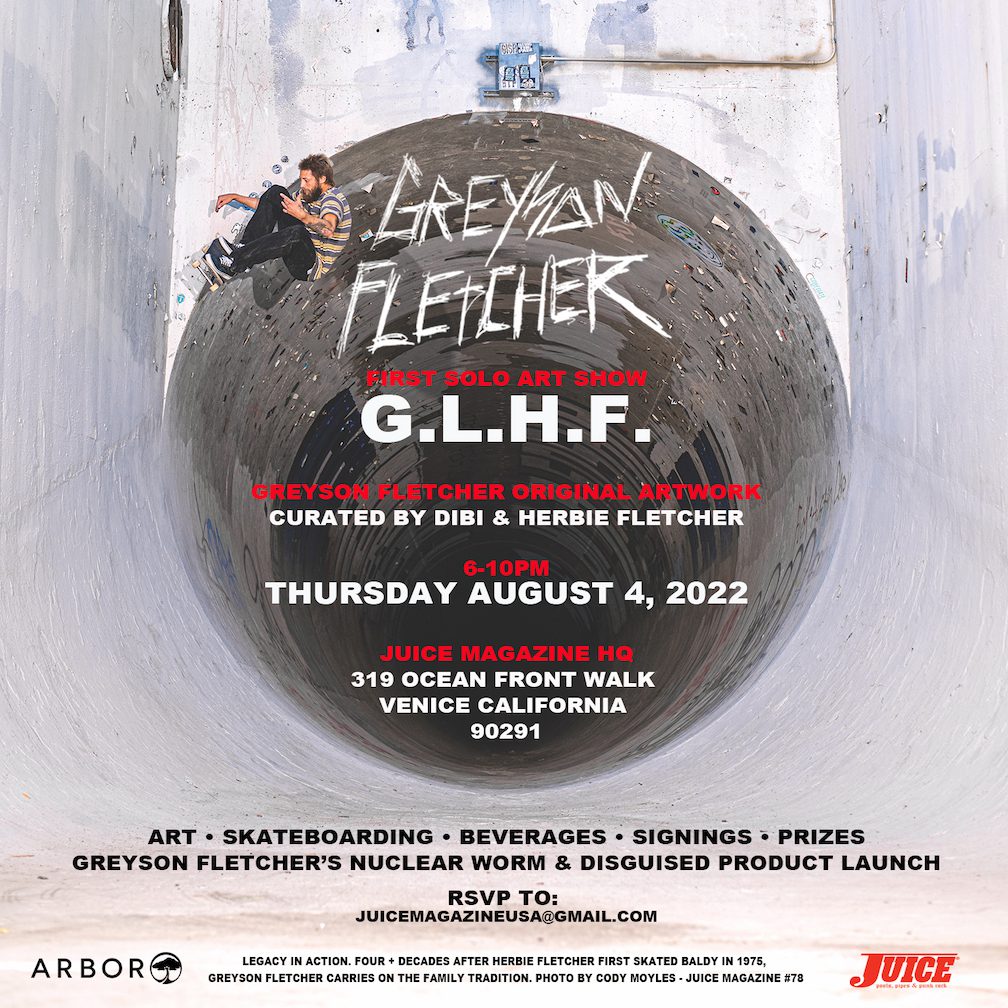 Greyson Fletcher is a name synonymous with style, legacy and rebellion. He lives and breathes a lifestyle filled with art, skate, surf and gaming and excels at all of them. His counterculture-honed artwork has been featured at the Gagosian and now adorns his newest signature line of Arbor Skateboards.

His skateboarding and surfing continues to defy boundaries, push limits and expand the imagination as well as reality. His birthright in “Surfing’s First Family’ is absolute and his search for good waves is a daily endeavor. Greyson leaves blood every time he paints a urethane melting line in a full pipe, pool or park, challenging the possibilities of the terrain with his one of a kind brutally smooth style.

This is Greyson’s first solo art show following a successful show with the Fletcher family at the Gagosian in New York City in 2019, celebrating the Rizzoli book “Fletcher: A Lifetime In Surf”, written by Dibi Fletcher. Gagosian said, “The legendary Fletcher family has been an institution and guiding presence in surf and skate culture for decades, with an influence that extends to the worlds of fashion, music, streetwear and art.”

Greyson’s art show is curated by Dibi and Herbie Fletcher, and will include Greyson’s legendary “Death Box” sculpture and a number of large scale oil and canvas pieces and sculptures, delivering vital messaging regarding humanity and its contributions to the environmental wasteland, and speaking to the expectations of good and evil. The show will also include an exhibition of photos, skateboard graphics, stickers and Fletcher family memorabilia.

When Dan Levy asked Greyson about his “Death Box” sculpture, he replied, “I wanted to make something like a sculpture that people could look at through my eyes to see how I see skateboarding. I wanted to recreate a backyard pool, so I had this idea to have a wooden box that you hang on the wall. I cut a deathbox into it, then I put pool coping on top of it with tile on it. To me, when you skate a backyard pool, you wanna hit the deathbox. That’s always your number one goal. I thought the deathbox was very important, so I was like, “Backyard pool, death box, art piece, sick!” I even put a light in it that works.”

“G.L.H.F.” is a special show that will celebrate Greyson’s “Nuclear Worm” and “Disguised” artwork on his Arbor pro model skateboards that you can find at ArborCollective.com, in addition to his first Arbor signature series featuring Greyson’s “Darksider” and “Delusion.” original art.

In speaking about the new decks and working with Arbor, Greyson told Juice, “I helped design a shape and did the artwork, so I’m psyched. I know my board, nose to tail. Arbor is super environmentally friendly and they farm trees as part of the Give Back Program, which is really cool too. They’re not just chopping down trees and killing forests.”

ABOUT: The Nuclear Worm series… “In the year 2030, when the world was disintegrating from the fumes of pollution, there was a brief moment when a portal was created between this reality and the unknown. That gateway was referred to by the few who were chosen for the journey, as the WORMHOLE…”

“The Good Kid Disguised as a Bad Kid to get into the party.” – Greyson Fletcher

NEW GREYSON FLETCHER PRO MODELS: Greyson’s use of bold lines personify his perspective of art, culture, society, and staying true to his own perspectives of non-conformity. His reputation on a skateboard has traveled worldwide and today Arbor highlights his art in these new Disguised and Nuclear Worm graphic offerings.

CROSSING THE GRAIN – THE 25 YEAR JOURNEY OF ARBOR

PrevPreviousDan Levy Behind the Image with Val LaForge