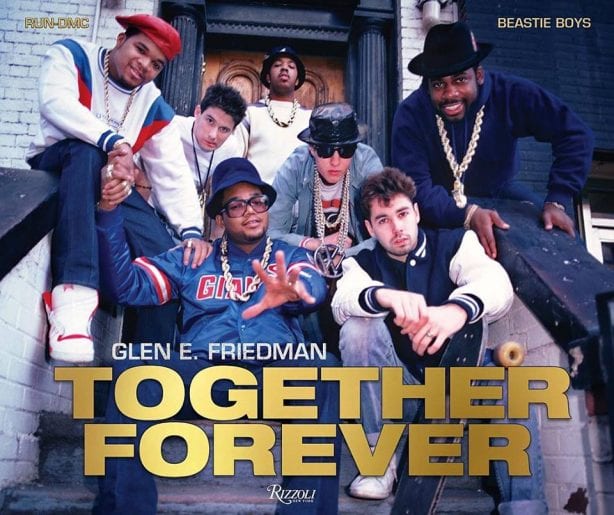 Glen E. Friedman, celebrated photographer of skate, punk, and hip-hop culture, made a special appearance on November 2, 2019, at Book Soup in West Hollywood, California to sign copies of his newest books “Together Forever” and the newly expanded version of “Dogtown: The Legend of the Z-Boys” by GEF and C.R. Stecyk III.

Glen flew from New York City to Los Angeles just a few hours before the signing commenced and arrived at the revered Book Soup in time to graciously entertain questions from those in attendance, including special guests, Z-Boys Jim Muir and Peggy Oki, as well as Zephyr godfather, Jeff Ho and Skateboarding Hall of Famer, Cris Dawson, who were on hand to sign copies of the new “Dogtown – The Legend of the Z-Boys” book.

“TOGETHER FOREVER” – Glen E. Friedman has done it again with yet another classic collection of many of his never-before-seen photos of RUN-DMC and The Beastie Boys in a brilliantly assembled tome written by GEF with incredible contributions by Chuck D, DJ Run and Mike D, and a one-of-a-kind introduction by Chris Rock. This unique collectible, published by Rizzoli, is available now and you should order your copy soon, as Friedman’s books quickly sell out the first editions.

This tome captures a special moment in time in never-before-seen pictures of the pivotal relationship between the Beastie Boys and Run-DMC during the OG “Together Forever” concert tour and as burgeoning rap–and eventual pop-radio–stars.

“Together Forever” is an OG reference to the Beastie Boys and Run-DMC’s seminal, popular, and highly publicized 1987 joint concert tour. But “Together Forever” is more than a Run-DMC song or concert tour name; it’s symbolic of the strong bond of friendship between these two groups and how they significantly influenced each other, all while having a massive impact on both pop and hip-hop music.

This visual time capsule includes scores of never-before-published shots taken by Glen E. Friedman of the bands in concert, goofing around with various performers of the time, and, of course, hanging out together. Including an introduction by Chris Rock and text contributions by the living band members of both groups, Together Forever is a must-have chronicle assembled by the ultimate photographer for Beastie Boys and Run-DMC fans.

Order your copy of “Together Forever” now.

DOGTOWN: THE LEGEND OF THE Z-BOYS BY C.R. STECYK III AND GLEN E. FRIEDMAN – Friedman has put serious work into making this new expanded edition of the Dogtown book bigger and better with incredible redesign and a surprise or two.

In the early 1970s, in the DogTown area of west Los Angeles, a group of young surfers known as the Zephyr Team (Z-Boys) was experimenting with new and radical moves and styles in the water, which they translated to the street. When competition skateboarding returned in 1975, the Z-Boys turned the skating world on its head. DogTown: The Legend of the Z-Boys is a truly fascinating case study of how an underground sport ascended in the world. These are the stories and images of a time that not only inspired a generation but changed the face of the sport forever.

This volume has been described as “the DogTown textbook” and an indispensable companion piece to the Sony Pictures Classics film Dogtown and Z-Boys. Now spanning 1975–1985 and beyond, the first section of the book includes the best of the DogTown articles written and photographed by C.R. Stecyk III as they originally appeared in SkateBoarder Magazine. The second half compiles hundreds of skate images from the archives of Glen E. Friedman—many of which appear in the movie. (Stecyk and Friedman acted as executive producers and advisors for the film.)

Order your copy of “Dogtown: The Legend of the Z-Boys” now.