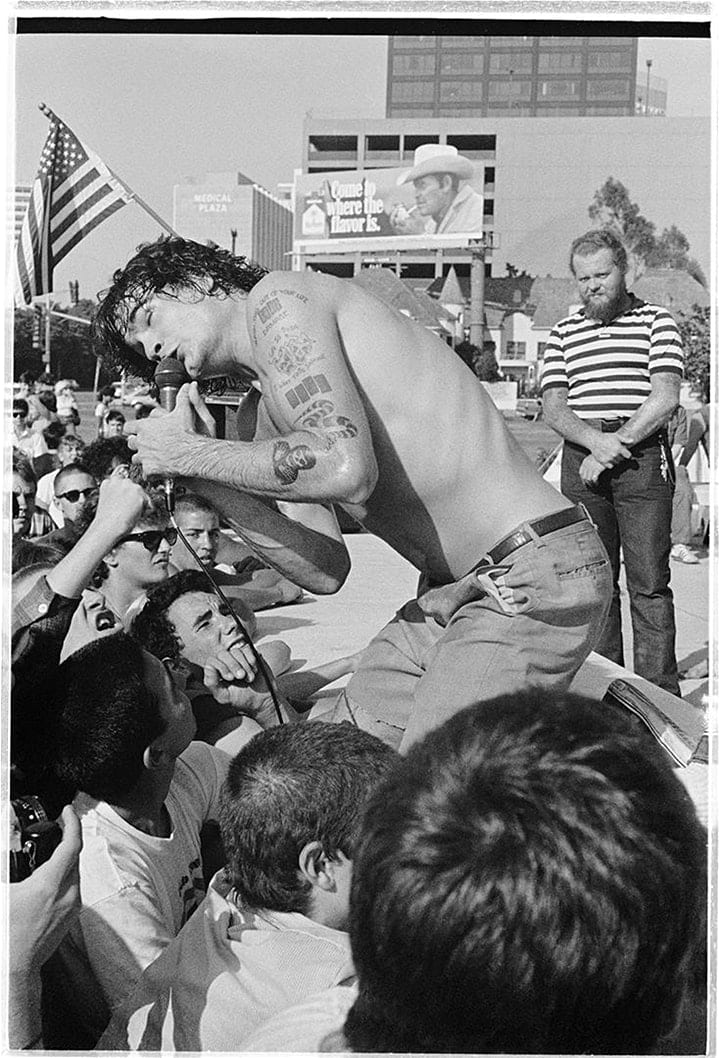 Discovering hidden treasures and sharing never before seen images, in this day and age, is an endeavor to be savored and appreciated. In the ’80s, Kevin Salk’s passion for punk rock led him to Black Flag, Circle Jerks, Minor Threat, Misfits, Mike Watt and the Descendents shows, while his interest in photography provided him with an opportunity to document memorable moments from the punk and hardcore music scene.

After taking a photography class in high school and setting up a dark room at his home in Manhattan Beach, Salk spent hours shooting and developing his photos for the sheer enjoyment of the process.

As life rolled on past his teenage years, Salk went off to college and then on to a career in financial advising, while his boxes of negatives and prints made a move into the attic, just waiting to be re-discovered decades later.

Salk’s excitement in now sharing his work is only matched by the intensity of his photos. As he explained, “I am really excited about the show. It is my first show ever. I was just a teenager when I took them. I never expected this to blow up like this. It is very humbling and super fun.”

Your chance to see this trove of punk rock gems is happening this weekend, January 11, 2020, in Los Angeles at the Fathom Gallery from 7-10pm at the Artist Reception. The outpouring of appreciation for Salk’s work is well deserved and we encourage you to go have a look and say thanks to Kevin for sharing these iconic images.

Fathom Gallery presents: “Punk Rock Photos From a Fan’s Perspective” by Kevin Salk. The Artist Reception is set for January 11, 2020 from 7-10pm at 12227 Wilshire Blvd., Los Angeles, California, and this compelling exhibit will be on display through the end of January.

This exhibit is “a journey back into the early 1980’s punk scene through the eyes of Kevin Salk, a teenager passionate about punk music. Growing up in LA’s South Bay, he was also at the right place at the right time. As a high school student, taking a photography class, he captured the raw power and emotions of the early hardcore punk bands playing in and around his home town of Manhattan Beach.

The photography captures some of the genre’s most important recording artists, from a true fan’s perspective.

RSVP for complimentary tickets to the exhibit here:

For more from the Fathom Gallery LA, please visit: https://www.fathom.gallery.