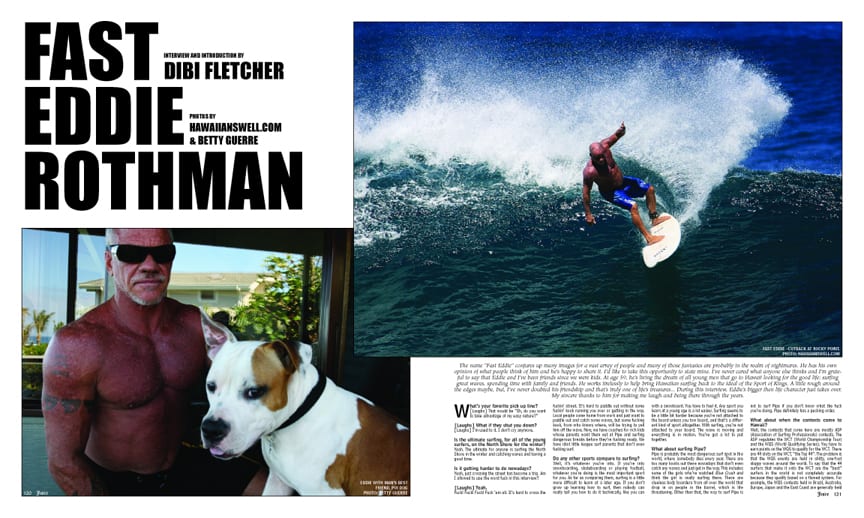 The name “Fast Eddie” conjures up many images for a vast array of people and many of those fantasies are probably in the realm of nightmares. He has his own opinion of what people think of him and he’s happy to share it. I’d like to take this opportunity to state mine. I’ve never cared what anyone else thinks and I’m grateful to say that Eddie and I’ve been friends since we were kids. At age 59, he’s living the dream of all young men that go to Hawaii looking for the good life: surfing great waves, spending time with family and friends. He works tirelessly to help bring Hawaiian surfing back to the ideal of the Sport of Kings. A little rough around the edges maybe, but, I’ve never doubted his friendship and that’s truly one of life’s treasures… During this interview, Eddie’s bigger then life character just takes over. My sincere thanks to him for making me laugh and being there through the years.

“TO SAY THAT THE 44 SURFERS THAT MAKE IT ONTO THE WCT ARE THE BEST SURFERS IN THE WORLD IS NOT COMPLETELY ACCURATE BECAUSE THEY QUALIFY BASED ON A FLAWED SYSTEM.”

What’s your favorite pick up line?
[Laughs] That would be “Eh, do you want to take advantage of my easy nature?”

[Laughs] What if they shut you down?
[Laughs] I’m used to it. I don’t cry anymore.

Is it getting harder to do nowadays?
Yeah, just crossing the street has become a trip. Am I allowed to use the word fuck in this interview?

[Laughs] Yeah.
Fuck! Fuck! Fuck! Fuck ’em all. It’s hard to cross the fuckin’ street. It’s hard to paddle out without some fuckin’ kook running you over or getting in the way. Local people come home from work and just want to paddle out and catch some waves, but some fucking kook, from who knows where, will be trying to yell him off the wave. Now, we have coaches for rich kids whose parents want them out at Pipe and surfing dangerous breaks before they’re fucking ready. We have idiot little league surf parents that don’t even fucking surf.

Do any other sports compare to surfing?
Well, it’s whatever you’re into. If you’re into snowboarding, skateboarding or playing football, whatever you’re doing is the most important sport for you. As far as comparing them, surfing is a little more difficult to learn at a later age. If you don’t grow up learning how to surf, then nobody can really tell you how to do it technically, like you can with a snowboard. You have to feel it. Any sport you learn at a young age is a lot easier. Surfing seems to be a little bit harder because you’re not attached to the board unless you tow board, and that’s a different kind of sport altogether. With surfing, you’re not attached to your board. The wave is moving and everything is in motion. You’ve got a lot to put together.

What about surfing Pipe?
Pipe is probably the most dangerous surf spot in the world, where somebody dies every year. There are too many kooks out there nowadays that don’t even catch any waves and just get in the way. This includes some of the girls who’ve watched Blue Crush and think the girl is really surfing there. There are clueless body boarders from all over the world that drop in on people in the barrel, which is life threatening. Other than that, the way to surf Pipe is not to surf Pipe if you don’t know what the fuck you’re doing. Pipe definitely has a pecking order.

What about when the contests come to Hawaii?
Well, the contests that come here are mostly ASP (Association of Surfing Professionals) contests. The ASP regulates the WCT (World Championship Tour) and the WQS (World Qualifying Series). You have to earn points on the WQS to qualify for the WCT. There are 44 slots on the WCT, “the Top 44”. The problem is that the WQS events are held in shitty, one-foot sloppy waves around the world. To say that the 44 surfers that make it onto the WCT are the “best” surfers in the world is not completely accurate because they qualify based on a flawed system. For example, the WQS contests held in Brazil, Australia, Europe, Japan and the East Coast are generally held in one-foot, crappy waves. Some of these contests are 6-star events, which means you earn more points than surfing in a 2-star event. So when you can surf in one-foot Brazil shit waves and earn 2,500 points, and then surf Pipe and earn only 800 points, you can see the flaw in the system. Brazil and Europe have enough 6-star events to qualify for the WCT. In Hawaii, there are only two 6-stars, and they’re at the end of the tour. So, all these guys have earned points during the circuit rush to Hawaii so they can look like heroes and push most of the Hawaiians out of their own contest. A lot of those guys are small wave riders and can’t even cut it here. The big companies could do something about it, but they won’t. For instance, clothing sales in Europe are three times higher than in the United States. This system is the only one that allows the top-rated athletes to make rules that can keep some of the best surfers in the world out of the WCT events. Sometimes somebody will bust through, like Myles Padaca. He won the Triple Crown, but could never get on the WCT, because he’s not a little wave surfer. Jamie O’Brien won the Pipe Masters, the Hansen’s Energy Pro, the X-Games and the Backdoor Shootout, but he still can’t get on the WCT. He went around the world surfing their stupid little circuit. He surfed in twelve contests, and never got out of the first heat because the waves were not even a foot high. How do you figure those “top 44” are the best in the world? It always comes down to the money. The more money in the contest, no matter where it is, means more stars, which means more points. That’s why you don’t see that many Hawaiian surfers on the WCT. You can make the WCT without ever having to surf a wave over four feet.

What would you like to see happen to change this?
We are changing it. When the ASP comes here, they have to take the winner of the Hansen’s Monster, no matter where he’s from. They have to take a Tahitian and 14 local Hawaiian surfers. They hate it and fight it every year, but we make them do it anyway. The rest of the world should do the same. For some reason, the Tahitians think they need the ASP, but it’s really the opposite: the ASP needs Tahiti and the Tahitians let them walk all over them. They can easily change it, but for some reason, they are scared to step up. You should qualify from your own region, just like every other sport. And you should make it the top 16, not top 44, and everyone else qualifies from their own country.