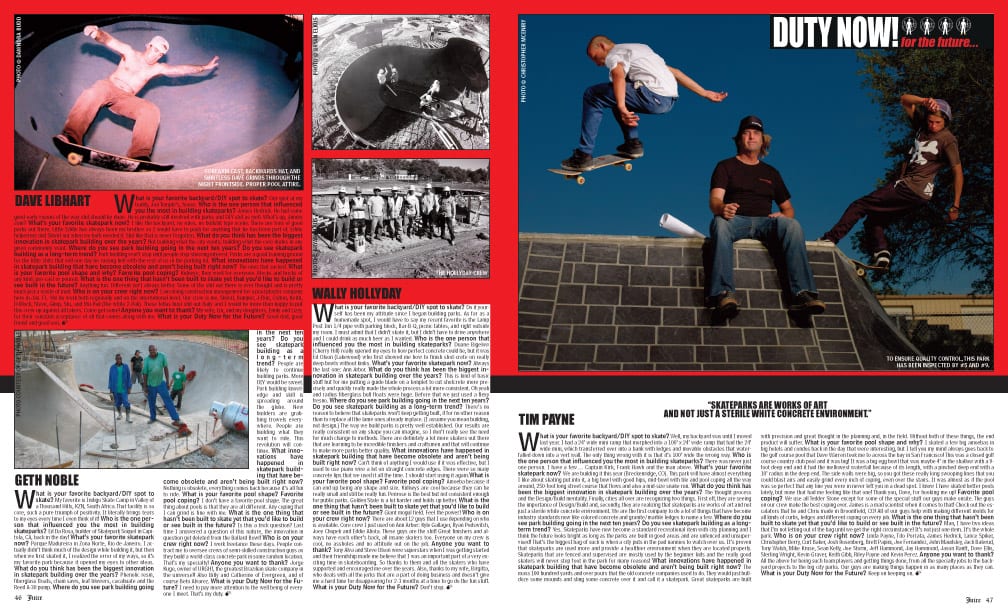 Well, my backyard was until I moved last year. I had a 24’ wide mini ramp that morphed into a 100’ x 24’ wide ramp that had the 24’ wide mini, which transferred over into a bank with ledges and movable obstacles that waterfalled down into a vert wall. The only thing wrong with it is that it’s 100’ wide the wrong way.

There was never just one person. I have a few… Captain Kirk, Frank Hawk and the man above.

We are building it this year (Breckenridge, CO). This park will have almost everything I like about skating put into it, a big bowl with good hips, mid-bowl with tile and pool coping all the way around, 250-foot long street course that flows and also a mid-size snake run.

The thought process and the Design/Build mentality. Finally, cities all over are recognizing two things. First off, they are seeing the importance of Design/Build and, secondly, they are realizing that skateparks are works of art and not just a sterile white concrete environment. We are the first company to do a lot of things that have become industry standards now like colored concrete and granite/marble ledges to name a few.

Yes. Skateparks have now become a standard recreational item with city planning and I think the future looks bright as long as the parks are built in good areas and are unfenced and unsupervised! That’s the biggest bag of suck is when a city puts in the pad nannies to watch over us. It’s proven that skateparks are used more and provide a healthier environment when they are located properly. Skateparks that are fenced and supervised are mostly used by the beginner kids and the really good skaters will never step foot in the park for many reasons!

The mass 100 hundred yards and over pours that the old concrete companies used to do. They would just bulldoze some mounds and sling some concrete over it and call it a skatepark. Great skateparks are built with precision and great thought in the planning and, in the field. Without both of these things, the end product will suffer.

I skated a few big amoebas in big hotels and condos back in the day that were interesting, but I tell you my mind always goes back to the golf course pool that Dave Warren took me to across the bay in San Francisco! This was a closed golf course country club pool and it was big! It was a big egg bowl that was maybe 4 feet in the shallow with a 9-foot deep end and it had the mellowest waterfall because of its length, with a pinched deep end with a 10-foot radius in the deep end. The side walls were big, so you got these really long swooping lines that you could blast airs and easily grind every inch of coping, even over the stairs. It was almost as if the pool was so perfect that any line you were in never left you in a dead spot. I know I have skated better pools lately, but none that had me feeling like that one! Thank you, Dave, for hooking me up!

“Skateparks are works of art and not just a sterile white concrete environment.”

We use all Tedder Stone except for some of the special stuff our guys make onsite. The guys on our crew make the best coping ever. James is a mad scientist when it comes to that! Check out the escalators that he and Chris made in Broomfield, CO! All of our guys help with making different molds for all kinds of curbs, ledges and different coping on every job.

I have two ideas that I’m not letting out of the bag until we get the right circumstance! It’s not just one item. It’s the whole park.

All the above for being such team players and getting things done, from all the specialty jobs to the backyard projects to the big city parks. Our guys are making things happen in as many places as they can.

Keep on keeping on. 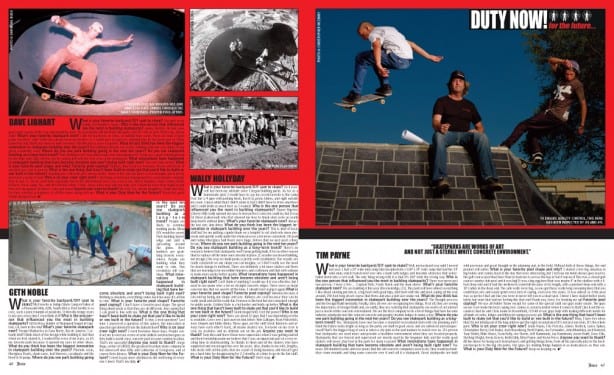