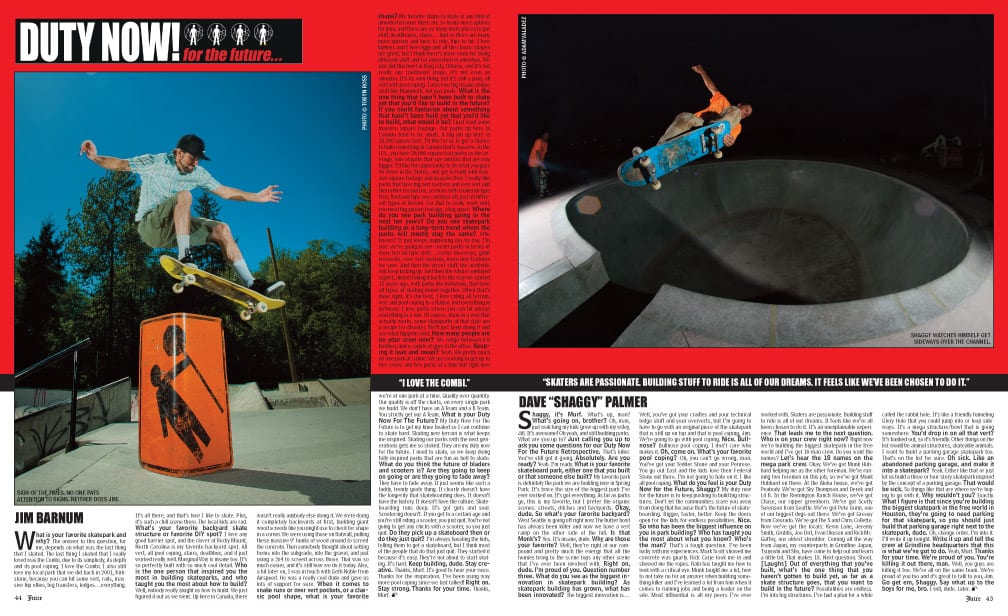 Oh, man, just watching my kids grow up with my wifey, Jill. It’s awesome! Oh yeah, and still building parks. What are you up to?

Just calling you up to ask you some questions for our Duty Now For the Future Retrospective.

Absolutely. Are you ready?

What is your favorite skateboard park, either one that you built or that someone else built?

My favorite park is definitely the park we are building now in Spring Park, Texas. It’s twice the size of the biggest park I’ve ever worked on. It’s got everything. As far as parks go, this is my favorite, but I prefer the organic scenes: streets, ditches and backyards.

West Seattle is going off right now. The butter bowl has always been killer and now we have a vert ramp on the other side of the hill.

Why are those your favorite?

Well, they’re right at our compound and pretty much the energy that all the homies bring to the scene tops any other scene that I’ve ever been involved with.

The biggest innovation is… Well, you’ve got your cradles and your technical ledge stuff and your oververts, but I’m going to have to go with an original piece of the skatepark that is still up on top and that is pool coping, Jim. We’re going to go with pool coping.

Bullnose pool coping. I don’t care who makes it.

Oh, you can’t go wrong, man. You’ve got your Tedder Stone and your Penrose. You go out East and the kids love their Federal Stone out there. I’m not going to hate on it. I like all pool coping.

What do you feel is your Duty Now for the Future, Shaggy?

My duty now for the future is to keep pushing to build big structures. Don’t let the communities scare you away from doing that because that’s the future of skateboarding. Bigger, faster, better. Keep the doors open for the kids for endless possibilities.

Nice. So who has been the biggest influence on you in park building? Who has taught you the most about what you know? Who’s the man?

That’s a tough question. I’ve been lucky with my experiences. Mark Scott showed me concrete was gnarly. Rick Carje took me in and showed me the ropes. Rabi has taught me how to look with a critical eye. Munk taught me a lot, how to not take no for an answer when building something killer and I’ve learned a lot from him when it comes to running jobs and being a leader on the site. Most influential is all my peers I’ve ever worked with. Skaters are passionate. Building stuff to ride is all of our dreams. It feels like we’ve all been chosen to do it. It’s an unexplainable experience.

That leads me to the next question. Who is on your crew right now?

Right now we’re building the biggest skatepark in the free world and I’ve got 18-man crew. Do you want the names?

Let’s hear the 18 names on the mega park crew.

Okay. We’ve got Munk Hubbard helping me as the other foreman. We’re running two foremen on this job, so we’ve got Munk Hubbard on there. At the Aloha house, we’ve got Peabody. We’ve got Sky Thompson and Derek and Lil B. In the Remington Ranch House, we’ve got Chase, our ripper greenhorn. We’ve got Scotty Sorenson from Seattle. We’ve got Pete Gunn, one of our biggest dogs out there. We’ve got Greasy from Colorado. We’ve got The 5 and Chris Collette. Now we’ve got the locals: Kevin Lane, Jeremy Smith, Grubbs, Joe Dirt, Evan Okeson and Rick McGaffey, our oldest shredder. Coming all the way from Japan, my counterparts in Grindline Japan, Tsuyoshi and Sho, have come to help out and learn a little bit. That makes 18. Next question. Shoot.

[Laughs] Out of everything that you’ve built, what’s the one thing that you haven’t gotten to build yet, as far as a skate structure goes, that you want to build in the future?

Possibilities are endless. I’m into big structures. I’ve had a plan for a while called the rabbit hole. It’s like a friendly funneling Glory Hole that you could jump into or loop sideways. It’s a mega structure/bowl that is going somewhere.

You’d drop in on all that vert?

It’s banked out, so it’s friendly. Other things on the list would be animal structures, skateable animals. I want to build a parking garage skatepark too. That’s on the list for sure.

“Skaters are passionate. building stuff to ride is all of our dreams. it feels like we’ve been chosen to do it.”

Oh sick. Like an abandoned parking garage, and make it into a skatepark?

Yeah. Either like that or just let us build a three or four-story skatepark inspired by the concept of a parking garage.

That would be sick.

So things like that are where we’re hoping to go with it.

What I figure is that since you’re building the biggest skatepark in the free world in Houston, they’re going to need parking for that skatepark, so you should just build that parking garage right next to the skatepark, dude.

Oh, change order. I’m into it. I’ll write it up tonight.

Write it up and tell the crew at Grindline headquarters that this is what we’ve got to do.

Thanks for your time. We’re proud of you. You’re killing it out there, man.

Well, you guys are killing it too. We’re all on the same team. We’re proud of you too and it’s great to talk to you, Jim.

Go get em, Shaggy. Say what up to the boys for me, bro.

I will, dude. Later. 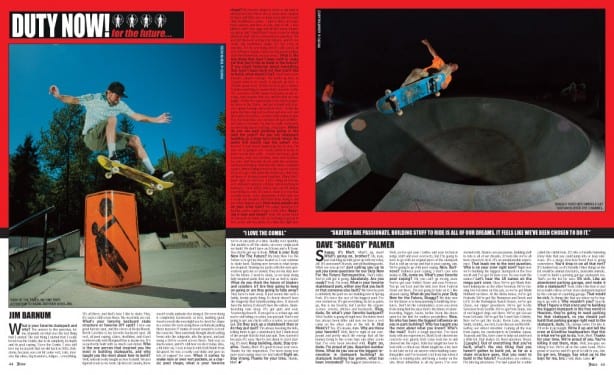