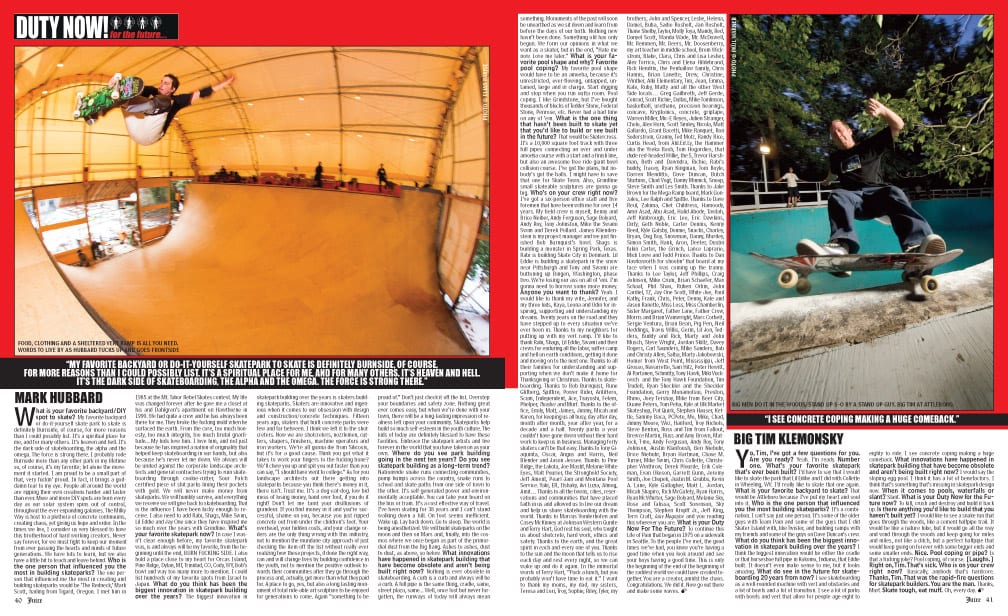 My favorite backyard or do-it-yourself skate park to skate is definitely Burnside, of course, for more reasons than I could possibly list. It’s a spiritual place for me, and for many others. It’s heaven and hell. It’s the dark side of skateboarding, the alpha and the omega. The force is strong there. I probably rode Burnside more than any other park in my lifetime so, of course, it’s my favorite; let alone the movement it started. I am proud to be a small part of that, very fuckin’ proud. In fact, it brings a goddamn tear to my eye. People all around the world are ripping their own creations harder and faster than ever. More and more DIY spots are born every day as our solar system spins out of control, throughout the ever-expanding galaxies. The Milky Way is host to a plethora of concrete continuums, creating chaos, yet giving us hope and order. In the times we live, I consider us very blessed to have this brotherhood of hard working creators. Never say forever, for we must fight to keep our moment from ever passing the hearts and minds of future generations. We have lots to learn, but we also have a little bit to teach and leave behind.

The one person that influenced me the most in creating and building skateparks would be ‘The Redneck,’ Mark Scott, hailing from Tigard, Oregon. I met him in 1985 at the Mt. Tabor Rebel Skates contest. My life was changed forever after he gave me a closet at his and Dahlgren’s apartment on Hawthorne in 1990. We had quite a crew and he has always been there for me. They broke the fucking mold when he surfaced the earth. From the core, too much honesty, too much integrity, too much brutal gnarlitude… My kids love him. I love him, and not just because he has inspired a nation of originality that helped keep skateboarding in our hands, but also because he’s never let me down. We always will be united against the corporate landscape architects and general contractors trying to ruin skateboarding through cookie-cutter, Sour Patch certified piece of shit parks lining their pockets with gold. We will never make money from skateparks. We will humbly survive, and everything we receive we will give back to skateboarding. That is the influence I have been lucky enough to receive. I also need to add Rabi, Shags, Mike Swim, Lil Eddie and Jay One since they have inspired me so much over the years with Grindline.

In case I wasn’t clear enough before, my favorite skatepark was, is and always will be my favorite, from the beginning until the end, BURN FUCKING SIDE. I also hold a place close to my heart for Orcas Island, Pine Ridge, Dylan, MT, Trinidad, CO, Cody, WY, Bob’s bowl and way too many more to mention. I could list hundreds of my favorite spots from Israel to Japan.

The biggest innovation in skatepark building over the years is skaters building skateparks. Skaters are innovative and ingenious when it comes to our obsession with design and construction/concrete techniques. Fifteen years ago, skaters that built concrete parks were few and far between. I think we left it to the shotcreters. Now we are shotcreters, nozzlemen, cutters, shapers, finishers, machine operators and iron workers. We’re all gonna die from Silicosis, but it’s for a good cause. Think you got what it takes to work your fingers to the fucking bone? We’ll chew you up and spit you out faster than you can say, “I should have went to college.” As for you landscape architects out there getting into skateparks because you think there’s money in it, there isn’t. Trust me. It’s a dog-eat-dog, low bid mess of losing money, hand over foot, if you do it right! Don’t let me taint your disillusions of grandeur. If you find money in it and you’re successful, shame on you, because you just ripped concrete out from under the children’s feet. Your overhead, your hidden costs, and your change orders are the only thing wrong with this industry, not to mention the mundane city approach of just checking the item off the list without really ever realizing how these projects, if done the right way, can and will change lives by building confidence in the youth, not to mention the positive outlook towards their communities after they go through the process and, actually, get more than what they paid for. A place to go, yes, but also a long lasting monument of total ride-able art sculpture to be enjoyed for generations to come. Again “something to be proud of.” Don’t just check it off the list. Overstep your boundaries and safety zone. Nothing great ever comes easy, but when we’re done with your town, there will be a long-lasting impression of realness left upon your community. Skateparks help build so much self-esteem in the youth culture. The kids of today are definitely blessed to have these facilities. Embrace the skatepark artists and live forever in the world that you have taken on as your own.

Nationwide snake runs connecting communities, pump bumps across the country, snake runs to school and skate paths from one side of town to the other. It’s self-generated power and environmentally acceptable. You can take your board on the bus or train. It’s a cost effective way of travel. I’ve been skating for 38 years and I can’t stand walking down a hill. On foot seems inefficient. Wake up. Lay back down. Go to sleep. The world is being anesthetized. We will build skateparks on the moon and then on Mars and, finally, into the cosmos where we once began as part of the primordial dust from the Big Bang. Ashes to ashes, dust to dust, as above, so below.

Nothing is ever obsolete in skateboarding. A curb is a curb and always will be a curb. A full pipe is the same thing, cradle, same, street plaza, same… Well, once lost but never forgotten, the runways of today will always mean something. Monuments of the past will soon be unearthed as we sit down and learn from before the days of our birth. Nothing new hasn’t been done. Something old has only begun. We form our opinions in what we want as a skater, but in the end, “Hate me now. Love me later.”

My favorite pool shape would have to be an amoeba, because it’s unrestricted, ever-flowing, untapped, untamed, large and in charge. Start digging and stop when you run outta room. Pool coping. I like Grindstone, but I’ve bought thousands of blocks of Tedder Stone, Federal Stone, Penrose, etc. Never had a bad time on any of ‘em.

That would be Skatercross. It’s a 10,000 square foot track with three full pipes connecting an over and under amoeba course with a start and a finish line, but also an awesome free ride giant bowl collision course. I’ve got the plans, but nobody’s got the balls. I might have to save that one for Skate Town. Also, Grindline small skateable sculptures are gonna go big.

Who’s on your crew right now?

I’ve got a six-person office staff and five foremen that have been with me for over 14 years. My field crew is myself, Benny and Brice Neiber, Andy Ferguson, Sage Bolyard, Andy Roy, Tony Johnston, Mike the Swami Swim and Derek Pollard. James Kliendenstein is my project manager and we just finished Bob Burnquist’s bowl. Shags is building a monster in Spring Park, Texas. Rabi is building Skate City in Denmark. Lil Eddie is building a skatepark in the snow near Pittsburgh and Tony and Swami are buttoning up Bingen, Washington, phase two. We’re losing our ass on all of ‘em. I’m gonna need to borrow some more money.

“My favorite backyard or do-it-yourself skatepark to skate is definitely burnside, of course, for more reasons than i could possibly list. it’s a spiritual place for me, and for many others. it’s heaven and hell. it’s the dark side of skateboarding, the alpha and the omega. the force is strong there.”

What is your Duty Now For The Future?

To continue this Life of Pain that began in 1975 on a sidewalk in Seattle. To the people I’ve met, the good times we’ve had, you know you’re having a good time when you look around and see your boys having a good time. This is only the beginning of the end of the beginning of the raddest world we could have created together. You are a creator, amidst the chaos. Congratulations. We did it. Now go out there and make some waves. 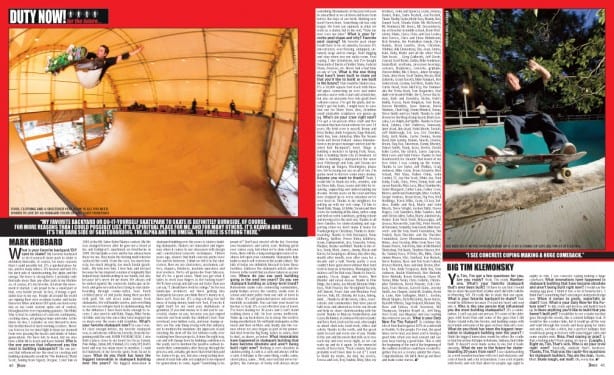