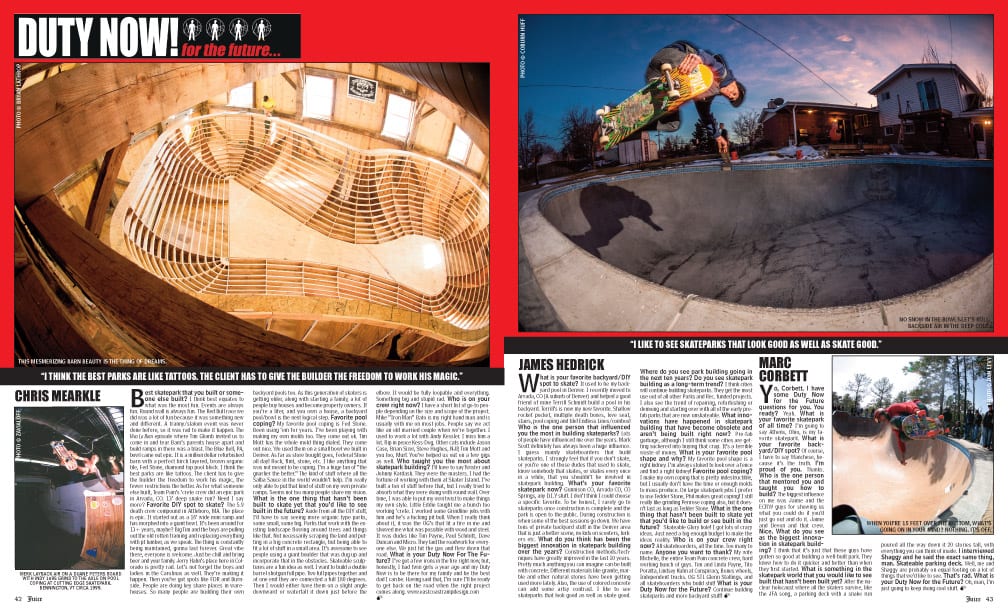 It used to be my backyard pool in Denver. I recently moved to Arvada, CO (A suburb of Denver) and helped a good friend of mine Terrill Schmidt build a pool in his backyard. Terrill’s is now my new favorite. Shallow rocket pocket, multiple death boxes, love seat, stairs, pool coping and tile! Endless Lines/combos!

Lots of people have influenced me over the years. Mark Scott definitely has always been a huge influence. I guess mainly skateboarders that build skateparks. I strongly feel that if you don’t skate, or you’re one of those dudes that used to skate, know somebody that skates, or skates every once in a while, that you shouldn’t be involved in skatepark building.

Gunnison CO, Arvada CO, CO Springs, any D.I.Y stuff. I don’t think I could choose a specific favorite. To be honest, I rarely go to skateparks once construction is complete and the park is open to the public. During construction is when some of the best sessions go down. We have tons of private backyard stuff in the Denver area that is just a better scene, no kids on scooters, lurkers etc.

Construction methods/techniques have greatly improved in the last 10 years. Pretty much anything you can imagine can be built with concrete. Different materials like granite, marble and other natural stones have been getting used more lately. Also, the use of colored concrete can add some artsy contrast. I like to see skateparks that look good as well as skate good.

I think cities will continue building skateparks. They get the most use out of all other Parks and Rec. funded projects. I also see the trend of repairing, refurbishing or demoing and starting over with all of the early pre-fab parks that are now unskateable.

Pre-fab garbage, although I still think some cities are getting suckered into buying that crap. It’s a terrible waste of money.

“I like to see skateparks that look good as well as skate good.”

I make my own coping that is pretty indestructible, but I usually don’t have the time or enough molds to mass produce. On large skatepark jobs I prefer to use Tedder Stone, Phil makes great coping! I still really like grinding Penrose coping also, but it doesn’t last as long as Tedder Stone.

Skateable Glory hole! I got lots of crazy ideas. Just need a big enough budget to make the ideas reality.

All skateboarders, all the time. Too many to name. 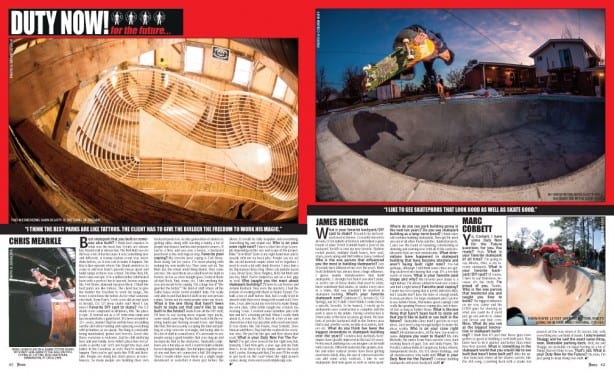