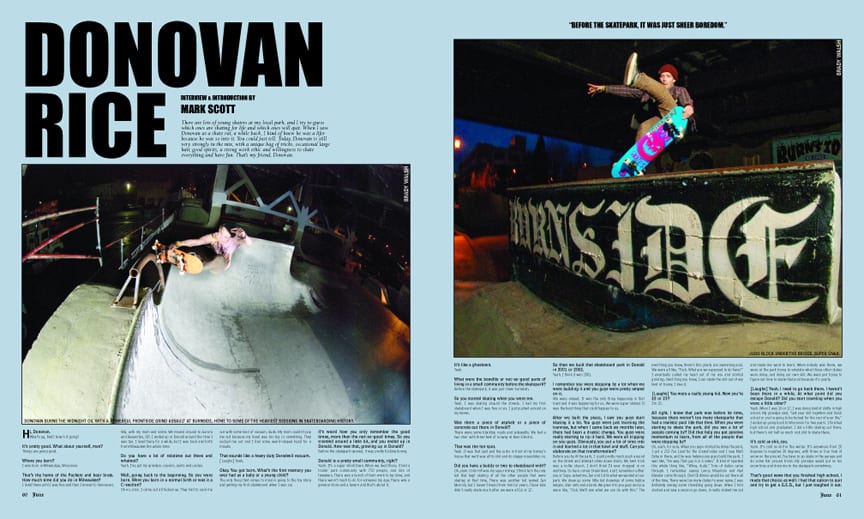 There are lots of young skaters at my local park, and I try to guess which ones are skating for life and which ones will quit. When I saw Donovan as a skate rat, a while back, I kind of knew he was a lifer because he was so into it. You could just tell. Today, Donovan is still very strongly in the mix, with a unique bag of tricks, occasional large hair, good spirits, a strong work ethic and willingness to skate everything and have fun. That’s my friend, Donovan.

“BURNSIDE IS ALWAYS THERE. I CAN SKATE THERE, RAIN OR SHINE, DAY OR NIGHT. IT’S PRETTY MUCH ALWAYS A GO. IT’S SUPER CONVENIENT AND IT’S THE SICKEST PARK EVER.”

It’s pretty good. What about yourself, man?
Things are going good.

Where you born?
I was born in Milwaukee, Wisconsin.

That’s the home of the Packers and beer brats. How much time did you do in Milwaukee?
I lived there until I was five and then I moved to Vancouver, WA, with my mom and sister. We moved around to Aurora and Beaverton, OR. I ended up in Donald around the time I was ten. I lived there for a while, but I was back and forth from Milwaukee the whole time.

Do you have a lot of relatives out there and whatnot?
Yeah. I’ve got my grandpa, cousins, aunts and uncles.

Well, going back to the beginning. So you were born. Were you born in a normal birth or was it a C-section?
Oh no, man. I came out all fucked up. They had to suck me out with some kind of vacuum, dude. My mom couldn’t pop me out because my head was too big or something. They sucked me out and I had some weird-shaped head for a minute.

That sounds like a heavy duty Daredevil vacuum.
[Laughs] Yeah.

Okay. You got born. What’s the first memory you ever had as a baby or a young child?
The only thing that comes to mind is going to the toy store and getting my first skateboard when I was six.

It’s weird how you only remember the good times, more than the not-so-good times. So you traveled around a little bit, and you ended up in Donald. How was that, growing up in Donald?
Before the skatepark opened, it was pretty fucking boring.

Donald is a pretty small community, right?
Yeah. It’s a super small town. When we lived there, it had a trailer park community with 750 people, and lots of tweakers. There was a bunch of farm work to be done, and there wasn’t much to do for someone my age. There was a general store and a tavern and that’s about it.

So you started skating when you were ten.
Yeah. I was skating around the streets. I had my first skateboard when I was five or six. I just pushed around on my knees.

Was there a piece of asphalt or a piece of concrete out there in Donald?
There were some blacktop roads and sidewalks. We had a two stair with three feet of runway at Bear Electric.

That was the hot spot.
Yeah. It was that spot and the curbs in front of my homey’s house that we’d wax all to shit and do slappy noseslides on.

Did you have a buddy or two to skateboard with?
Oh, yeah. Colin Hill was my super homey. I think he’s the only kid that kept skating of all the other people that were skating at that time. There was another kid named Ian Merrick, but I haven’t heard from him for years. Those kids didn’t really skate much after we were all 16 or 17.

I remember you were stopping by a lot when we were building it and you guys were pretty amped on it.
We were amped. It was the only thing happening in that town and it was happening for us. We were super stoked. It was the best thing that could happen to us.

After we built the place, I saw you guys start skating it a bit. You guys were just learning the trannies, but when I came back six months later, there had been a drastic change. You guys were really starting to rip it hard. We were all tripping on you guys. Obviously, you put a lot of time into it and learned a lot in that bowl and stuff. Can you elaborate on that transformation?
Before you built the park, I could pretty much push around on the street and attempt ollies down stairs. My best trick was a nollie shuv-it. I don’t think I’d ever dropped in on anything. So here comes Dreamland, and I remember either you or Sage, asked me, Ian and Collin what we wanted at our park. We drew up some little kid drawings of some hubba ledges, stair sets and a bank. We gave it to you guys and you were like, “Sick. We’ll see what we can do with this.” The next thing you know, there’s this gnarly ass swimming pool. We were all like, “Fuck. What are we supposed to do here?” I eventually pulled my head out of my ass and started grinding. Next thing you know, I can skate the shit out of any kind of tranny. I love it.