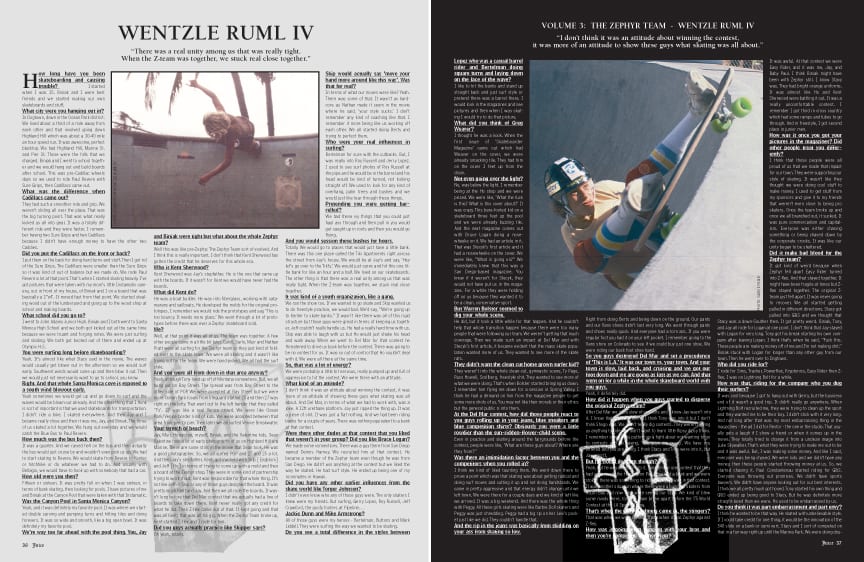 How long have you been skateboarding and causing trouble?
I started when I was 15. Biniak and I were best friends and we started making our own skateboards and stuff.

What city were you hanging out in?
In Dogtown, down in the Ocean Park district. We lived about a third of a mile away from each other and that involved going down Highland Hill which was about a 30-40 mile an hour speed run. It was awesome, perfect blacktop. We had Highland Hill, Marine St. and Pier St. Those were the hills that we charged. Biniak and I went to school together and we would hang out and build boards after school. This was pre-Cadillac wheels days so we used to ride Paul Revere with Sure Grips, then Cadillacs came out.

“I DON’T THINK IT WAS AN ATTITUDE ABOUT WINNING THE CONTEST, IT WAS MORE OF AN ATTITUDE TO SHOW THESE GUYS WHAT SKATING WAS ALL ABOUT.”

What was the difference when Cadillacs came out?
They had such a smoother ride and grip. We weren’t sliding all over the place. That was the big turning point. That was what really kicked us all into gear. It was a totally different ride and they were faster. I remember having two Sure Grips and two Cadillacs because I didn’t have enough money to have the other two Caddies.

Did you put the Cadillacs on the front or back?
I put them on the back for doing hard turns and stuff. Then I got rid of the Sure Grips. The Cadillacs were smaller than the Sure Grips so it was kind of out of balance but we made do. We rode Paul Revere a lot at that point. That’s when I started skating heavily. I’ve got pictures that were taken with my mom’s little Instamatic camera, out in front of my house, of Biniak and I on a board that was basically a 2×4. It moved fast from that point. We started stealing wood out of the lumberyard and going up to the wood shop at school and making boards.

What school did you go to?
I went to John Adams Junior High. Biniak and I both went to Santa Monica High School and we both got kicked out at the same time because we were truant and forging notes. We were just surfing and skating. We both got booted out of there and ended up at Olympic H.S.

You were surfing long before skateboarding?
Yeah. It’s almost like what Stacy said in the movie. The waves would usually get blown out in the afternoon so we would surf early. Southwest winds would come up and then blow it out. Then we would just not necessarily want to go to school, you know.

Right. And that whole Santa Monica cove is exposed to a south wind blowout early.
Yeah sometimes we would get up and go down to surf and the waves would be blown out already. And the other thing that I think is sort of important is that we used skateboards for transportation. I didn’t ride a bike. I skated everywhere. And then Jay and I became really close and then it was me, Jay, and Biniak. The three of us skated a lot together. We hung out everyday and we would catch the Blue Bus to Paul Revere.

How much was the bus back then?
It was a quarter. And we raised hell on the bus and then actually the bus would just cruise by and wouldn’t even pick us up. We had to start skating to Revere. We would skate from Revere to Kenter or hitchhike or do whatever we had to do. And usually with Bellagio, we would have to hook up with somebody that had a car.

How old were you then?
Fifteen or sixteen. It was pretty full on when I was sixteen, in terms of bank skating, then looking for pools. I have pictures of me and Biniak at the Canyon Pool that were taken with that Instamatic.

You, Jay and Biniak were tight but what about the whole Zephyr team?
Well this was like pre-Zephyr. The Zephyr Team sort of evolved. And I think this is really important. I don’t think that Kent Sherwood has gotten the credit that he deserves for this whole era.

Who is Kent Sherwood?
Kent Sherwood was Jay’s stepfather. He is the one that came up with the boards. If it wasn’t for Kent we would have never had the boards.

What did Kent do?
He was a boat builder. He was into fiberglass, working with catamarans and sailboats. He developed the molds for the original prototypes. I remember we would ride the prototypes and say, ‘This is too bouncy. It needs more glass.’ We went through a lot of prototypes before there was ever a Zephyr skateboard sold.

We?
Well, at that point it was all of us. The team was together. A few other people came in a little bit later. Cahill, Sarlo, Muir and Nathan Pratt were all surfing for the Zephyr team so they just kind of folded over to the skate team. We were all skating and it wasn’t like trying out for the team. We were hand-picked. We all had the surf style.