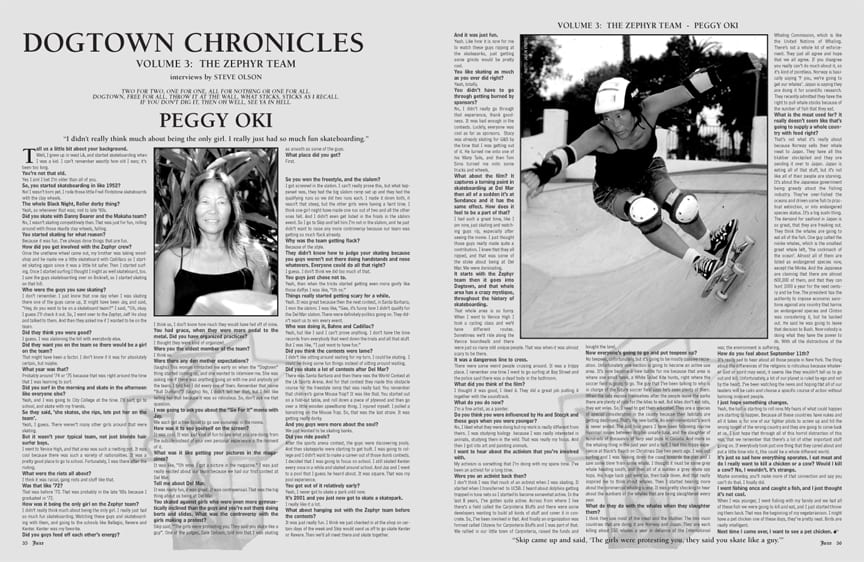 TWO FOR TWO, ONE FOR ONE, ALL FOR NOTHING OR ONE FOR ALL. DOGTOWN, FREE FOR ALL, THROW IT AT THE WALL, WHAT STICKS, STICKS AS I RECALL. IF YOU DON’T DIG IT, THEN OH WELL, SEE YA IN HELL.

Tell us a little bit about your background.
Well, I grew up in west LA, and started skateboarding when I was a kid. I can’t remember exactly how old I was; it’s been too long.

You’re not that old.
Yes I am! I bet I’m older than all of you.So, you started skateboarding in like 1952?
No! I wasn’t born yet. I rode those little Fred Flintstone skateboards with the clay wheels.

“I DIDN’T REALLY THINK MUCH ABOUT BEING THE ONLY GIRL. I REALLY JUST HAD SO MUCH FUN SKATEBOARDING.”

The whole Black Night, Roller derby thing?
Yeah, so whenever that was; mid to late ’60s.

Did you skate with Danny Bearer and the Makaha team?
No, I wasn’t skating competitively then. That was just for fun, rolling around with those deadly clay wheels, falling.

You started skating for what reason?
Because it was fun. I’ve always done things that are fun.

Who were the guys you saw skating?
I don’t remember. I just know that one day when I was skating there one of the guys came up, It might have been Jay, and said, “Hey, do you want to be on a skateboard team?” I said, “Oh, okay. I guess I’ll check it out. So, I went over to the Zephyr, Jeff Ho shop and talked to them. And then they asked me if I wanted to be on the team.

Did they think you were good?
I guess. I was slaloming the hill with everybody else.

Did they want you on the team so there would be a girl on the team?
That might have been a factor. I don’t know if it was for absolutely certain, but maybe.

What year was that?
Probably around ’74 or ’75 because that was right around the time that I was learning to surf.

Did you surf in the morning and skate in the afternoon like everyone else?
Yeah, and I was going to City College at the time. I’d surf, go to school, and skate with my friends.

So they said, ‘she skates, she rips, lets put her on the team’.
Yeah, I guess. There weren’t many other girls around that were skating.

But it wasn’t your typical team, not just blonde hair surfer boys.
I went to Venice High, and that area was such a melting pot. It was cool because there was such a variety of nationalities. It was a pretty good place to go to school. Fortunately, I was there after the rioting.

What were the riots all about?
I think it was racial, gang riots and stuff like that.