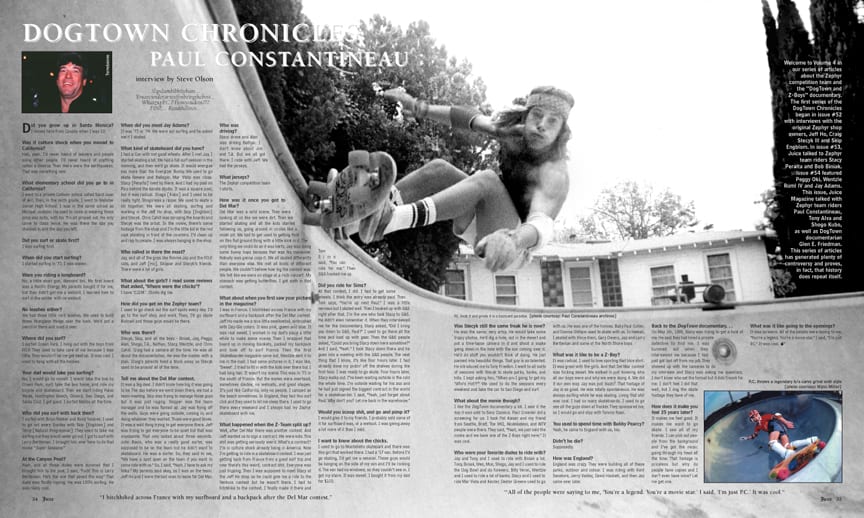 Did you grow up in Santa Monica?
I moved here from Canada when I was 10.

“I HITCHHIKED ACROSS FRANCE WITH MY SURFBOARD AND A BACKPACK AFTER THE DEL MAR CONTEST.”

What elementary school did you go to in California?
I went to a private Catholic school called Saint Joan of Arc. Then, in the ninth grade, I went to Webster Junior High School. I was in the same school as Michael Jackson. He used to come in wearing these pimp ass suits, with his ‘fro all pimped out. He only came to class twice. He was there the day you checked in and the day you left.

Did you surf or skate first?
I was surfing first.

When did you start surfing?
I started surfing in ’72. I was eleven.

Were you riding a longboard?
No, a little short gun, diamond tail. My first board was a Pacific Energy. My parents bought it for me, but they didn’t get me a wetsuit. I learned how to surf in the winter with no wetsuit.

No leashes either?
They had those little cord leashes. We used to build those fiberglass things over the back. We’d put a pencil in there and mold it over.

Where did you surf?
I surfed Ocean Park. I hung out with the boys from P.O.P. They used to take care of me because I was little. They wouldn’t let me get beat up. It was cool. I used to hang with all the homies.

Your dad would take you surfing?
No, I would go by myself. I would take the bus by Ocean Park, surf, take the bus home, and ride my bicycle. Then I would skateboard. Then we start riding Palos Verdes, Huntington Beach, Oxnard, San Diego, and Santa Cruz. I got good. I surfed Malibu all of the time.

Who did you surf with back then?
I surfed with Brian Walker and Ricky Tavares. I used to go out every Sunday with Skip [Engblom] and Terry [Natural Progression]. They used to take me surfing but they would never go out. I got to surf with Larry Bertleman. I brought him over here to do that movie “Super Sessions”.

At the Canyon Pool?
Yeah, and all those dudes were bummed that I brought him to the pool. I said, “Fuck! This is Larry Bertleman. He’s the one that paved the way.” That dude was fluidly ripping. He was 100% surfing. He was really cool.

What kind of skateboard did you have?
I had a Con with not good wheels. After I met Jay, I started skating a lot. We had a full surf session in the morning, and then we’d go skate. It would energize you more than the Energizer bunny. We used to go skate Revere and Bellagio. And Mar Vista was close. Stacy lived by there. And I had my pool on Pico behind the karate studio. It was a square pool, but it was radical. And Shogo and I used to be really tight. Shogo was a ripper. We used to skate a lot together. We’re all skating and surfing and working in the Jeff Ho shop, with Skip and Stecyk. Chris Cahill is spraying the boards and Stecyk was the artist. In the movie, there’s some footage from the shop and I’m the little kid in the red coat standing in front of the counters. I would clean up and rap to people. I was always hanging in the shop.

Who rolled in there the most?
Jay, and all of the guys like Ronnie Jay and the P.O.P. cats, and Jeff, Skipper and Stecyk’s friends. There were a lot of girls.
What about the girls? I read some reviews on the film that asked,

“Where were the chicks”?
I have CDM. Chicks dig me.

How did you get on the Zephyr team?
I used to go check out the surf spots every day. I’d go to the surf shop and work. Then, I’d go skate Bicknell. And those guys would be there.

Who was there?
Craig Stecyk, Skip Engblom, and all the boys – Biniak, Jay, Peggy, Alan, Shogo, T.A., Nathan, Stacy, Wentzle, and Chris Cahill. Craig had a camera all the time. He was all about the documentation. He was the master with a plan. Craig’s parents lived a block away so Stecyk used to be around all of the time.

Tell me about the Del Mar contest.
It was a big deal. I didn’t know how big it was going to be. And the day before we went down there, we had a team meeting. Skip was trying to manage those guys. It was just raging. Skipper was the team manager and he was flamed up. Jay was flying off the walls. Guys were going outside, coming in, and doing whatever they wanted. Those were good times. It was a wild thing trying to get everyone there. Jeff’s trying to get everyone to be quiet. That was impossible. That only lasted about three seconds. John Baum, who was a really good surfer, was supposed to be on the team but he didn’t want to skateboard. He was a surfer. So, they said to me, “We have a spot open on the team if you want to come ride with us.” So, I said, “Yeah. I have to ask my folks.” My parents said okay, so I was on the team. Jeff Ho and I were the last ones to leave for Del Mar.

Who was driving?
Stacy drove and Alan was driving Nathan. I don’t know about Jim and T.A. But we all got there. I rode with Jeff. We had the jerseys.

How was it once you got to Del Mar?
Del Mar was a wild scene. They were looking at us like we were dirt. They were like, “What are these guys doing?” And then we started skating. And all of the little kids started following us going around in circles like a mosh pit. We had to get used to getting fluid on this flat ground thing with a little kink in it. The only thing we could do on it was berts. Jay was doing some bunny hops because that was his maneuver. Nobody was gonna copy it. We skated differently from everyone else. And we met all kinds of different people. We couldn’t believe how big the contest was. We felt like we were on stage at a rock concert. My stomach was getting butterflies. I got sixth in that contest. And the first night Honk played. It was smoking. Those dudes were all partying. But, I didn’t even get to go to the concert. I was too young to get in.