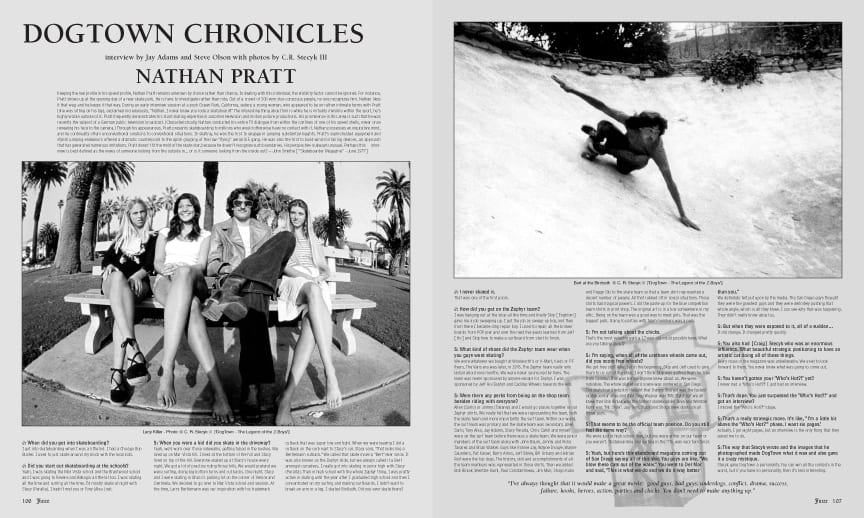 “Keeping the low profile in his speed profile, Nathan Pratt remains unknown by choice rather than chance. In dealing with this individual, the visibility factor cannot be ignored. For instance, Pratt shows up at the opening day of a new skate park. He is here to investigate rather than ride. Out of a crowd of 300 very star-conscious people, no one recognizes him. Nathan likes it that way, and he keeps it that way. During an early interview session at a posh Ocean Park, California, eatery, a young woman, who appeared to be on rather intimate terms with Pratt (she was sitting on his lap), exclaimed incredulously, “Nathan, I never knew you rode a skateboard!” The interesting thing about him is while he is virtually invisible within the sport, he’s highly visible outside of it. Pratt frequently demonstrates his stunt skating expertise in assorted television and motion picture productions. His prominence in this area is such that he was recently the subject of a German public television broadcast. (Characteristically, Nathan conducted his entire TV dialogue from within the confines of one of his speed shells, never once revealing his face to the camera.) Through his appearances, Pratt presents skateboarding to millions who would otherwise have no contact with it. Nathan possesses an inquisitive mind, and he continually offers unconventional solutions to conventional situations. In skating, he was the first to engage in jumping substantial heights. Pratt’s sophisticated equipment and stylish jumping endeavors offered a dramatic counterpoint to the apish gripping of the low-”flying” aerial B.F. gang. He was also the first to build wind-foil fairing devices, an approach that has generated numerous imitations. Pratt doesn’t fit the mold of the skate star, because he doesn’t recognize such boundaries. His perspective is always unusual. Perhaps this interview is best defined as the views of someone looking from the outside in… or is it someone looking from the inside out?” – John Smythe – Skateboarder Magazine – June 1977

When you were a kid did you skate in the driveway?
Yeah, we’d work over those sidewalks, getting tubed in the bushes. We lived up on Mar Vista hill. I lived at the bottom of the hill and Stacy lived on top of the hill. Everyone skated up at Stacy’s house every night. We got a lot of practice riding those hills. We would pretend we were surfing, doing big bottom turns and cut backs. One night, Stacy and I were skating in Bruno’s parking lot on the corner of Venice and Centinela. We decided to go over to Mar Vista school and session. At the time, Larry Bertlemann was our inspiration with his trademark cutback that was super low and tight. When we were leaving I did a cutback on the curb next to Stacy’s car. Stacy said, “That looks like a Bertlemann cutback.” We called that skate move a “Bert” ever since. It was also known as the Zephyr slide, but we always called it a Bert amongst ourselves. I really got into skating in junior high with Stacy (Peralta). Then in high school with the whole Zephyr thing. I was pretty active in skating until the year after I graduated high school and then I concentrated on my surfing and making surfboards. I didn’t want to break an arm or a leg. I skated Birdbath. Did you ever skate there?

I never skated it.
That was one of the first pools.

How did you get on the Zephyr team?
I was hanging out at the shop all the time and finally Skip [Engblom] gave me a job sweeping up. I got the job as sweep-up boy, and then from there I became ding repair boy. I used to repair all the broken boards from POP pier and over the next five years learned from Jeff [Ho] and Skip how to make a surfboard from start to finish.

Were there any perks from being on the shop team besides riding with everyone?
Allen (Sarlo) or Jimmy (Tavarez) and I would go places together in our Zephyr shirts. We really felt that we were representing the team, both the skate team and more importantly the surf team. Within our world, the surf team was primary and the skate team was secondary. Allen Sarlo, Tony Alva, Jay Adams, Stacy Peralta, Chris Cahill and myself were on the surf team before there was a skate team. We were junior members of the surf team along with John Baum, Jimmy and Ricky Tavarez and Brian Walker. Guys like Ronnie Jay, Wayne Inouye, Wayne Saunders, Pat Kaiser, Barry Amos, Jeff Sibley, Bill Urbany and Adrian Reif were the top dogs. The history, skill and accomplishments of all the team members was represented in those shirts. Then we added Bob Biniak, Wentzle Ruml, Paul Constantineau, Jim Muir, Shogo Kubo and Peggy Oki to the skate team so that a team shirt represented a decent number of people. All that rubbed off in social situations. Those shirts had magical powers. I did the paste up for the blue competition team shirts in print shop. The original art is in a box somewhere in my attic. Being on the team was a good way to meet girls. That was the biggest perk. Going to parties with team members was a perk.

I’m not talking about the chicks.
That’s the most valuable perk a 17-year-old could possibly have. What are you talking about?

I’m saying, when all of the urethane wheels came out, did you score free wheels?
We got free stuff later, but in the beginning, Skip and Jeff used to give them to us out of the shop. I don’t think Skip was getting them for free from Cadillac. This was before anyone knew about us. We were nobodies. The whole skateboard scene was centered in San Diego. The skateboard industry thought that Dennis Shufeld was the fastest skateboarder alive and that Greg Weaver was “Mr. Style” but we all knew that Bob Biniak was the fastest skateboarder alive and Wentzle Ruml was “Mr. Style”. Jay, Tony, Stacy and Shogo blew doors on all those guys.

That seems to be the official team position. Do you still feel the same way?
We were just in high school then, but you were either on our team or you weren’t. Skateboarding and surfing in the ’70s was very territorial.

Yeah, but here’s this skateboard magazine coming out of San Diego saying all of this shit. You guys are like, “We blow these cats out of the water.” You went to Del Mar and said, “This is what we do and we do it way better than you.”
We definitely felt put upon by the media. The San Diego guys thought they were the greatest guys and they were definitely pushing that whole angle, which is all they knew. I can see why that was happening. They didn’t really know about us.

But when they were exposed to it, all of a sudden,
It did change. It changed pretty quickly.

You also had [Craig] Stecyk who was an enormous influence. What beautiful strategic positioning to have an artistic cat doing all of these things.
Every issue of the magazine was unbelievable. We used to look forward to them. You never knew what was going to come out.