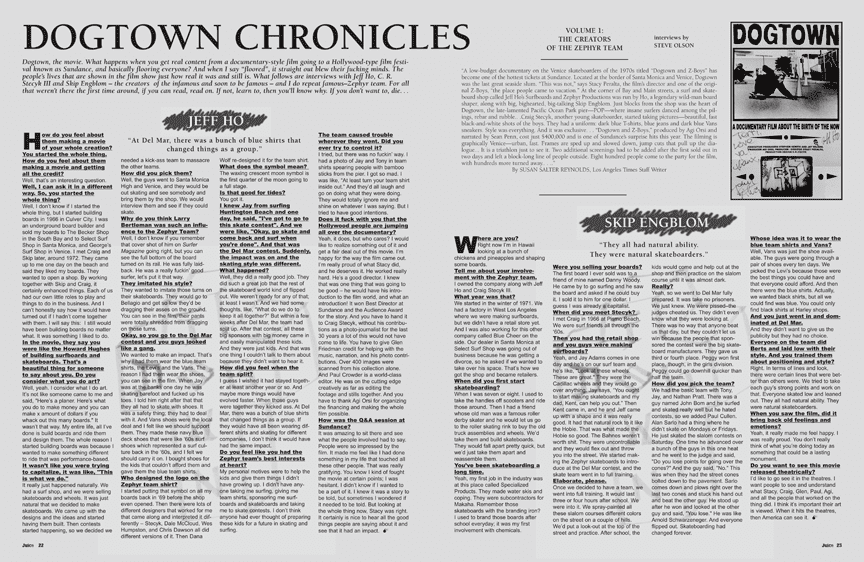 Welcome to our series of articles about the Zephyr competition team and the “DogTown and Z-Boys” documentary. The first series of the DogTown Chronicles began in issue 52 featuring interviews with the original Zephyr shop owners, Jeff Ho, Craig Stecyk III and Skip Engblom. In issue 53, Juice talked to Zephyr team riders Stacy Peralta and Bob Biniak. Issue 54 featured Z-Girl Peggy Oki and Z-Boys – Wentzle Ruml IV and Jay Adams. Issue 55, Juice Magazine talked with Zephyr team riders Paul Constantineau, Tony Alva and Shogo Kubo, as well as DogTown documentarian Glen E. Friedman. Issue 56, Nathan Pratt tells his side of the Dogtown story. Issue 57, Allen Sarlo gives his perspective on the documentary and the classic style of The Z-Boys – the ultimate instigators of aggressive surfing and skating. In issue 58, Chris Cahill talks about why he was left out of the movie completely. This series of articles has generated plenty of controversy and proves, in fact, that history does repeat itself…

How do you feel about them making a movie and getting all the credit?
Well, that’s an interesting question.

Well, I can ask it in a different way. So, you started the whole thing?
Well, I don’t know if I started the whole thing, but I started building boards in 1966 in Culver City. I was an underground board builder and sold my boards to The Becker Shop in the South Bay and to Select Surf Shop in Santa Monica, and George’s Surf Shop in Venice. I met Craig and Skip later, around 1972. They came up to me one day on the beach and said they liked my boards. They wanted to open a shop. By working together with Skip and Craig, it certainly enhanced things. Each of us had our own little roles to play and things to do in the business. And I can’t honestly say how it would have turned out if I hadn’t come together with them. I will say this: I still would have been building boards no matter what. It was something I liked to do.

“AT DEL MAR, THERE WAS A BUNCH OF BLUE SHIRTS THAT CHANGED THINGS AS A GROUP.”

In the movie, they say you were like the Howard Hughes of building surfboards and skateboards.That’s a beautiful thing for someone to say about you. Do you consider what you do art?
Well, yeah. I consider what I do art. It’s not like someone came to me and said, “Here’s a planer. Here’s what you do to make money and you can make x amount of dollars if you whack out this many boards.” It wasn’t that way. My entire life, all I’ve done is build boards and ride them and design them. The whole reason I started building boards was because I wanted to make something different to ride that was performance-based.

It wasn’t like you were trying to capitalize, it was like, “This is what we do.”
It really just happened naturally. We had a surf shop, and we were selling skateboards and wheels. It was just natural that we decided to make skateboards. We came up with the designs and the ideas and started having them built. Then contests started happening, so we decided we needed a kick-ass team to massacre the other teams.

How did you pick them?
Well, the guys went to Santa Monica High and Venice, and they would be out skating and see somebody and bring them by the shop. We would interview them and see if they could skate.

Why do you think Larry Bertleman was such an influence to the Zephyr Team?
Well, I don’t know if you remember that cover shot of him on Surfer Magazine going right, but you can see the full bottom of the board turned on its rail. He was fully laid-back. He was a really fuckin’ good surfer, let’s put it that way.

They imitated his style?
They wanted to imitate those turns on their skateboards. They would go to Bellagio and get so low they’d be dragging their asses on the ground. You can see in the film, their pants were totally shredded from dragging on those turns.

Okay, so you go to the Del Mar contest and you guys looked like a gang.
We wanted to make an impact. That’s why I had them wear the blue team shirts, the Levi’s and the Vans. The reason I had them wear the shoes, you can see in the film. When Jay was at the banks one day he was skating barefoot and fucked up his toes. I told him right after that that they all had to skate with shoes. It was a safety thing; they had to deal with it. And Vans shoes were the local deal and I felt like we should support them. They made these navy blue deck shoes that were like ’60s surf shoes which represented a surf culture back in the ’60s, and I felt we should carry it on. I bought shoes for the kids that couldn’t afford them and gave them the blue team shirts.

Who designed the logo on the Zephyr team shirt?
I started putting that symbol on all my boards back in ’69 before the shop even opened. Then there were lots of different designers that worked for me that came along and interpreted it differently – Stecyk, Dale McCloud, Wes Humpston, and Chris Dawson all did different versions of it. Then Dana Wolf re-designed it for the team shirt.

What does the symbol mean?
The waxing crescent moon symbol is the first quarter of the moon going to a full stage.

Is that good for tides?
You got it.

I knew Jay from surfing Huntington Beach and one day, he said, “I’ve got to go to this skate contest”. And we were like, “Okay, go skate and come back and surf when you’re done”. And that was the Del Mar contest. Suddenly, the impact was on and the skating style was different. What happened?
Well, they did a really good job. They did such a great job that the rest of the skateboard world kind of flipped out. We weren’t ready for any of that; at least I wasn’t. And we had some thoughts, like, “What do we do to keep it all together?” But within a few weeks after Del Mar, the team had split up. After that contest, all these big sponsors with big money came in and easily manipulated these kids. And they were just kids. And that was one thing I couldn’t talk to them about because they didn’t want to hear it.

How did you feel when the team split?
I guess I wished it had stayed together at least another year or so. And maybe more things would have evolved faster. When those guys were together they kicked ass. At Del Mar, there was a bunch of blue shirts that changed things as a group. If they would have all been wearing different shirts and skating for different companies, I don’t think it would have had the same impact.

Do you feel like you had the Zephyr team’s best interests at heart?
My personal motives were to help the kids and give them things I didn’t have growing up. I didn’t have anyone taking me surfing, giving me team shirts, sponsoring me surfboards and skateboards and taking me to skate contests. I don’t think anyone had ever thought of preparing these kids for a future in skating and surfing.

The team caused trouble wherever they went. Did you ever try to control it?
I tried, but there was no fuckin’ way. I had a photo of Jay and Tony in team shirts spearing people with bamboo sticks from the pier. I got so mad. I was like, “At least turn your team shirt inside out.” And they’d all laugh and go on doing what they were doing. They would totally ignore me and shine on whatever I was saying. But I tried to have good intentions.

Does it fuck with you that the Hollywood people are jumping all over the documentary?
Yeah, it does, but who cares? I would like to realize something out of it and get a fair deal out of this movie. I’m happy for the way the film came out. I’m really proud of what Stacy did, and he deserves it. He worked really hard. He’s a good director. I knew that was one thing that was going to be good – he would have his introduction to the film world, and what an introduction! It won Best Director at Sundance and the Audience Award for the story. And you have to hand it to Craig Stecyk, without his contributions as a photo-journalist for the last 30 years a lot of this would not have come to life. You have to give Glen Friedman credit for helping with the music, narration, and his photo contributions. Over 400 images were scanned from his collection alone. And Paul Crowder is a world-class editor. He was on the cutting edge creatively as far as editing the footage and stills together. And you have to thank Agi Orsi for organizing the financing and making the whole film possible.

How was the Q and A session at Sundance?
It was amazing to sit there and see what the people involved had to say. People were so impressed by the film. It made me feel like I had done something in my life that touched all these other people. That was really gratifying. You know I kind of fought the documentary at certain points; I was hesitant. I didn’t know if I wanted to be a part of it. I knew it was a story to be told, but sometimes I wondered if it needed to be told. But looking at the whole thing now, Stacy was right. It certainly is nice to hear all the good things people are saying about it and see that it had an impact.