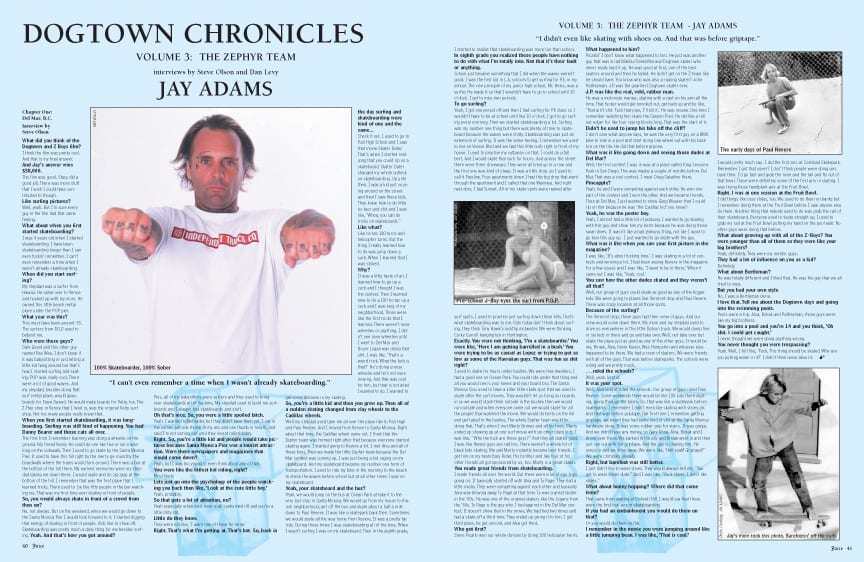 Welcome to our series of articles about the Zephyr competition team and the “DogTown and Z-Boys” documentary. The first series of the DogTown Chronicles began in issue 52 featuring interviews with the original Zephyr shop owners, Jeff Ho, Craig Stecyk III and Skip Engblom. In issue 53, Juice talked to Zephyr team riders Stacy Peralta and Bob Biniak. Issue 54 featured Z-Girl Peggy Oki and Z-Boys – Wentzle Ruml IV and Jay Adams. Issue 55, Juice Magazine talked with Zephyr team riders Paul Constantineau, Tony Alva and Shogo Kubo, as well as DogTown documentarian Glen E. Friedman. Issue 56, Nathan Pratt tells his side of the Dogtown story. Issue 57, Allen Sarlo gives his perspective on the documentary and the classic style of The Z-Boys – the ultimate instigators of aggressive surfing and skating. In issue 58, Chris Cahill talks about why he was left out of the movie completely. This series of articles has generated plenty of controversy and proves, in fact, that history does repeat itself…

What did you think of the Dogtown and Z Boys film?
I think the film was pretty cool. And that is my final answer.

And Jay’s answer wins $58,000.
The film was good. Stacy did a good job. There was more stuff that I wish I could have contributed to though.

Like surfing pictures?
Well, yeah. But I’m sure every guy in the film had that same feeling.

When did you start surfing?
My stepdad was a surfer from Hawaii. He came over to Venice and hooked up with my mom. He owned this little beach rental place under the POP pier.

What year was this?
This must have been around ’65. The surfers from P.O.P. used to babysit me.

Who were these guys?
Dale Grant and this other guy named Pee Wee. I don’t know if it was babysitting or just letting a little kid hang around but that’s how I started surfing and skating. POP was really cool. There were a lot of good waves. And my stepdad, besides doing that surf rental place, would glass boards for Dave Sweet. He would make boards for Velzy, too. The Z-Flex shop in Venice that I lived in, was the original Velzy surf shop. Not too many people really know that.

When you first started skateboarding, it was longboarding. Surfing was still kind of happening. You had Danny Bearer and those cats all over.
The first trick I remember learning was doing a wheelie on the ground. My friend Kenny Ho could do one like five or six cracks long on the sidewalk. Then I used to go skate by the Santa Monica Pier. It used to have this hill right by the merry-go-round by the boardwalk where the trams would turn around. There was a bar at the bottom of the hill there. My earliest memories were my stepdad taking me down there. I would skate and do zig-zags at the bottom of the hill. I remember that was the first place that I learned tricks. There used to be like fifty people in the bar watching me. That was my first time ever skating in front of people.

So, you would always skate in front of a crowd from then on?
No, not always. But on the weekend, when we would go down to the Santa Monica Pier I would look forward to it. I started digging that energy of skating in front of people. Kids like to show off. Skateboarding was pretty much a daily thing for me besides surfing. Yeah.

And that’s how you got around?
Plus, all of my babysitters were surfers and they used to bring over skateboards all of the time. My stepdad used to build me surfboards and I always had skateboards and stuff.

Oh that’s nice. So, you were a little spoiled bitch.

Right. So, you’re a little kid and people would take pictures because Santa Monica Pier was a tourist attraction. Were there newspapers and magazines that would come down?

Yeah, but I was too young to even think about any of that.

Lets just go into the psychology of the people watching you back then like, ‘Look at the cute little boy.’
Yeah, probably.

So that gets a lot of attention, no?
Yeah, especially when your nose is all sunburned off and you’re a little dirty rat. Little do they know.

They were not like, ‘I want one of those for mine.’

That’s what I’m getting at. That’s hot. So, back in the day surfing and skateboarding were kind of one and the same…
Check it out. I used to go to Pali High School and I saw that movie “SkaterDater.” That’s when I started realizing that you could rip on a skateboard. “SkaterDater” changed my whole outlook on skateboarding. Up until then, I was a kid just cruising around on the street and then I saw these kids. They knew how to do little tic-tacs and shit and I was like, “Whoa, you can do tricks on skateboards.”

Like what?
Like tic-tac 180 turns and helicopter turns, but the thing I really learned how to do was jump down a curb. When I learned that, I was stoked.

Why?
It was a little taste of air. I learned how to go up a curb and I thought I was the coolest. Then I learned how to do a 180 tic-tac up a curb and I was king of my neighborhood. Those were like the first tricks that I learned. There weren’t nose wheelies or anything. I didn’t see nose wheelies until I went to Del Mar and Bruce Logan was doing that shit. I was like, ‘That’s a weird trick. What the fuck is that?’ He’s doing a nose wheelie and he’s not even moving. That was cool for him, but that is not what I wanted to do. I wanted to get some distance in my skating.

So, you’re a little kid and then you grew up. Then, all of a sudden, skating changed from clay wheels to the Cadillac wheels.
Well, my stepdad used take me all over the place, like to Pali High and Paul Revere. I moved from Venice to Santa Monica. Right about that time, the Cadillac wheel came out. I think that the Zephyr team was formed right after that because everyone started skating again. I started going to Revere a lot. I met Alva and all of those boys. Then we made the little Zephyr team because the Del Mar contest was coming up. I was just being a kid raging on my skateboard. And my skateboard became my number one form of transportation. I used to ride my bike in the morning to the beach to check the waves before school but, at all other times, I was on my skateboard.

Yeah, your skateboard and the bus?
Yeah, we would jump on the bus at Ocean Park at take it to the very last stop in Santa Monica. We would go from my house to this rich neighborhood, get off the bus and skate about a half a mile down to Paul Revere. It was like a skatepark back then. Sometimes we would skate all the way home from Revere. It was a pretty far ride. During those times I was skateboarding all of the time. When I wasn’t surfing I was on my skateboard. Then in the eighth grade, I started to realize that skateboarding was more fun than school.