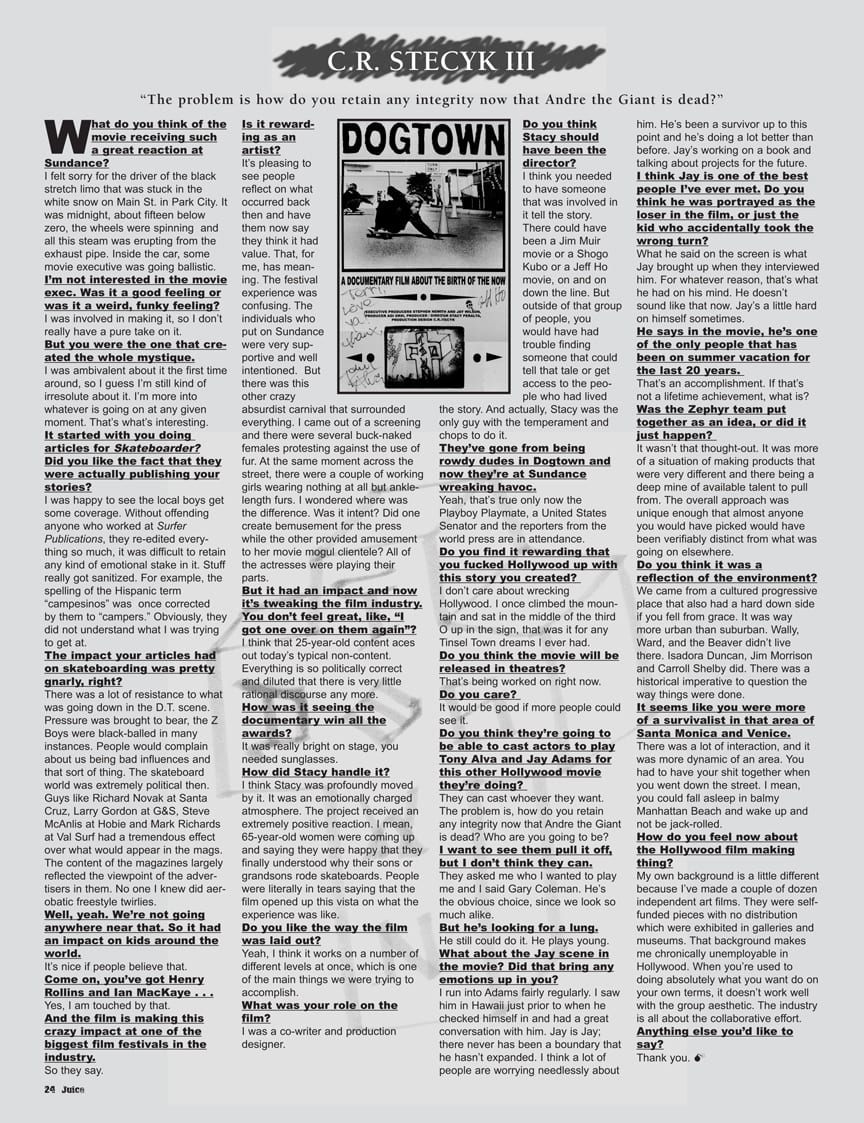 What do you think of the movie receiving such a great reaction at Sundance?
I felt sorry for the driver of the black stretch limo that was stuck in the white snow on Main St. in Park City. It was midnight, about fifteen below zero, the wheels were spinning and all this steam was erupting from the exhaust pipe. Inside the car, some movie executive was going ballistic.

“THE PROBLEM IS HOW DO YOU RETRAIN ANY INTEGRITY NOW THAT ANDRE THE GIANT IS DEAD?”

I’m not interested in the movie exec. Was it a good feeling or was it a weird, funky feeling?
I was involved in making it, so I don’t really have a pure take on it.

But you were the one that created the whole mystique.
I was ambivalent about it the first time around, so I guess I’m still kind of irresolute about it. I’m more into whatever is going on at any given moment. That’s what’s interesting.

It started with you doing articles for “Skateboarder”? Did you like the fact that they were actually publishing your stories?
I was happy to see the local boys get some coverage. Without offending anyone who worked at Surfer Publications, they re-edited everything so much, it was difficult to retain any kind of emotional stake in it. Stuff really got sanitized. For example, the spelling of the Hispanic term “campesinos” was once corrected by them to “campers.” Obviously, they did not understand what I was trying to get at.

The impact your articles had on skateboarding was pretty gnarly, right?
There was a lot of resistance to what was going down in the D.T. scene. Pressure was brought to bear, the Z Boys were black-balled in many instances. People would complain about us being bad influences and that sort of thing. The skateboard world was extremely political then. Guys like Richard Novak at Santa Cruz, Larry Gordon at GandS, Steve McAnlis at Hobie and Mark Richards at Val Surf had a tremendous effect over what would appear in the mags. The content of the magazines largely reflected the viewpoint of the advertisers in them. No one I knew did aerobatic freestyle twirlies.

Well, yeah. We’re not going anywhere near that. So it had an impact on kids around the world.
It’s nice if people believe that.

Come on, you’ve got Henry Rollins and Ian MacKaye . . .
Yes, I am touched by that.

And the film is making this crazy impact at one of the biggest film festivals in the industry.
So they say.

Is it rewarding as an artist?
It’s pleasing to see people reflect on what occurred back then and have them now say they think it had value. That, for me, has meaning. The festival experience was confusing. The individuals who put on Sundance were very supportive and well intentioned. But there was this other crazy absurdist carnival that surrounded everything. I came out of a screening and there were several buck-naked females protesting against the use of fur. At the same moment across the street, there were a couple of working girls wearing nothing at all but ankle-length furs. I wondered where was the difference. Was it intent? Did one create bemusement for the press while the other provided amusement to her movie mogul clientele? All of the actresses were playing their parts.

But it had an impact and now it’s tweaking the film industry. You don’t feel great, like, “I got one over on them again”?
I think that 25-year-old content aces out today’s typical non-content. Everything is so politically correct and diluted that there is very little rational discourse any more.

How was it seeing the documentary win all the awards?
It was really bright on stage, you needed sunglasses.