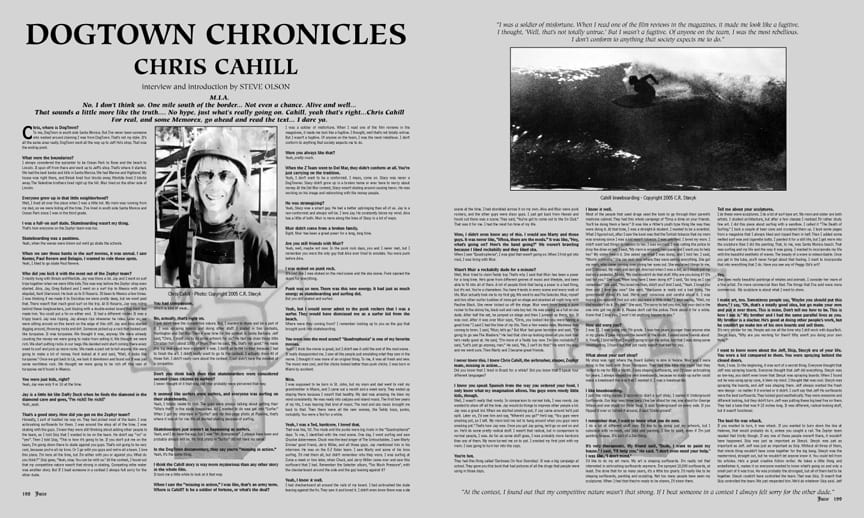 Welcome to our series of articles about the Zephyr competition team and the “DogTown and Z-Boys” documentary. The first series of the DogTown Chronicles began in issue 52 featuring interviews with the original Zephyr shop owners, Jeff Ho, Craig Stecyk III and Skip Engblom. In issue 53, Juice talked to Zephyr team riders Stacy Peralta and Bob Biniak. Issue 54 featured Z-Girl Peggy Oki and Z-Boys – Wentzle Ruml IV and Jay Adams. Issue 55, Juice Magazine talked with Zephyr team riders Paul Constantineau, Tony Alva and Shogo Kubo, as well as DogTown documentarian Glen E. Friedman. Issue 56, Nathan Pratt tells his side of the Dogtown story. Issue 57, Allen Sarlo gives his perspective on the documentary and the classic style of The Z-Boys – the ultimate instigators of aggressive surfing and skating. In issue 58, Olson tracked down the MIA Chris Cahill for a very interesting talk with the only Z-Boy not included in the documentary. This series of articles has generated plenty of controversy and proves, in fact, that history does repeat itself…

M.I.A. No, I don’t think so. One mile south of the border… Not even a chance. Alive and well… That sounds a little more like the truth…. No hype, just what’s really going on. Cahill, yeah that’s right…Chris Cahill. For real, and some Memorex, go ahead and read the text… I dare ya.

“I WAS A SOLDIER OF MISFORTUNE. WHEN I READ ONE OF THE FILM REVIEWS IN THE MAGAZINES, IT MADE ME LOOK LIKE A FUGITIVE. I THOUGHT, “WELL, THAT’S NOT TOTALLY UNTRUE. BUT I WASN’T A FUGITIVE. OF ANYONE ON THE TEAM, I WAS THE  MOST REBELLIOUS. I DON’T CONFORM TO ANYTHING THAT SOCIETY EXPECTS ME TO DO.”

Chris, where is DogTown?
To me, DogTown is south side Santa Monica. But I’ve never been someone who walked around claiming I was from DogTown. That’s not my style. It’s all the same area really. DogTown went all the way up to Jeff Ho’s shop. That was the ending point.

What were the boundaries?
I always considered the epicenter to be Ocean Park to Rose and the beach to Lincoln. It spun off from there and went up to Jeff’s shop. That’s where it started. We had the best banks and hills in Santa Monica. We had Marine and Highland. My house was right there, and Biniak lived four blocks away. Wentzle lived 2 blocks away. The Valentine brothers lived right up the hill. Muir lived on the other side of Lincoln.

Everyone grew up in that little neighborhood?
Well, I lived all over the place when I was a little kid. My mom was running from my dad, so we were hiding all the time. I’ve lived in south side Santa Monica and Ocean Park since I was in the third grade.

I was a full-on surf dude. Skateboarding wasn’t my thing.
That’s how everyone on the Zephyr team was too.

Skateboarding was a pastime.
Yeah, when the waves were blown out we’d go skate the schools.

When we saw those banks in the surf movies, it was unreal. I saw Kenter, Paul Revere and Belagio. I wanted to ride those spots.
Yeah, I liked to go skate Paul Revere.

Who did you kick it with the most out of the Zephyr team?
I mostly hung with Biniak and Wentzle. Jay was there a lot. Jay and I went on surf trips together when we were little kids. This was way before the Zephyr shop even started. Alva, Jay, Greg Bullard and I went on a surf trip to Mexico with Jay’s stepdad, Kent Sherwood. He took us to El Rosario. I’d been to Mexico a few times. I was thinking if we made it to Encinitas we were pretty deep, but we went past that. There wasn’t that much good surf on the trip. At El Rosario, Jay was riding behind these longboarders, just blazing with a double-ended board that Kent had made him. You could put a fin on either end. It had a different rocker. It was a trippy board. Jay was ripping. Jay always rips whenever he rides. Later on, we were sitting around on this bench on the edge of this cliff. Jay and Alva started digging around, throwing rocks and dirt. Someone picked up a rock that looked just like turquoise. It was turquoise. We thought it was, anyway. We were already counting the money we were going to make from selling it. We thought we were rich. We start putting rocks in our bags. We decided we’d start coming there every week to surf and pick up more rocks. We made a pact not to tell anyone. We were going to make a lot of money. Kent looked at it and said, “Well, it looks like turquoise.” Once we got back to LA, we took it downtown and found out it was just some worthless rock. We thought we were going to be rich off this vein of turquoise we’d found in Mexico.

Jay is a little bit like Daffy Duck when he finds the diamond in the diamond cave and goes, “I’m rich!! I’m rich!!”
Yeah, yeah.

That’s a good story. How did you get on the Zephyr team?
Honestly, I sort of hustled my way on. They had picked most of the team. I was airbrushing surfboards for them. I was around the shop all of the time. I was skating with the guys. I knew they were still thinking about adding other people to the team, so I told Skip that I wanted to be on the team. He didn’t say “no” or “yes”. Then I told Skip, “This is how it’s going to be. If you don’t put me on the team, I’m going down there to skate against you guys. That’s not going to be very cool, because you’re all my bros. Or I go with you guys and we’re all a team. I love this place. I’m here all the time, but I’m either with you or against you. What do you think?” Skip goes, “Yeah, okay. You can be with us.” At the contest, I found out that my competitive nature wasn’t that strong in skating. Competing in the water was another story. But If I beat someone in a contest I always felt sorry for the other dude.

You had compassion.
Which is kind of weak…

No, actually, that’s right on.
I just didn’t have the competitive nature. But, I wanted to skate and be a part of it. I was spraying boards and doing other stuff. I skated in two contests, Huntington and Del Mar. Then it was time for the contest in Santa Barbara. Jeff said, “Chris, I want you to do some artwork for us.” He had me draw these little Christian fish – about 1,000 of them. Then he said, “No, that’s not good.” He made this big deal about how important it was. I didn’t go to the contest because I had to finish the art. I didn’t really want to go to the contest. I actually drew 40 of those fish. I didn’t really care about the contest. I just didn’t have the mindset of a competitor.

Don’t you think back then that skateboarders were considered second-class citizens to surfers?
I never thought of it that way, but they probably were perceived that way.

It seemed like surfers were surfers, and everyone was surfing on their skateboards.
Yeah, I totally relate to that. The guys were always talking about getting their “Who’s Hot?” in the skate magazines. All I wanted to do was get into “Surfer.” When I got my interview in “Surfer” and my two-page photo at Pipeline, that’s where it was at for me. We all started skating because of surfing.

Skateboarders just weren’t as happening as surfers.
Yeah, and I do have the ego, but I was “Mr. Anonymous”. I always have been and probably always will be. My first photo in “Surfer” did not have my name.

In the DogTown documentary, they say you’re “missing in action.”
Yeah, it’s the same thing.

I think the Cahill story is way more mysterious than any other story in the whole film.
It took me a little while to look at it that way.

When I saw the “missing in action,” I was like, that’s an army term. Where is Cahill? Is he a soldier of fortune, or what’s the deal?
I was a soldier of misfortune. When I read one of the film reviews in the magazines, it made me look like a fugitive. I thought, well that’s not totally untrue. But I wasn’t a fugitive. Of anyone on the team, I was the most rebellious. I don’t conform to anything that society expects me to do.

When the Z Team went to Del Mar, they didn’t conform at all. You’re just carrying on the tradition.
Yeah, I don’t want to be a conformist. I mean, come on. Stacy was never a DogTowner. Stacy didn’t grow up in a broken home or ever have to worry about money. At the Del Mar contest, Stacy wasn’t skating around causing havoc. He was working on his image and networking with the money people.

He was strategizing?
Yeah, Stacy was a smart guy. He had a better upbringing than all of us. Jay is a non-conformist and always will be. I love Jay. He constantly blows my mind. Alva has a little of both. Muir is more along the lines of Stacy in a lot of ways.

Muir didn’t come from a broken family.
Right. Muir has been a great poser for a long, long time.

Are you still friends with Muir?
Yeah, well, maybe not now. In the punk rock days, you and I never met, but I remember you were the only guy that Alva ever tried to emulate. You were punk before Alva.