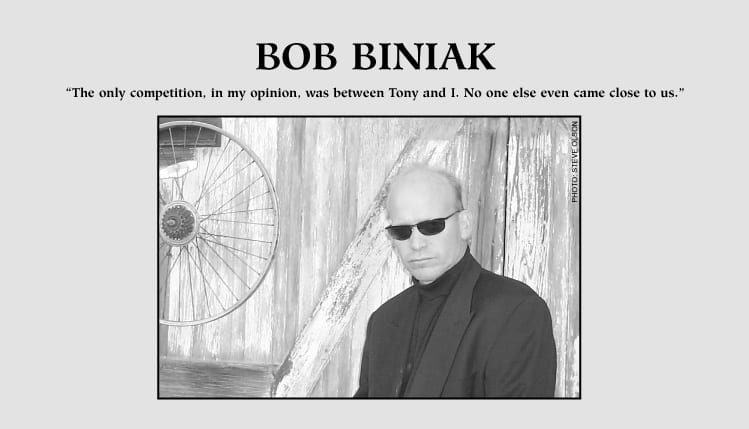 Welcome to our series of articles about the Zephyr competition team and the “DogTown and Z-Boys” documentary. The first series of the DogTown Chronicles began in issue 52 featuring interviews with the original Zephyr shop owners, Jeff Ho, Craig Stecyk III and Skip Engblom. In issue 53, Juice talked to Zephyr team riders Stacy Peralta and Bob Biniak. Issue 54 featured Z-Girl Peggy Oki and Z-Boys – Wentzle Ruml IV and Jay Adams. Issue 55, Juice Magazine talked with Zephyr team riders Paul Constantineau, Tony Alva and Shogo Kubo, as well as DogTown documentarian Glen E. Friedman. Issue 56, Nathan Pratt tells his side of the Dogtown story. Issue 57, Allen Sarlo gives his perspective on the documentary and the classic style of The Z-Boys – the ultimate instigators of aggressive surfing and skating. In issue 58, Zephyr team rider Chris Cahill talks about why he was left out of the movie completely. This series of articles has generated plenty of controversy and proves, in fact, that history does repeat itself…

How do you feel about the Dogtown and Z-Boys Documentary?
I think it was a great film. I think there were some inaccuracies; I think I deserved more and I don’t care what anyone thinks. They didn’t have one picture of me in a pipe and none of my downhill stuff. But I can live with that, it’s no big deal. You’ve got to understand, they have to make a movie and they can’t put everything in there. I think the way it was put together was great. It’s like re-living your childhood. It really showed where hard core skateboarding originated. Nobody could ride the radical terrain in those days like we did.

How was the Sundance experience?
Sundance was unreal. To see all these people I hadn’t seen in 20 years and hang out, talk smack, and tell stories. And obviously Tony [Alva] wanted to command every room he walked into so I was making jokes. “Give him three minutes, he’ll take over the conversation.” But that’s Tony. I had so much fun seeing all the boys. Then I was blown away by the buzz about the film. We were doing photo shoots and signing autographs. We were walking down the streets of Park City and people are going, “There’s the Z Boys from the Dogtown movie – that’s Biniak and Alva.” People were flashing pictures and the Dogtown party was the buzz of the whole city. And I’m so stoked for Stacy for getting the Best Director Award. He put a lot of work into this thing. I’ve got to hand it to him for getting all of us assholes together. That was a feat in itself. You’re talking about twelve egos that can’t fit through the door.

“THE ONLY COMPETITION, IN MY OPINION, WAS BETWEEN TONY AND I. NO ONE ELSE CAME CLOSE TO ME.”

Was it trippy that you guys were the buzz?
It was kind of weird. I used to walk around in my sunglasses with my board and not even notice it, but at Sundance, they told me to take my sunglasses off and they were trying to put make up on me. I told them I wasn’t taking my sunglasses off. But, I’m glad they made the film and told the story of that era. Beyond the Zephyr team, more talent came out of the Venice, Santa Monica, Malibu and Palisades area than did anywhere in the world.

What about Jeff Ho?
If it weren’t for Jeff Ho, this documentary would be nothing. Without Ho Surfboards, Zephyr Productions or his surf shop there would have been no Zephyr surf team let alone a Zephyr skateboard team. C.R. Stecyk and Skip Engblom were his partners, but without Jeff Ho, the Z Boys would have never been together. He helped me get where I am in life today and he deserves the credit for putting this whole piece of history together, more than anyone.

Do you think that you’re going to capitalize this time around?
I know I am. It’s already in the works. With one of my boards going for $3500 on Ebay, someone wants my boards. I’m making some limited edition collector’s edition in a frame, numbered, with a certificate of authenticity along with an autographed photo. Once the film is released, I’m going to put out some functional boards. I’m going to put up my own money to do it so no one is going to rip me off. I got ripped off plenty in the past.

Are you still pissed about that?
At the time I wasn’t pissed, but later on I was a little pissed. But it was 25 years ago and if you hold grudges that long, you’re an idiot. I’m a businessman now and I make a great living. If this documentary never came around, I wouldn’t be eating out of the gutter, but since it did come around, I’ll take advantage of it.

Why do you think it’s taken so long to tell this story?
Well, it’s a 30-year story. You have to see what we did and where we are now.

I read this e-mail about your Dogtown board selling on Ebay for $3,500, where this art director of one of the new skate companies said he hoped skateboarding wasn’t going in that direction when boards are selling for that much money.
Whoever said that is a kook and has no respect for where it came from. That board is not a board to ride; it’s a piece of the past.

Do you think they’re going to pull that off?
It’s going to be two or three years down the road. And Dogtown and The Z-Boys Documentary won’t be released until next summer.

I thought it was going to be this summer.
No, because Sony is going to distribute it. They want to send it to more film festivals all over the country and they want to get more hype and distribute it properly. We’re going to have to go to all these premieres. It’ll only create more hype. And I almost didn’t do it, I was telling them to “Fuck off.” They were pissed at me, too.

Yeah, they called me and said, “Biniak is not cooperating.” And I said, “He’ll cooperate, just offer him some money.”
Yeah, I didn’t even want any money, I just wanted a piece on the end. I said, “If it’s not going to make any money, put it on paper I’ll get a piece on the end.” If it doesn’t make money, that piece of paper means nothing. Have they sold the documentary?
They sold it to Sony Classics.

But what about the feature film?
It’s been taken over by New Line Cinema. But it’s not gonna happen for a couple of years. I know one thing; I haven’t been approached about it. And if they do a feature film and I’m not a part of it, it’s not a real feature about Dogtown.

Do you think they’ll tell the real side of what Dogtown really was?
If they don’t have my life story, they’re not going to hear the real deal. Flat out.

And what if they were to candy-coat it to make it more accessible to the general public?
Candy-coating this story would only ruin it. To tell this story, you better tell it real, because it is what it is and if you don’t tell it real, than it’s a joke.

Do you think Peralta can tell it?
I think he can and he’s approached me and asked me and told me that people want to know the real deal, but I haven’t been offered a dime.

How do you feel about this dude writing the story with his opinion and his point of view and getting paid and all the other players not getting paid?
Well, I think it should be a collaboration of everybody because I believe that Stacy can write, but I don’t know that he’s going to tell the real deal. And that’s why he keeps coming to everyone and asking for the real deal. If he wants to ask for the real deal then put the paper on the table.

The Dogtown documentary seemed to favor Tony, Jay and Stacy in comparison to the unity of the whole gang.
And I think that was fuckin’ wrong. And that’s one of the most inaccurate parts of the whole deal. Because, I don’t care what anyone thinks, Stacy was on the outside, he wasn’t one of the boys. And he made this film and he did a great job. But when you talk Dogtown, there were two cats that led the pack. It was Tony and Biniak. If it weren’t for Tony and me, then Stacy wouldn’t even have been part of it. And there were a lot of other guys involved. We need to add everyone into that thing; all the guys that were part of the party. It isn’t the Stacy, Tony, and Jay party. It was all of us.