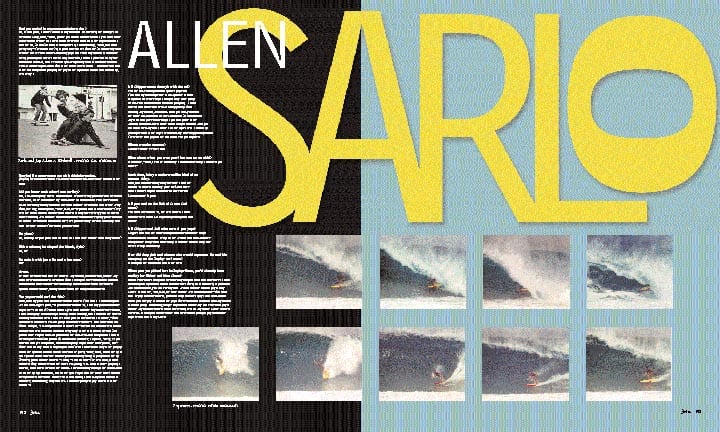 At age 5, Allen Sarlo began surfing. At 13, he began working with a local board shaper and nonconformist named Jeff Ho. At 14, he earned passage into POP territory. Two years later, he won the 4A division in Malibu and scored a photo in Surfer magazine. Sarlo is one-of-a-kind – a bonafide superstar and big wave charger. Though Sarlo insists he was more of a skate fan than an originator, his aggression and style transformed the sport.

How did you get into the whole lifestyle of surfing and skating?
My dad was a lifeguard, so my older brother Mike and I grew up underneath the lifeguard tower at Venice Breakwater.

When did you actually start surfing?
I started rubber-matting and surfing Styrofoam surfboards when I was 5 years old. We rented those blue rubber mats on Bay Street in Santa Monica. We belly rode first and then started standing up. When I stood up on the Styrofoam surfboards, they broke. I ended up breaking two or three of them. Then my older brother started surfing, so I started surfing when I was eight years old.

Did you surf totally on longboards?
Yeah, my first surfboard was an 8’6 Shell Stingray surfboard. Shell was interesting because they sold car parts and surfboards.

What a combination . . .
Yeah, it was cool. It was on Second and Broadway in Santa Monica. They had an auto-parts dealership and they did car repairs, but the guy, Shell, was also a surfer and he built surfboards. You could go in there, buy carburetors and transmissions, and order a surfboard. The classic thing about it was that I was this little kid with my 8’6 and it was the shortest board on the beach. Everybody was riding 9’5s and 10-footers. Instantly, all of the hot kids wanted to borrow my board because it was the smallest board on the beach.

Did you skateboard when the first wave of skating came in?
We skateboarded with steel wheels. I was talking to Darrick Doerner the other day because he had watched the DogTown documentary. Darrick lived in Venice and he moved away before the Jeff Ho shop opened. Darrick and I were really good friends – then and now. We both went to Mark Twain Junior High School. Darrick said, “Remember when we cut the tail off skis? We put wheels on the bottom of the ski because the ski looked like a surfboard.” Before we made oak skateboards, we just cut up our snow skis. The ski had a kick and we were skating around like we were surfing.

You were more focused on surfing, right?
Definitely. When I was a kid, I went to Malibu before we surfed POP (Pacific Ocean Park), and I saw Nat Young and Jay Riddle just destroying Malibu and I wanted to be just like them. Everybody on the beach was in awe. That was my introduction to short-board surfing.

Was Malibu in its heyday?
Oh, yes. This was in the Weber days. Jeff Ho worked for Weber. He was a glasser and a pin striper…

Weber was a little bit of a creative…
Yes, he was a creative guy. The Weber shops were on Lincoln and West Wind. Everybody rode a Weber.

Riddle was really young then, right?
Riddle was a hot kid and Nat was the old master, the super star, a champion. They were out there just trying to one-up one another.

Who do you think was and ‘King of Malibu’ in the early days?
It was definitely Dora. He was way better than anyone and he had more style. He was more creative. Then Jay [Riddle] came around. Jay was younger and had a beautiful style. Jay was the next king.

You went to Venice High and Mark Twain. Where did you go to middle school?
I went to Anchorage Elementary School and, later, to Santa Monica College. I played a few years of football there and finished at Pepperdine.

Surfing and football. If you’re pulling into a barrel, and it might not be make-able, it’s sort of like sticking some dude. You know you’re going to get hit. It’s like getting taken out by a big fat tackle or something . . .
Yes, for sure. When you surfed POP Pier, you had Wayne Inouye, Ronnie Jay, Jeff Ho, Craig Praycon and John Orlando all trying to get in your way. It was a full line-up. (laughs) You had to stake your ground and say, “This one is mine. Piss off!”