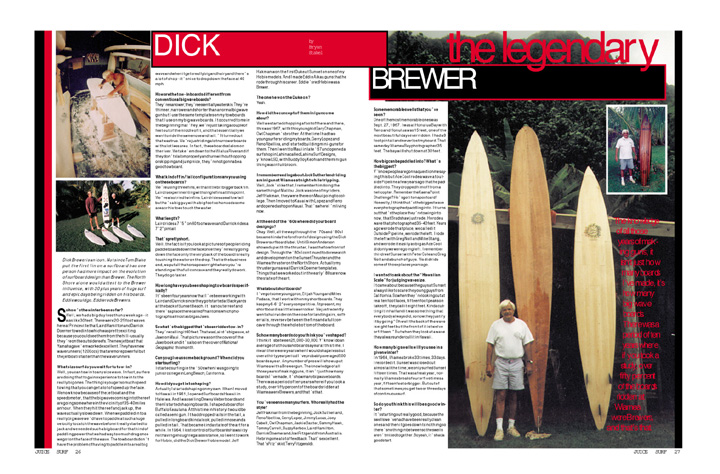 So how’s the winter been so far?
Well, we had a big day less than a week ago – it was like 30 feet. There were 20-25 foot waves here at Princeville that Laird Hamilton and Darrick Doerner towed into which was pretty exciting because you could see them from the hill – usually they’re on the outside reefs. The new jetboat that Yamaha gave ’em worked excellent. They have new waverunners (1200 ccs) that are more powerful but the jetboat is faster than the waverunners.

What size surf do you wait for to tow-in?
Well, you can tow in to any size wave. In fact, surfers are doing that to gain experience to tow in to the really big ones. The thing is you get so much speed towing that you can get a lot of speed up the face. We now know because of the jetboat and the speedometer, that the big waves coming into the reef are going somewhere in the vicinity of 35-40 miles an hour. When they hit the reef and jack up, the wave actually slows down. When we paddled in to a really big wave we’d have to paddle at such a huge velocity to catch the wave before it really started to jack and we needed such a big board for that kind of paddling power that we had way too much drag once we got on the face of the wave. The tow boards don’t have the problem of having to paddle into a real big wave and when it gets really big and hairy and there’s a lot of chop – it’s nice to drop down the face at 40 mph.

How are the tow-in boards different from conventional big wave boards?
They’re narrower; they’re essentially waterskis. They’re thinner, narrower and shorter than a normal big wave gun but I use the same templates on my tow boards that I use on my big wave boards. It occurred to me in the beginning that ‘Hey, we’re just taking a couple of feet out of the middle of it, and that essentially we want to ride the same nose and tail.’ It turned out that was true. We’re just riding a lot narrower boards with a lot less area. In fact, these boards slalom on the river. We take ’em down to the Wailua River and if they don’t slalom properly and turn without hopping or skipping and jump nice, they’re not gonna be a good tow board.

What kind of fin/tail configurations are you using on these boards?
We’re using three fins, with a little bit bigger back fin. Laird is experimenting with single fins at this point. We’ve also tried twin fins. Laird rides a swallow-tail but he’s a big guy with a big foot so he needs some area or his toes touch the water.

That’s pretty short.
Well, the fact is if you look at pictures of people riding paddle boards down the face once they’re really going down the face only the very back of the board is really touching the water on the drop. That is the business end, we put all the horsepower right where you’re standing with a full concave and they really do work. They do go faster.

How long have you been shaping tow boards specifically?
It’s been four years now that I’ve been working with Laird and Darrick since they got started at Backyards at the back of Sunset Beach. It’s an outer reef and there’s a place there called Phantoms which photographs almost as big as Jaws.

So what’s the biggest that’s been ridden tow-in?
They’re calling it 60 feet. That was Laird’s big wave, at Jaws on Maui. That picture was on the cover of the Jaws book and it’s also on the cover of National Geographic this month.

Can you give us some background? When did you start surfing?
I started surfing in the ’50s when I was going to junior college in Long Beach, California.

How did you get into shaping?
Actually I started shaping on my own. When I moved to Hawaii in 1961, I opened Surfboards Hawaii in Haleiwa. And I was selling Dewey Weber boards and then I started shaping boards. I shaped a board for Buffalo Keaulana. At this time in history it would be called a semi gun. It had dropped rails in the tail, a pulled in longboard kinda look; pulled in nose and a pulled in tail. That became kinda state of the art for a while. In 1964, I lost control of Surfboards Hawaii by not having enough legal assistance, so I went to work for Hobie, did the Dick Brewer Hobie model. Jeff Hakman won the first Duke at Sunset on one of my Hobie models. And I made Eddie Aikau guns that he rode through his career. Eddie’s red Hobie was a Brewer.

The one he won the Duke on?
Yeah.

How did the concept of the mini gun come about?
Well we started chopping a foot off here and there, this was 1967, with this young kid Gary Chapman, Owl Chapman’s brother. At the time I had two young surfers riding my boards, Gerry Lopez and Reno Abellira, and I started building mini-guns for them. Then I went to Maui in late ’67 and opened a surf shop in Lahina called Lahina Surf Designs, y’know LSD, with Buddy Boy Keohi and the mini gun thing was in full bloom.

I remember reading about Jock Sutherland riding a mini gun at Waimea at night while tripping.
Well, Jock’s like that, I remember him doing the same thing at Malibu. Jock was one of my riders, Jeff Hakman, they were there on Maui going to college. Then I moved to Kauai with Lopez and Reno and opened a shop on Kauai. That’s where I’m living now.

At the end of the ’60s where did your board design go?
Okay. Well, all the way through the ’70s and ’80s I became kinda the forefront of design using the Dick Brewer surfboard label. Until Simon Anderson showed up with the thruster, I was the forefront of design. Through the ’80s I continued to do research and development on the Sunset Thruster and the Waimea thruster on the North Shore. Actually my thruster guns are all Darrick Doerner templates. Things that we worked out in the early ’80s are now the state of the art.

What about shortboards?
I’ve got some young pros, Elijah Young and Miles Padaca, that I work with on my shortboards. They keep my 6-6’2”s very competitive. At present, my shortboard is a little lower rocker. We just recently went a hair wider on the nose for landing airs, softer rails, reverse v between the fins and a full concave through the whole bottom of the board.

So how many boards do you think you’ve shaped?
I think it’s between 25,000-30,000. Y’know I do an average of a thousand boards a year at this time. I mean there were years when I would shape less but over a thirty year period I’ve probably averaged 500 boards a year. Any number of pros will show up at Waimea with a Brewer gun. The knowledge of all those years of making guns, it isn’t just how many boards I’ve made, it’s how many big wave boards. There was a period of ten years where if you took a study, over fifty percent of the boards ridden at Waimea were Brewers, and that’s that.

Some memorable swells that you’ve seen?
One of the most memorable ones was Sept. 27, 1967. I was at Honolua Bay with Reno and Honolua was 15 feet, one of the most beautiful days ever ridden. I had a 9 foot pintail and never lost my board. That same day Waimea Bay photographed 35 feet. The bay will shut down at 30 feet.

How big can be paddled into? What’s the biggest?
Y’know people are gonna question me saying this but Ace Cool rode a wave at outside Pipeline a few years ago that he paddled into. They dropped him off from a helicopter. Remember the Kaena Point Challenge? He’s got it on a postcard! Honestly, I think that’s the biggest wave ever photographed paddling into. It turns out that’s the place they’re towing into now, that Bradshaw just rode. He rode a wave that photographed 35-40 feet. Years ago we rode that place, we called it Outside Pipeline, we rode the left. I rode the left with Greg Noll and Mike Stang, and we rode it easily as big as Ace Cool did only we were going left. I remember third reef Sunset with Peter Cole and Greg Noll and a bunch of guys. We did ride some of those places years ago.

I wanted to ask about the “Hawaiian Scale” for judging wave size.
It came about because the guys at Sunset always like to scare the young guys from California. So when they’re looking out at real ten foot faces, fifteen foot peaks on takeoff, they call it eight feet. Kinda cutting it in half and it was something that everybody always did, so now they justify it by going “Oh well the back of the wave is eight feet but the front of it is twelve or fifteen.” But when they look at a wave they always under call it in Hawaii.

How many big swells will you see in a given winter?
In 1964, Waimea broke 33 times, 33 days. I recorded it. Sunset was closed out almost all the time; we only surfed Sunset fifteen times. That was a freak year, normally Waimea breaks four or five times a year, fifteen feet or bigger. But out of that sometimes you get two or three days of continuous surf.

Do you think this will be a good winter?
It’s starting out really good, because the swells we’ve had have been really clean ones and then it goes down to nothing so there’s nothing in between so the swells aren’t mixed together. So yeah, it’s had a good start.

THIS STORY IS FROM JUICE MAGAZINE ISSUE #42

PrevPreviousFIVE AND ALIVE AT RIVERSIDE
NextJUICE MAGAZINE 44Next