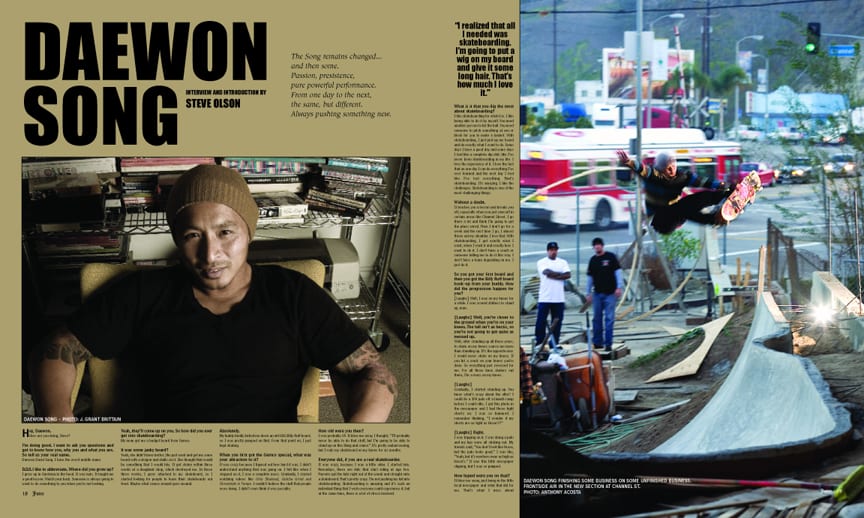 The Song remains changed… and then some. Passion, persistence, pure powerful performance. From one day to the next, the same, but different. Always pushing something new.

“I REALIZED THAT ALL I NEEDED WAS SKATEBOARDING. I’M GOING TO PUT A WIG ON MY BOARD AND GIVE IT SOME LONG HAIR. THAT’S HOW MUCH I LOVE IT.”

Hey, Daewon.
How are you doing, Steve?

I’m doing good. I want to ask you questions and get to know how you, why you and what you are. So tell us your real name.
Daewon David Song. I have the worst middle name.

D.D.S. I like to abbreviate. Where did you grow up?
I grew up in Gardenia in the hood. It was nuts. It taught me a good lesson. Watch your back. Someone is always going to want to do something to you when you’re not looking.

Yeah, they’ll come up on you. So how did you ever get into skateboarding?
My mom got me a budget board from Gemco.

It was some janky board?
Yeah, she didn’t know better. She just went and got me some board with a dragon and skulls on it. She thought that would be something that I would like. It got stolen within three weeks at a doughnut shop, which destroyed me. In those three weeks, I grew attached to my skateboard, so I started looking for people to leave their skateboards out front. Maybe what comes around goes around.

Absolutely.
My buddy finally kicked me down an old GandS Billy Ruff board, so I was pretty pumped on that. From that point on, I just kept skating.

When you first got the Gemco special, what was your attraction to it?
It was crazy because I figured out how hard it was. I didn’t understand anything that was going on. I felt like when I stepped on it, I was a complete mess. Gradually, I started watching videos like Ohio Skateout, Gotcha Grind and Streetstyle in Tempe. I couldn’t believe the stuff that people were doing. I didn’t even think it was possible.

How old were you then?
I was probably 14. It blew me away. I thought, “I’ll probably never be able to do that stuff, but I’m going to be able to stand up on this thing and cruise.” It’s pretty embarrassing, but I rode my skateboard on my knees for six months.

Everyone did, if you are a real skateboarder.
It was crazy, because I was a little older. I started late. Nowadays, there are kids that start riding at age two. Parents spit the kids right out of the womb and straight onto a skateboard. That’s pretty crazy. I’m not pushing my kid into skateboarding. Skateboarding is amazing and it’s such an individual thing that I wish everyone could experience it; but at the same time, there is a lot of stress involved.

What is it that you dig the most about skateboarding?
I like skateboarding for what it is. I like being able to do it by myself. You need another person to hit the ball. You need someone to pitch something at you or block for you to make a basket. With skateboarding, I just pick up my board and do exactly what I want to do. Some days I have a good day and some days I feel like a complete dip-shit; like I’ve never been skateboarding in my life. I love the experience of it. I love the fact that on one day I can do everything I’ve ever learned and the next day I feel like I’ve lost everything. That’s skateboarding. It’s amazing. I like the challenges. Skateboarding is one of the most challenging things.

Without a doubt.
It teaches you a lesson and breaks you off, especially when you put yourself in certain areas like Channel Street. I go there a lot and think I’m going to get the place wired. Then I don’t go for a week and the next time I go, I almost throw out my shoulder. I love that. With skateboarding, I get exactly what I want, when I want it and exactly how I want to do it. I don’t have a coach or someone telling me to do it this way. I don’t have a team depending on me. I just do it.

So you got your first board and then you got the Billy Ruff board hook-up from your buddy. How did the progression happen for you?
[Laughs] Well, I was on my knees for a while. I was scared shitless to stand up, man.

[Laughs] Well, you’re closer to the ground when you’re on your knees. The fall isn’t as hectic, so you’re not going to get quite as messed up.
Well, after standing up all these years, to skate on my knees scares me more than standing up. It’s the opposite now. I would never skate on my knees. If you hit a crack on your knees you’re done. So everything just reversed for me. For all those knee skaters out there, I’m a wuss on my knees.

[Laughs]
Gradually, I started standing up. You know what’s crazy about the ollie? I could do a 360 judo off a launch ramp before I could ollie. I got this photo in the newspaper and I had these tight shorts on. I was so bummed. I remember thinking, “I wonder if my shorts are as tight as Hosoi’s?”

[Laughs] Right.
I was tripping on it. I was doing a judo and my lips were all sticking out. My friends said, “You don’t look like Hosoi, but the judo looks good.” I was like, “Yeah, but it’s nowhere near as high as Hosoi’s.” It was this little newspaper clipping, but I was so pumped.