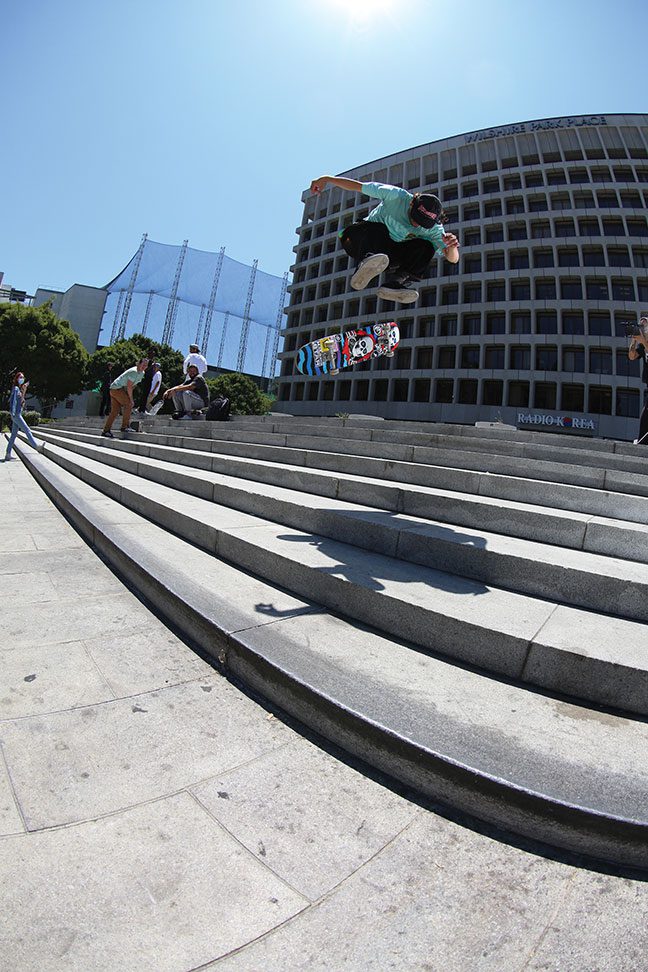 It’s a dream come true. I used to skate C.A.S.L. competitions and I’d always win the Powell Games of S.K.A.T.E. and best tricks and I’d always win Powell decks and I’d be skating them month by month. Deville was at one of the contests and he gave me a board and I went to skate with him the next day and here I am now. It’s pretty crazy.

What are some of your favorite things about skateboarding?

It’s the freedom. There are no rules to it at all. You can do anything you want, any trick you want, no matter how hard it is or how easy it is. You can express the way you skate.

I come from Bell Gardens, California.

What is your favorite band to listen to?

I love System of A Down, Misfits, Sublime, Arctic Monkeys, Joy Division, the Doors, Led Zeppelin, the Beatles, Jimi Hendrix… I could keep going.

That’s a good variety. What has been the best skate session you ever had?

Gnar. Were your aspirations in life to become a professional skateboarder?

I’ve always thought about skateboarding ever since I was little. They were like, “What do you want to do when you grow up?” I would write, “Professional skateboarder.” It’s crazy. I’m trying to pursue it at its fullest potential now and I just turned amateur this year and got a photo in Thrasher by Deville, so I’m very grateful.

Rad! Was that your first photo in a mag?

Yeah. That was my first photo ever.

It was so surreal. I couldn’t process it for a while, even to be amateur. I was like, “I’m actually doing this.” My parents liked it, but my father thought of it more like a hobby. He was like, “You need to get a job and go to college.” Then he saw that I got that photo in a magazine and I’ve been getting all of these boxes of product and he can’t believe it.

“It’s the freedom. There are no rules to it at all. You can do anything you want, any trick you want, no matter how hard it is or how easy it is. You can express the way you skate.”

It’s such a trip. I think about it a lot when I’m just chilling. On the nights I can’t sleep, I’m thinking, “Damn!” I’m really grateful for everyone.

That’s a good list. If you could have one super power, what would it be?

I don’t know. I could be hiding in the corner and not be seen. I’d be all low-key and stealth.

That could put you in some interesting situations. What do you think your biggest challenge in life is?

Just enjoying life is the biggest challenge every day.

Why is that challenging for you?

I think that lends itself to what you were saying about skateboarding and freedom.

Yeah. It brings so much freedom to everybody. I love seeing everyone skate, from skating curbs to skating pools and pyramids and ramps and rails, and the variety of tricks. I love the whole aspect of skateboarding. It makes me happy.

Was Powell your first legit sponsor?

Yeah. I was sponsored by a little board company in Inglewood called Barely Legal Skateboards and I jumped off straight to Powell, gratefully.

What other sponsors do you have?

That’s tight. What do you want your legacy to be?

I want to be known as the happiest dude.

That’s a really good legacy to have.

Yeah. I want people to think, “Cole is always happy, always with a smile and never negative.”

What is the one thing that you’ve laid down on your skateboard that you’re most proud of?

It was probably disco heeling the Rose Garden set and double flipping the Hollywood 12, paying        homage to Billy Marks.

You double flipped that? That’s gnarly.

Wow. Is Billy Marks your favorite?

Yeah. I like Billy Marks and Tom Penny. I get a lot of inspiration by them, and Jamie Thomas, Chris Joslin, Ocean Howell, Tosh Townend and Bobby Puleo.

Moon boots and no movement on the 5-0.

Yeah. His Photosynthesis, and Jason Dill and AVE have been a big inspiration on me, and Andrew Reynolds for sure. I love jumping off stairs.

Sick! If you were asked to describe your style, how would you describe it?

Those are big shoes.

[Laughs] Yes! Give some shout outs.

Thank you and thank you Juice Mag.