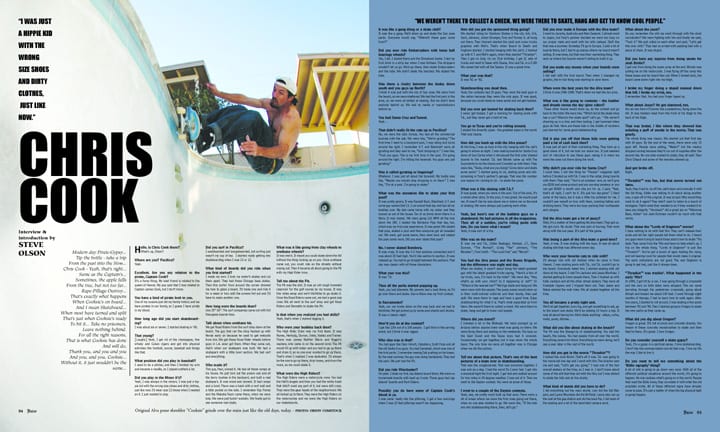 Modern day Pirate-Gypsy… Tip the bottle – take a trip from the past into the now… Chris Cook – Yeah, that’s right… Same as the Captain’s… Sometimes, the apple falls  from the tree, but not too far… Rape-Pillage-Destroy… That’s exactly what happens when Cooksie’s on board… And I mean Skateboard… When most have turned and split that’s just when Cooksie’s ready to hit it… Take no prisoners. Leave nothing behind. For all the right reasons,  that is what Cooksie has done and will do. Thank you, and you and you, and you, and you, Cooksie… Without it, it just wouldn’t be the same…

Hello. Is Chris Cook there?
What’s up, Olson?

Where are you? Pacifica?
Yeah.

Excellent. Are you any relation to the pirate, Captain Cook?
It’s a funny thing. My best friend is related to the queen of Hawaii. My pop said that I was related to Captain James Cook, but I don’t know.

You have a kind of pirate look to you.
One of my cousins just did my family history and we have pirates in our family, so I guess I have pirate in my blood.

How long ago did you start skateboarding?
I was about six or seven. I started skating in ’68.

That young?
[Laughs] Yeah, I got rid of the champagne, fine whisky and Cuban cigars and got into physical activities like football, soccer, baseball and things like that.

What position did you play in baseball?
I used to be a pitcher, and then I twisted my arm and became a noodle, so I played outfield a lot.

Did you play in the Minor A’s?
Yeah, I was always in the minors. I was just a hippie kid with the wrong size shoes and dirty clothes, just like now. I’d wear size 12 shoes when I needed an 8. I just wanted to play.

Did you surf in Pacifica?
I sandboarded and boogieboarded, but surfing just wasn’t my cup of tea. I started really getting into skateboarding when I was 12 or 13.

What kind of boards did you ride when you first started?
I made my own. I took my sister’s skates and cut them apart. They had those Chicago base plates. Then this surfer from around the corner showed me how to glass a board. I’d make one and ride it for a week or two until the screws fell out and I’d have to make another one.

How long were the boards then?
Like 25”-26”. The surf companies came out with full fiberglass boards then.

Talk about when urethane hit.
We got Road Riders from this surf shop down at the beach. The guy that ran the shop hooked up with Novak early on because he used to get wetsuits from him. We got those Road Rider wheels before guys in L.A. even got them. When they came out, that’s when our skatepark was built. We had a skatepark with a little bowl section. We had vert and everything.

Who made it?
This guy, Paul, owned it. He had all these ramps at his house. He just tore out the poison oak and all the berry bushes in the backyard, and built a real skatepark. It was wood and cement. It had ramps and a bowl. There was a bank with a vert wall and a little pocket on the side. I remember Ray Flores and the Makaha Team came there, when we were kids. We were just ecstatic. We finally got to see someone real skate.

What was it like going from clay wheels to urethane wheels?
It was weird. It meant you could skate down the hill without the thing locking up on you. Once urethane came out, you could ride on the streets without wiping out. Then it became all about going to the Pit with my High Rider bros.

Tell me about the Pit.
The Pit was the shit. It was an old rough troweled reservoir for the golf course by my house. It was five miles away and we’d hitchhike to go skate it. Once the Road Riders came out, we had a good size crew. We all went to the surf shop and got Road Riders and Bennetts to skate the Pit.

Is that when you realized you had skills?
Yeah, that’s when I started digging it.

Who were your buddies back then?
The High Rider Crew was my first team. It was Nunes, Hertszig, Durran, Oster, Valdez and Trainer. There was James Muffler Mario and Riggin’s nephew, who came in on the second wind. The Pit would fill up with water and you had to go up there and drain it, so no one ever wanted to go up there. That’s when I realized I was dedicated. I’d always be the one to go up there, drop hoses, and drain the muck, so we could skate it.

Did you ever ride Embarcadero with loose ball bearings wheels?
Yes, I did. I skated there and the Chinatown banks. I had my first drink in a strip bar when I was thirteen. The strippers wouldn’t let us go. We’d go there, then skate Embarcadero and the tube. We didn’t skate the benches. We skated the tube.

Was there a rivalry between the dudes down south and you guys up North?
I think it was just with the city of San Jose. We were from the beach, so we were sheltered. We had the first park in the area, so we were all skilled at skating. But we didn’t have anybody behind us. We had no media or manufacturers behind us.

You had Santa Cruz and Tunnel.
Yeah…

That didn’t really fit the cats up in Pacifica?
No, we were the dark horses. You had all the commercial bunnies with the ads. We were like, “We’re grinding.” The first time I went to a backyard pool, I was doing kick turns around the light. I remember K.T. and Blackhart were all gyrating and they said to me, “Quit dropping in.” I was like, “Fuck you guys. This is my first time in the pool. I’m going around the light. I’m hitting the facewall. You guys are just gyrating.”

Was it called gyrating or lingering?
Whatever. I was just all about the facewall. My buddy was like, “Maybe you should stop dropping in on them.” I was like, “I’m at a pool. I’m going to skate.”