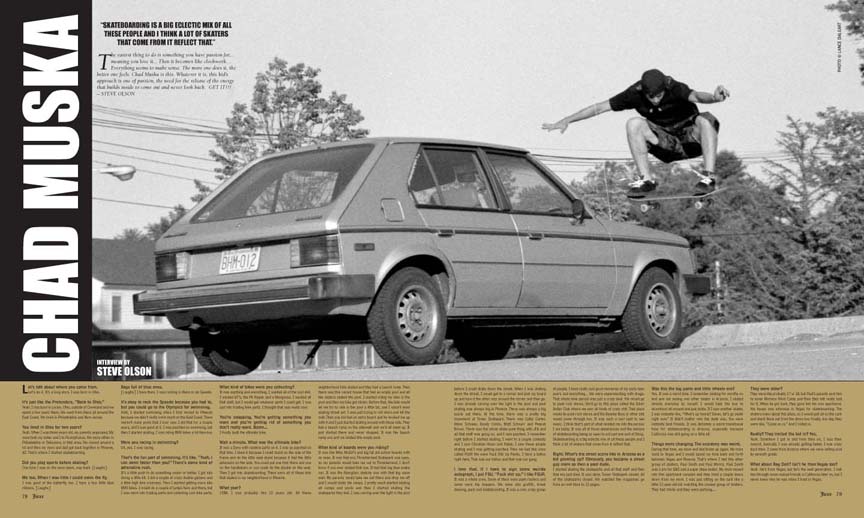 The easiest thing to do is something you have passion for…. meaning you love it… Then it becomes like clockwork…. Everything seems to make sense. The more one does it, the better one feels. Chad Muska is this. Whatever it is, this kid’s approach is one of passion, the need for the release of the energy that builds inside to come out and never look back.  GET IT!!! – STEVE OLSON

“I just loved going to the skate spot and bringing the radio and hyping up the crowd. There was always music, and I had a posse, so there was an entourage always following me around. We always had a crew and it was always like something was going on.”

Let’s talk about where you came from.
Let’s do it. It’s a long story. I was born in Ohio.

It’s just like the Pretenders, “Back to Ohio.”
Yeah. I was born in Lorain, Ohio, outside of Cleveland and we spent a few years there. We went from there all around the East Coast. We lived in Philadelphia and New Jersey.

You lived in Ohio for two years?
Yeah. When I was three years old, my parents separated. My mom took my sister and I to Pennsylvania. We were either in Philadelphia or Delaware, in that area. We moved around a lot and then my mom and dad got back together in Phoenix, AZ. That’s where I started skateboarding.

Did you play sports before skating?
One time I was on the swim team, way back. [Laughs]

Me too. When I was little I could swim the fly.
I was good at the butterfly, too. I have a few little blue ribbons. [Laughs]

Bags full of blue ones.
[Laughs] I have them. I was rocking in there in my Speedo.

It’s okay to rock the Speedo because you had to, but you could go to the Olympics for swimming.
Well, I started swimming when I first moved to Phoenix because we didn’t really swim much on the East Coast. There weren’t many pools that I ever saw. I did that for a couple years, and I was good at it. I was psyched on swimming, but then I started skating. I was riding BMX bikes a lot then too.

Were you racing in swimming?
Oh, yes. I was racing.

That’s the fun part of swimming. It’s like, “Yeah. I can swim faster than you!” There’s some kind of adrenaline rush.
It’s a little push to do something cooler or better. I got into diving a little bit. I did a couple of crazy double gainers and a little high dive craziness. Then I started getting more into BMX bikes. I would do a couple of jumps here and there, but I was more into trading parts and collecting cool bike parts.

What kind of bikes were you collecting?
It was anything and everything. I wanted all of the cool shit. I wanted GT’s, the PK Ripper and a Mongoose. I wanted all that stuff, but I would get whatever parts I could get. I was just into trading bike parts. I thought that was really cool.

Wait a minute. What was the ultimate bike?
It was a Dyno with random parts on it. I was so psyched on that bike. I liked it because I could stand on the side of the frame and do the little seat stand because it had the little extension on the side. You could put one foot there and one on the handlebars or you could do the double on the seat. Then I got into skateboarding. There were all of these kids that skated in my neighborhood in Phoenix.

What year?
1988. I was probably like 10 years old. All these neighborhood kids skated and they had a launch ramp. Then there was this vacant house that had an empty pool and all the skaters skated the pool. I started riding my bike in the pool and then my bike got stolen. Before that, the kids would let me try to ride in the pool a little bit, and I wasn’t even skating street yet. I was just trying to roll down and hit the wall. Then one kid had an extra board and he hooked me up with it and I just started skating around with these kids. They had a launch ramp on the sidewalk and we’d all meet up. It just started there and never stopped. It was the launch ramp era and we skated this empty pool.