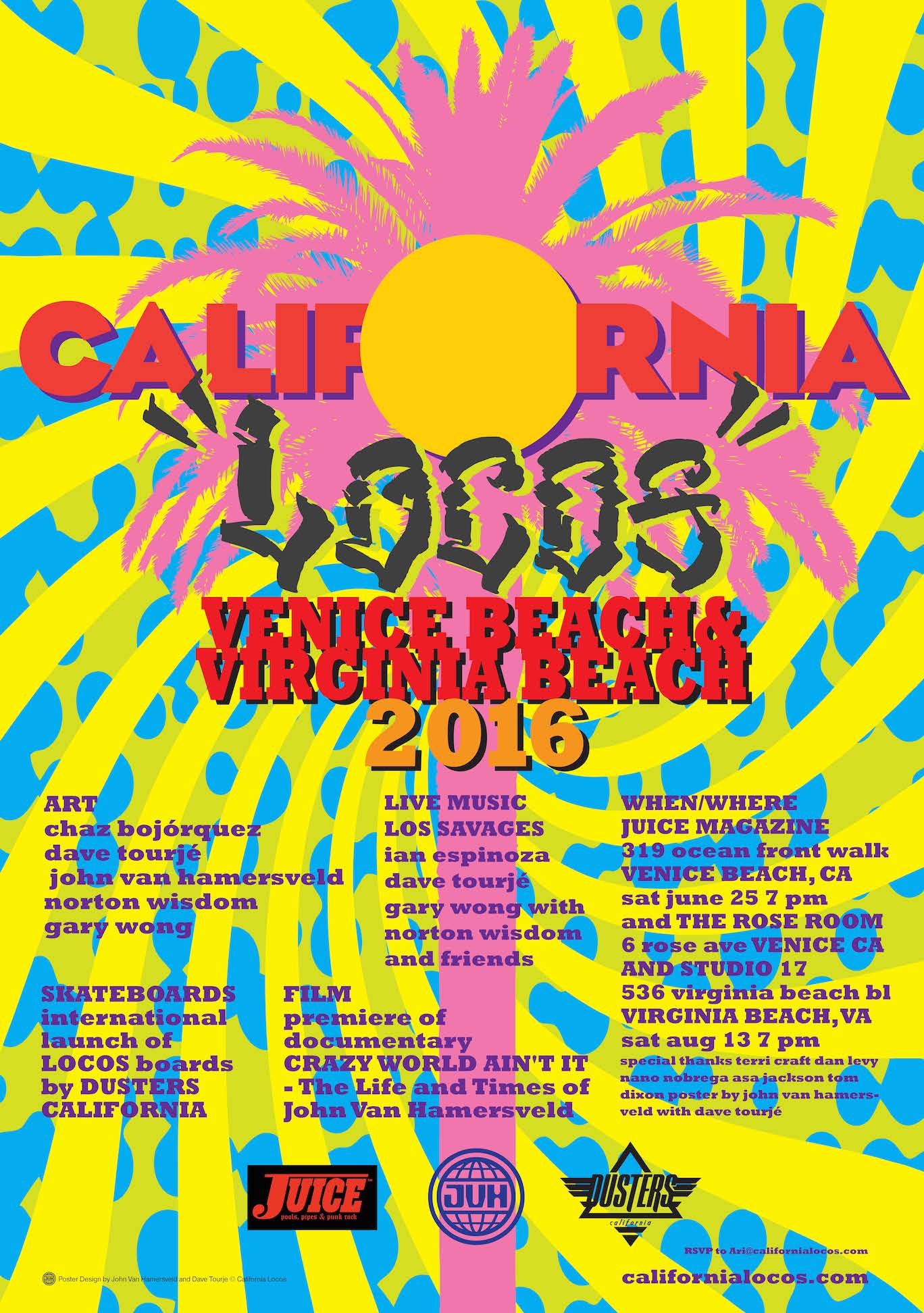 Chaz Bojórquez, Dave Tourjé, John Van Hamersveld, Norton Wisdom, and Gary Wong—the CALIFORNIA LOCOS—represent 50 years of Los Angeles art, each having been influenced and inspired by the surf, skate, music and barrio culture, as well as formal art practice, that has combined and morphed in Los Angeles from the ’60s through today. The art they innovated—combining Graffiti, Surf/Skate, Pop Art and Punk—has gone global, and now the CALIFORNIA LOCOS boldly confront and challenge their progeny with original verve and style in this new show which explores both the sun and the shadows of Southern California.

The CALIFORNIA LOCOS—five pioneering Los Angeles artists whose roots are in graffiti, surf, skate, punk rock, as well as the contemporary artworld—bring their edgy, sun-soaked styles to an even larger audience with new works for a pair of week-long bicoastal summer shows, while launching the CALIFORNIA LOCOS skateboards by DUSTERS CALIFORNIA, led by creative director Nano Nobrega and premiering highlights from the documentary Crazy World Ain’t It—The Life and Times of John Van Hamersveld. In addition, a new collaborative poster design by John Van Hamersveld and Dave Tourjé will be released.

For the bicoastal shows—independent, DIY events sponsored by JUICE MAGAZINE that stay true to the CALIFORNIA LOCOS’ aesthetic of bucking the status quo—expect new works that explore the dichotomies of SoCal, plus an exhibition of the exclusive skateboard collaboration with the CALIFORNIA LOCOS and DUSTERS CALIFORNIA, as well as live music from eclectic blues provocateurs, LOS SAVAGES, featuring Ian Espinoza, Dave Tourjé, and Gary Wong with Norton Wisdom. Maverick artist/musician and American treasure, Llyn Foulkes, will also be joining the Los Savages jam session. SALBA (Steve Alba), legendary skateboarder, godfather of pool skating, guitarist and Skateboarding Hall of Famer will open the night’s musical festivities featuring a set with a special all-star group, Salba & His Heavy Friends. This is a show not to be missed.

Art critic, Shana Nys Dambrot, writes about the CALIFORNIA LOCOS in the Huffington Post  “What they did changed everything — but what they are doing now is the best work of their lives.”

Former curator of the contemporary collection of the Norton Simon Museum, Michelle Deziel, describes the CALIFORNIA LOCOS, “These native Angelenos grew up independently in all corners of this expansive city immersed in the myriad of colorful and intense L.A. subcultures—gangs, hot rod, surf, graffiti, skate, funk, punk and rock. Rather than suggesting a cohesive or coinable L.A. aesthetic, California Locos presents a collision of visions—a kaleidoscopic perspective of the urban art experience as seen and interpreted by L.A. insiders through highly individualized and expertly crafted works of art.”

The CALIFORNIA LOCOS received critical acclaim in both Los Angeles and Art Basel Miami for their 2014 debut, and with CALIFORNIA LOCOS 2016, this quintet of quintessential SoCal artists will ride the endless waves even further.

ABOUT THE CALIFORNIA LOCOS:

John van Hamersveld knows how to Vegas. Check out this video of an outstanding visual
project he created for the famous Fremont street video ceiling in old school Vegas. 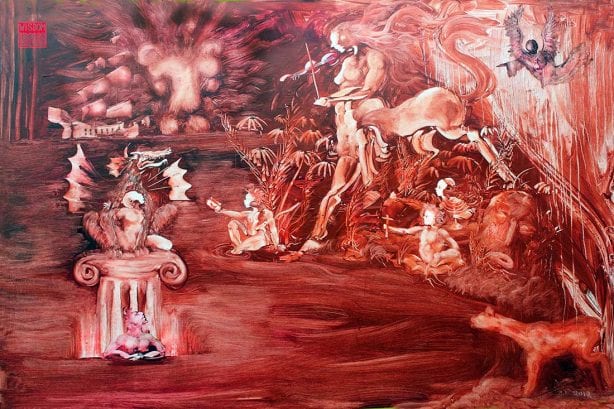 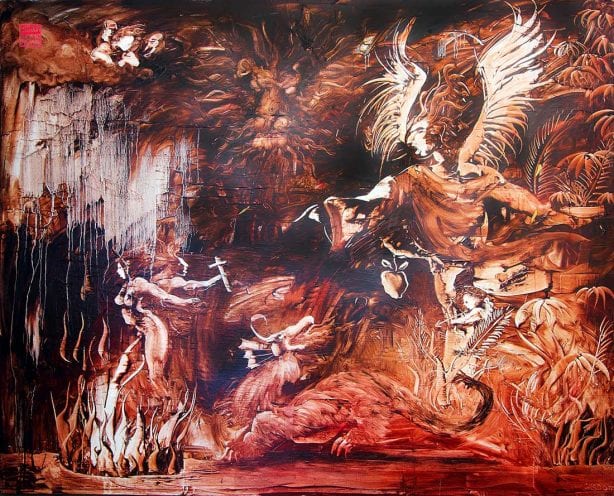 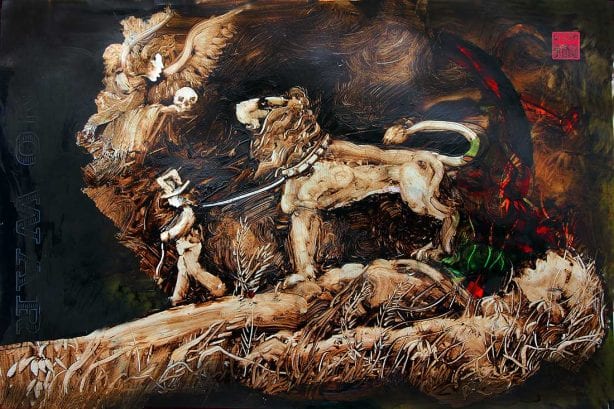 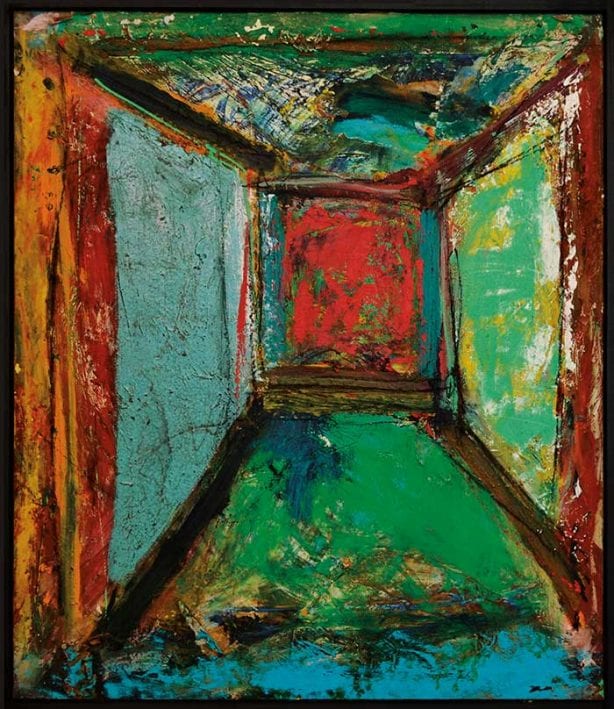 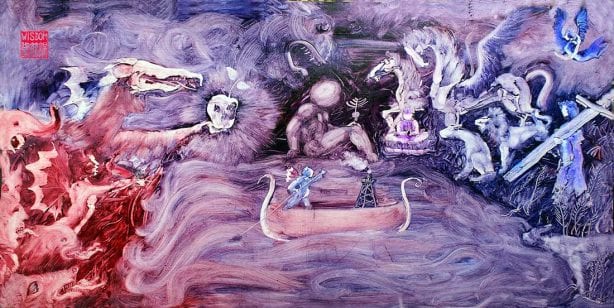 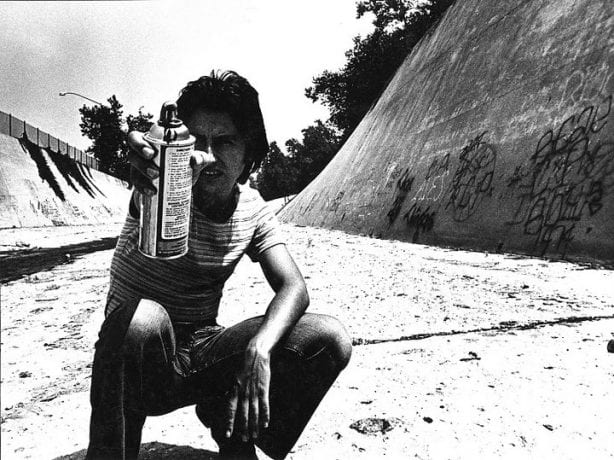 Eclectic blues provocateurs, LOS SAVAGES, featuring Ian Espinoza, Dave Tourjé, and Gary Wong with Norton Wisdom will be playing live at the Cali Locos 2016 show in Venice Beach on June 25, 2016 at Juice Magazine. It is an honor to host the Los Savages, which highlights singer/songwriter/guitar virtuoso, Ian Espinoza, who was voted Best Western Duo (along with Gary Allegretto) by the Academy of Western Artists, and regularly charts #1 on the Top 30 Cowboy / Western albums. Ian has also played with a variety of bands including The Blasters with Phil Alvin. This will be a show not to be missed.

Founded in the mid-1800s, the Arts and Crafts Movement was a radical departure from the Industrial Age’s mass production and stifling social restrictions. Standing for fine craftsmanship, advocating social and economic reforms, and rebelling against conventional social morés, Arts and Crafts was in many ways the punk rock art form of its time. And while the progenitors of Arts and Crafts stressed craftsmanship, they were not opposed to manufactured goods; they just wanted the machines to be mastered and to produce quality items. It was also paramount that the decorative elements match the use of the item. Owen Jones, one of the movement’s founders stressed, that there must be “fitness in the ornament to the thing ornamented.” It’s that spirit, transferred through a century and a half of social upheavals that finds its way into a new line of skateboards which features artwork by a legendary group of artists, the California Locos. The Locos—Chaz Bojorquez, Dave Tourjé, John Van Hamersveld, Norton Wisdom, and Gary Wong—represent 50 years of Los Angeles art, each having been influenced and inspired by the surf, skate, punk rock, and the barrio culture that combined in Los Angeles during the 1980s and 90s. The art they innovated—combining graffiti, Pop Art, jazz and punk—has gone global, just like that ulitmate SoCal sport, skateboarding. Arts and Crafts utilized folk art motifs raised to a higher level as well as stylized images from nature as its foundations. And the art that the Locos create, with its roots in graffiti, surf, skate and punk rock, is modern edgy “folk” art —these folks being urban punks whose experiences with nature were the beaches where they surfed, the cement pipes and empty swimming pools where they skated, and the streets where they ran. These five skate decks, intended for use, appeal to art collectors and art-loving skaters alike, and each are as individual as the artists themselves. The California Locos skateboards, manufactured by Dusters California with Creative Director Nano Nobrega, carry through the founding concepts of the Arts and Crafts Movement. Noted art critic Shana Nys Dambrot commented, “It’s a rare enough thing, the creation of commercially available design objects emblematic of countercultural art history and contemporary fine art, with epic attention to the finer points of rough, sexy, funny, political, and avant-garde post-punk beauty. Yet these decks retain the rawness of the unique original works that have inspired generations — including the coming up of the designers who produced the line. Furthermore, these works’ production value and durable craftsmanship are at the apex of functional design that only the world’s leading design and distribution outfit could deliver. “ The California Locos/Dusters boards will be included as part of a bi-coastal show featuring new works by Bojórquez, Tourjé, Van Hamersveld, Wisdom, and Wong that explore both the sun and the shadows of Southern California. The week-long shows, sponsored by JUICE Magazine with Terri Craft and Dan Levy, begin appropriately in Venice, CA for the week of June 25 to July 1 and then move to Virginia Beach, VA August 13 to 20th, at Studio 17. Each show’s opening night will provide a multi-media experience with live music from Los Savages (featuring Ian Espinoza, Bryan Head, Jim Grinta, Toby Holmes, Tourjé and Wong) with live painting by Wisdom, and clips from the documentary Crazy World Ain’t It—The Life and Times of John Van Hamersveld. The Locos received critical acclaim in both Los Angeles and Miami for their 2014 debut, and with CALIFORNIA LOCOS 2016, this quintet of quintessential SoCal artists will be riding the waves styling the streets even further. – Shana Nys Dambrot

“Artists have a responsibility to their work to raise it above the vernacular.”
– Rene Ricard, The Radiant Child, Artforum, 1981

To raise one’s art above the vernacular is to make monumental what no one could before, to take that which is tangible and forge the unreal; to avoid what’s popular in exchange for extraordinary. No group of west coast artists–from this writer’s perspective– manifest the words of the late, great art critic, Rene Ricard, better than the California Locos, artists who helped inaugurate the California-as-brand lifestyle as spectacularly as the Beach Boys or The Mamas and the Papas with their 1965 smash hit California Dreamin’. Back when Abstract-Expressionism, Assemblage, Finish Fetish and Light & Space inseminated the Rock, Surf, Punk and Skate culture of Los Angeles in the 1960’s and 70’s,  a new, bastard-like, breed of artist emerged and a nascent groundswell of pure native-Angeleno voice started to clamor throughout the entire SoCal urban-sprawl region–around places like Avenue 43 in Highland Park (a no man’s land of turf wars and violence and home to the Avenues Gang) or along the Arroyo Seco, the ‘dry stream’ that runs up and through this Northeast LA hood. Highly individualistic and unconventional, these artists were born with such a counterculture mindset and fervor, with such dynasism and a style completely their own, that the artist–like the art itself–deviated from the easel to the skatepark, from the gallery to the ‘Locals Only’ break at Huntington Beach, from safe studio with brushes to enemy territory with spray cans, from stretching canvases to shaping surfboards, these artists created an art form that characterized and interpreted their SoCal lifestyle like no one before them. Theirs was a subculture born on the periphery of legitamacy, in gangs, punk bands and surf line-ups, and they rolled fiercely independent, rebellious and fearless and have names like Tourjé, Van Hamersveld, Wong, Bojórquez and Wisdom and who are without question equals to their east coast rivals –to the likes of Rene Ricard’s ‘Radiant’ children Basquiat, Haring and Rifka. These are artists who upon further DNA testing (and a few record breaking auctions) will prove beyond doubt that they are De Kooning’s, Ruscha’s, Baldessari’s, and Hockney’s, legitimate heirs.  –by Gregory de la Haba