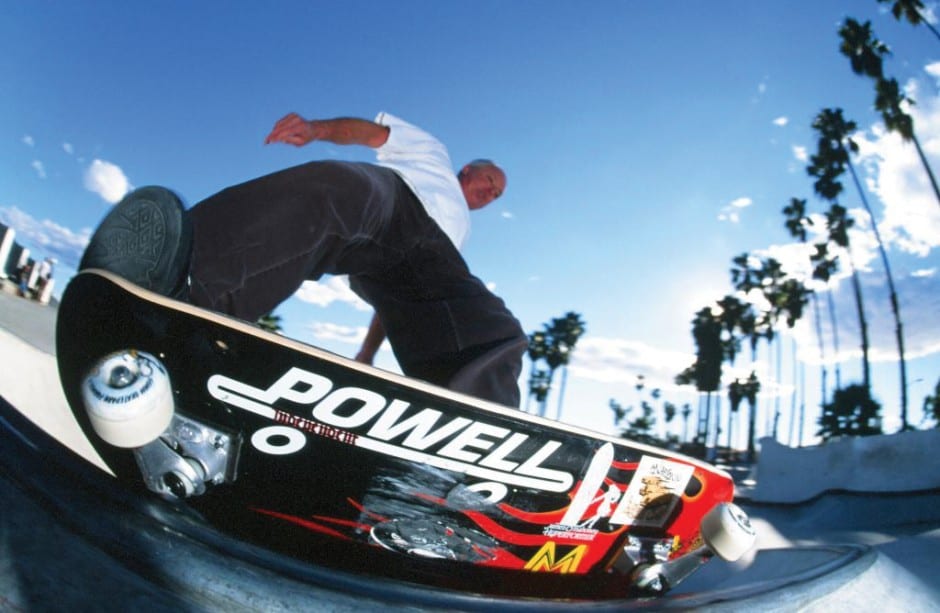 James O’Mahoney is one of the most interesting people on the planet. For those that may not already know O’Mahoney as a Skateboarding Hall of Fame Icon or the one responsible for submitting the word “skateboard” to the dictionary, you should be interested to know he was one of the earliest to skate and photograph skateboarding at the Mt. Baldy full pipe with the likes of Waldo Autry, Kevin “The Worm” Anderson and Herbie Fletcher.

In the past, you could easily find James O’Mahoney at his Santa Barbara Surfing Museum, however these days he is a little harder to find as the revered museum has closed its doors and many of its treasures are now up for auction at Bonhams “California Dreaming” presented by TCM. The bidding ends August 12, 2020 at 13:00 PDT., so get in there and bid now at https://www.bonhams.com/auctions/26310/.

Surf and Skate in Film

Juice Magazine checked in with James O’Mahoney to find out more about this incredible opportunity to collect some of the most interesting surf and skate memorabilia in the world.

JUICE: Tell us about the Bonhams TCM Presents “California Dreaming” auction and how it came to be.

O’MAHONEY: The Bonham’s people came here to look at Hollywood stuff and, when they found out that I had a surf museum, they were doing jumping jacks because they always wanted to do a surf auction. Then the further we got into it, I suggested that there should be skateboard pieces included because both sports are joined at the hip.

O’MAHONEY: The SBSM was started with the first piece of surfing memorabilia that I kept in the 1950s. I rode my first wave in 1952 and got the bug. Things got more serious around 1957 when we were actually called surfers. I kept every surf movie poster and anything surf related. The book “Gidget” came out and the whole California surf craze started. (The Gidget book and my first custom Velzy-Jacobs surfboard are in the Bonham’s “California Dreaming” auction). Up to 1992 I collected everything surf and surf related: Hawaiiana, ukuleles, surf guitars, posters, stickers, etc. The SBSM building was sold two years ago and I have been dragging my feet to get out, but now is the time to pass all the museum pieces along.

JUICE: You have run wild for many years with some of the most talented creatives in the surf/skate/music/art/hot rod world, including the likes of Kevin Ancell and Renny Yater. Tell us about your gang of cohorts and their contributions to our culture and why you enjoyed working with them and hanging out with them through the years as well as collecting their work.

OMAHONEY: In the Bonham’s auction, you’ll find the Yater collection featuring his best pieces, each 1 of 1. I’m fortunate to have known a lot of the pioneers of the sport and could write a book on them all, but there is still a statute of limitations.

JUICE: “The Surf Rat” Hot Rod Surfboard that you designed seems to combine some of your favorite things – surfing and hot rods.

OMAHONEY: “The Surf Rat” was a concept that I used to draw in the fifth grade and five years ago I just made it. In the museum, one out of ten would not accept that it was an art piece and had to ride it! The sign stated “Object de art.” Anyone with a drop of oil in their blood gets it.

JUICE: How did you end up with Elvis’ St. Christopher medal? Do you have any interesting factoids or Elvis stories that you can share?

O’MAHONEY: I bought the Elvis St. Chris at an auction in London. When I saw the catalog pic was a St Chris, I had to jump on it. The surfer’s patron saint – best St. Chris on the planet. I met Elvis in Las Vegas when my pal, Danny Brucker, taught Priscilla how to ride a Harley.

JUICE: In your esteemed opinion, which are the most valuable and eclectic surfboards in the “California Dreaming” auction and what makes them so important in the history of surfing?

O’MAHONEY: Most of the surfboards in the auction are historic, from the Pacific Systems, Blake, Velzy-Jacobs, Yater, Keating wood boards to the Hobie Phil Edwards, Morey Pope Slug, Dewey Weber red fin, and Carl Ekstrom’s last mini gun for Dicky Moon, etc. They are all great.

O’MAHONEY: I owned the original “Apocalypse Now” surfboard from the movie and, in 2005, Renny [Yater] made a limited edition of 90 reproductions. I sold the original to Jimmy Buffett in 2007.

JUICE: You have a fantastic collection of ukuleles. How did you start collecting ukuleles and which do you treasure the most and could you talk about any interesting jam sessions that you’ve had with other ukulele players?

O’MAHONEY: I had a guitar store here in Santa Barbara in 1983 and just started keeping the ukes because they were small, The ones in the auction are great, from the iconic Martin 5-K, Kamaka, Weissenborn, etc. All rad. Best jam on ukes was with Jeff Beck when he played at the Arlington here. When the show was over, Seymour Duncan and I went to Jeff’s trailer and jammed on the peewees.

JUICE: What are the most prized skateboards in the “California Dreaming” auction and what made them special enough for you to collect?

O’MAHONEY: Best skateboards in the auction are two Tom Sims prototypes. The first is a Maherajah deck that Tom was going to produce with Gullwing H.P.G. lV trucks, and Road Rider red urethane wheels, but Maherajah did it themselves. All of Tom’s first skate competition was on waterskis. He was on my 1975 Skateboard Magazine World Championship Team. Plus, he started his company here in Santa Barbara. The other prototype is a Doug De Montmorency laminated deck.

JUICE: You took some of the most published and well known skateboarding photos in the early pre-graffiti days at Mt. Baldy showing that a skater could go past vertical. What was it like the first time you skated and shot photos at the Baldy pipe?

O’MAHONEY: Jim Higham found Baldy and we skated it every day for a couple weeks and brought all the bros: Waldo Autry, Herbie Fletcher, Kevin Anderson, etc. It was the Mecca and now it’s on every skater’s bucket list.

JUICE: Your collection of Fender guitars is impressive. Which of these guitars will be the most difficult for you to part with?

O’MAHONEY: The Yater Fender surf guitars in the auction are the three prototypes that we made in 2009 – shaped bodies by Reynolds Yater, a Teardrop pintail, Surfcaster pintail and Hawaii pintail, designed and built by surfers, rosewood necks by Phil Kubicki (At the Fender custom shop, he made rosewood necks for Jimi Hendrix and George Harrison), custom Seymour Duncan Surftone pick ups, paint by Jim Lombard and Tom Kelley. There is also a original 1959 Fender Stratocaster and 1964 Jaguar etc.

JUICE: You have hosted, organized and participated in a vast number of landmark events in the surfing, skateboarding and music world. Can you talk about a few of those experiences and what motivated you to get involved? Did any of these events result in further acquisitions of interesting surf skate music art and hotrod memorabilia?

O’MAHONEY: I want to thank Terri and Dan at Juice Magazine for what they have consistently done, dedicated their life too our sport. They are current unsung heroes. Thank you for letting me squeak my little stuff in. LONG LIVE JUICE!

“James O’Mahoney is a fascinating person to talk with. Whether it’s about his vast range of endeavors or fearless pursuit of pleasure, you’re instantly caught up in his enthusiasm for life that’s extremely intoxicating. As a life long collector of anything that caught his imagination, you get the feeling, when talking to him, that he’s gathering information from you as he would on a scavenger hunt as you scramble through the memories of more than half a century. Every time we speak, it’s like discovering all over again a unique unexpected pleasure in someone that’s managed through all the ups and downs to really stay stoked and maintains the free spirit that most of us lose along the way. His myriad of accomplishments and the images that he’s captured over the years are a stunning affirmation of living life on the edge, and that’s something to be admired.” – WORDS BY DIBI FLETCHER

FIRST SKATEBOARDING RONALD MCDONALD – I WAS THE 3RD RONMC

CBS CHALLENGE OF THE NETWORK STARS-GRIZZLY ADAMS VS KRISTY MCNICHOL