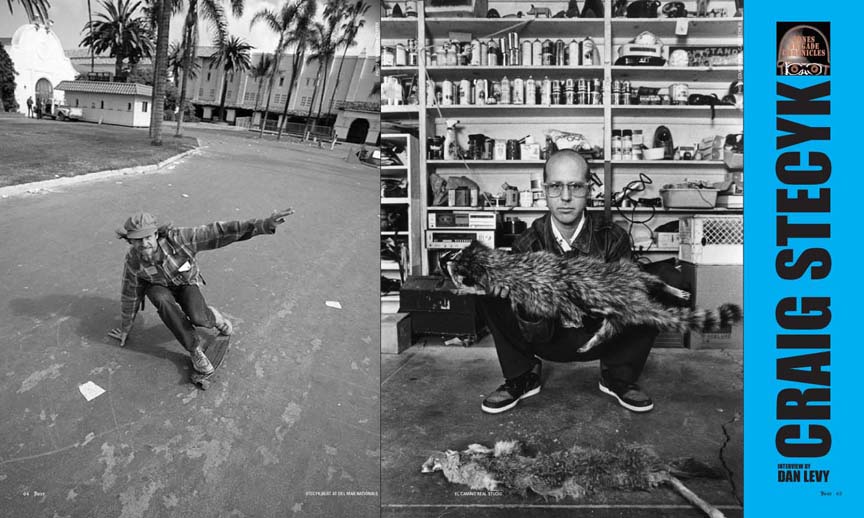 If true validation is in the process of creating then Craig is constantly validated. The beginning and the end are arbitrary as his work is a reflection of the single moment of its creation. Craig has been undeniably instrumental in creating, cultivating and documenting some of the most influential times in counterculture history. From skateboarding, surfing and the California lifestyle to street art, hot rods and mass propaganda, he appears omnipresent and aloof all at once. It is with great honor that we bring you the one and only Craig Stecyk III.

“When the great power shortage comes and destroys the digital archive of the country and there are no more petrol chemicals available at your gas station for your drive around, you’re going to find out that pedestrians and skateboarders and bike riders will inherit the universe.”

What made you want to get into making films in the first place? What was the appeal?
I grew up in a family where my father was a documentarian and my mother was a ceramicist, so I had access to tools and materials. He had been tasked with recording events in World War II, such as Hiroshima’s aftermath and made various combat/service images. There were cameras and also a dark room at home, as well as a ceramics studio, paint spray technology and metal working tools, so we could make anything we wanted. It didn’t seem like anyone else was really covering progressive surfing or skating and, as a result, there were critical viewpoints that weren’t represented. It seemed like a logical thing to do. With Zephyr, Jeff Ho, Skip Engblom and I were seriously involved with design. We were all about building things and trying to develop new methodologies. I used photography as a tool to record how the shapes worked and how they responded. The impulse to film skating was done out of necessity. I was driven to shoot Inglewood hill and filmed it trying to find the perfect contour line. I never pulled it on clay wheels with Chicago trucks though, but later, with Indy’s and precision bearings, the line I found through topographic film analysis worked right.

Did you just teach yourself, or were you trained in photography?
I just picked up a camera and used it. I didn’t really know how it worked and, in fact, broke all of my father’s equipment. Gradually, I absorbed formal theory through attrition and repetition of tasks.

At what point, did the Powell Peralta opportunity present itself and why did you choose to move forward with the first video project?
Stacy was a part of the local surf and skate scene and I knew him through that. Then we worked on projects together related to Zephyr and later Gordon and Smith. Powell was one of his contacts. I was unaware of George’s activities, although I had seen the double radial wheel.

As far as the jump from photography to film, did you have any premonition that video would be so widely available eventually?
Well, at that point, to get a film made, you had to go to a lab and subject yourself to certain amount of scrutiny, meaning they wouldn’t process your film if it had objectionable content. There were censorship and applied professional standards of exclusion at work. When I would get 16mm and 35mm motion picture film processed, I would go wait in line and get a lesser degree of service than the folks at Universal Studios or Warner Bros or Paramount or 20th Century Fox. Those studio types were spending millions and controlled all of the labs. I would develop film stock by myself and it took forever to get anything done. Video offered a chance to tell alternative stories quickly and economically with no censorship. It was very difficult then to get broadcast on network television. Video completely obviated the entire distribution system and all of the barriers that were in place, so I was attracted to the medium. I used it in my own personal work, and had shot skating and surfing on black and white reel to reel tape. Years later, when we got the first Bones Video done, there were very few people that even had VCR machines yet. We made the first skate video, but very few people were able to watch it. The premiere was in Frank Hawk’s living room on a rented machine. I doubt that there were more than a dozen people there.

So the VCR hadn’t quite made it to every American home yet, but you had a broader audience than you did before.
Well, it took a while. Before that, I had worked on assorted film projects, which involved skating and surfing with people like Jamie Budge, Hal Jepsen, Grant Rohloff, Art Brewer, Ray Allen, Pat Darrin and Chris Carmichael. They would take their 16mm films and four wall them in showings whenever they could wrangle up an audience.

Now, with this whole new medium you had with video, the doors were wide open, so why did you choose to film surfing and skateboarding?
Initially, no one was doing it. Being able to play stuff back on the spot and reviewing it was ridiculously instructive, so the design process drove me to do it. Seeing what the equipment was doing, flex, torque, and the like, was rewarding. For art, I primarily did other things like painted surfboards, skates, cars, cast metal pieces and made posters. Eventually the art imagery started to be adapted. The Animal Chin, Skate and Destroy, Public Domain, Prevent This Tragedy and the Mountain Skull all were originally street pieces. Stacy was aware of my black and white reel-to-reel art joints. In a typical piece from that period, I recorded a nude model wearing only a household apron stuffing hot dogs into turkeys. It was equally a jarring feminist manifesto and a cryptic erotic satire. Art that I made was based upon whatever I happened to be doing and the tapes were being shown at galleries and events. One day I shot a fatal car crash on the Coast Highway when I was out making my daily art tapes. A guy from CBS walked up and said “We’ll give you $200 if you give us that collision footage to put on the news.” All of a sudden, I realized that I’d been inadvertently sucked into the commercial system.

[Laughs] Citizen journalism 101, right?
Instantly, I saw the vertical aspect to this. It was a dismal, awful thought, this depressing end game in arts and media that’s sort of akin to paying someone for sex. If you’re a romantic, you might think that getting money cheapens the act. That’s a very Victorian view and I don’t think it’s particularly applicable to modern society.  The current standard has become that the more a piece of art costs, then the better it becomes.

That’s an interesting perspective. If it bleeds, it leads, on the news. Was that your first taste of the sensationalism of fatalities?
Well, I had an instantaneous record of it since I was on the scene and there were not that many people about with video cameras. At that point, I had a U-matic ¾ inch professional standard camera. I would check into a hotel and drop TVs into swimming pools with long cords on them. That was one of the things I was attracted to doing. I still am enthralled by what happens. They’re like science films. On the crash day, I was on the way to shoot another implosion experiment at the Central Towers in Santa Monica. We operated out of there. I was out just shooting for no reason and, all of a sudden, some local news personality is offering to buy the cassette of it. You end up being the wrong guy at the right place at the right time for other reasons. Right off the bat I was being broadcast. It was hard not to realize the implications of that as far as getting skateboarding seen.