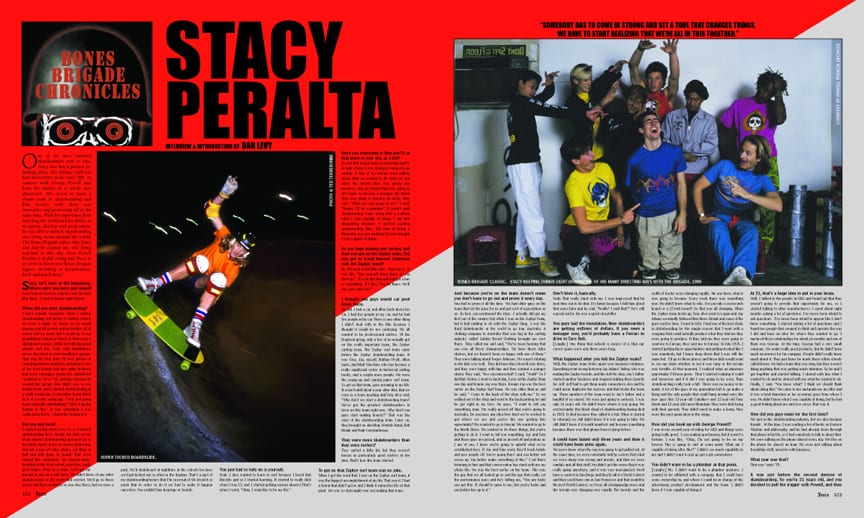 One of the most talented skateboarders ever to ride, Stacy also has a passion for making films. His timing could not have been better in the early ’80s  to connect with George Powell and hone his talents in a whole new dimension. His vision to form a dream team in skateboarding and film movies with them was innovative and pioneering all at the same time. With his experience from traveling the world and his ability to recognize, develop and push talent, he was able to launch skateboarding into living rooms around the world. The Bones Brigade videos that Stacy and Stecyk created are still being watched to this day. Now Powell Peralta is in full swing and Stacy is at work on his newest Bones Brigade legacy including a documentary, book and much more…

“The backyard series was a really interesting strategy because we really felt it would do two things at a time. One, it would take the emphasis off established contest norms and give the anarchy element its just due.”

Stacy, let’s start at the beginning. Where were you born and raised?
I was born in West Los Angeles, and raised in Mar Vista. I went to Venice High School.

When did you start skateboarding?
I don’t actually remember when I started skateboarding, but before I started school, we were a single car family, so we would drop my dad off at work and my brother off at school and my mom and I would go to my grandfather’s house in West L.A. There was a skateboard scooter, a little 2×4 with the metal wheels and box crate with handlebars, across the street in some neighbor’s garage. That was the first time I’d ever gotten on something that resembled a skateboard. One of my best friends had two older brothers that were teenagers during the skateboard revolution in ‘63 or ‘64, and they had boards around the garage they didn’t use, so my friend, Kevin, and I started skateboarding at a really young age. I remember being bitten by it at a really young age. I was just going down sidewalks and thinking, “Wow. I dig the feeling of this.” It was something I was really attracted to. I liked the feeling of it.

Did you surf first?
I started surfing when I was 11, so I started skateboarding first. Slowly, the kids on my block started skateboarding and we’d go to the thrift stores down on Venice Boulevard, and get a pair of roller skates, cut them in half and bolt them to boards that were shaped like surfboards. We started skateboarding at the local school, which has really good banks. Once in a while, we’d get our parents to give us a ride there. We didn’t know of any other skateboarders in the world that existed. We’d go to these places and there would be no one else there, but we were a pack. We’d skateboard at nighttime at the schools because we’d get kicked out so often in the daytime. That’s a part of my skateboarding history that I’m so proud of. We loved it so much that in order to do it we had to make it happen ourselves. You couldn’t buy bearings or boards.

You just had to fully do it yourself.
Yeah. I also wanted to learn to surf because I loved that lifestyle and so I started learning. It started to really click when I was 13, and I started getting serious about it. That’s when I went, “Okay. I want this to be my life.”

Were you interested in film and TV at that point in your life, as a kid?
It’s not that I wasn’t interested in film and TV. In high school, I was driving to Oxnard to go surfing. A few of my friends were talking about what we wanted to do when we got older. My friend Dave was going into business, and my friend Paul was going to Art Center to become a designer. My friend Stan was going to become an artist. They said, “What are you going to do?” I said, “Maybe I’ll be a plumber.” It wasn’t until skateboarding came along that I realized what I was capable of doing. I got into filmmaking because I started making skateboarding films. The idea of being a filmmaker was not anything I’d even thought I was capable of doing.

So you kept skating and surfing and then you got on the Zephyr team. Did you get to travel beyond California with the Zephyr team?
No. We went to Del Mar once. That was it. It was like, “Get yourself down there or you don’t go.” It’s not like Skip and Jeff got a bus or something. It’s like, “You be there. We’ll pay your entry fee.”

I thought you guys would car pool down there.
We did. I had a car, and Allen Sarlo drove his car. I had five people in my car, and he had five people in his car. There is one other thing I didn’t deal with in the film because I thought it would be too confusing. We all wanted to be professional surfers. Of the Dogtown group, only a few of us actually got on the really important team, the Zephyr surfing team. The Zephyr surf team came before the Zephyr skateboarding team. It was Tony, Jay, myself, Nathan Pratt, Allen Sarlo, and Matt Warshaw who has become a really significant writer in historical surfing books, and a couple more people. We were the young up and coming junior surf team. To get on that team, gave meaning to my life. It wasn’t until about a year after that, that we were in a team meeting and Tony Alva said, “Why don’t we start a skateboarding team? We’ve got the greatest skateboarders in town on this team right now. Why don’t you guys start making boards?” That was the start of the skateboarding team. Later on, they brought on Jim Muir, Wentzle Ruml, Bob Biniak and Paul Constantineau.

They were more skateboarders than they were surfers?
They surfed a little bit, but they weren’t known as particularly good surfers at the time. That’s how the team started.

To get on that Zephyr surf team was no joke.
When I got the word that I was on the Zephyr surf team, it was the biggest accomplishment of my life. That was it. I had a friend that didn’t get in and I think it ruined his life at that point. He was so distraught over not making that team.

Just because you’re on the team doesn’t mean you don’t have to go out and prove it every day.
You had to prove it all the time. We had older guys on the team that set the pace for us and put a lot of expectation on us. In fact, you mentioned the trips. I actually did get my first out of the country trip while I was on the Zephyr Team, but it had nothing to do with the Zephyr Shop. I was the third skateboarder in the world to go tour Australia. A clothing company in Australia that was big in the surfing industry called Golden Breed Clothing brought me over there. They called me and said, “We’ve been hearing that you won all these championships. We have these older skaters, but we haven’t been so happy with one of them.” They were talking about Torger Johnson. He wasn’t relating to the kids very well. They did have Russ Howell over there, and they were happy with him and they wanted a younger skater. They said, “Are you interested? I said, “Yeah!” So I did that. Before I went to Australia, I was at the Zephyr Shop one day and Ronnie Jay was there. Ronnie Jay was the best surfer on the Zephyr Surf Team. He was older than us and he said, “ Come to the back of the shop with me.” So we walked out of the shop and went to the back parking lot and he got right in my face. He goes, “I want to tell you something, man. I’m really pissed off that you’re going to Australia. Do you have any idea how hard we’ve worked to get where we are and you’re the one getting this opportunity? We wanted to go to Hawaii. We wanted to go to the North Shore. We wanted to do these things, but you’re getting to do it. I want to tell you something. Jay and Tony and those guys are pissed, and as pissed off and jealous as I am of you, I know you’re going to uphold what we’ve established here. If Jay and Tony went, they’d trash hotels and piss people off. You’re going there and you better not screw up. You better make something of this.” I sat there listening to him and that conversation has stuck with me my whole life. He was the best surfer on the team. This was the guy that we all looked up to and the guy that really set the performance pace and he’s telling me, “You are lucky you got this. It should’ve gone to me, but you’re lucky and you better live up to it.”

Don’t blow it, basically.
Yeah. That really stuck with me. I was impressed that he took time out to do that. It’s funny because I told him about that years later and he said, “Really? I said that?” He’s still a great surfer. He was a great storyteller.

You guys laid the foundation. Now skateboarders are getting millions of dollars. If you were a teenager now, you’d probably have a Ferrari to drive to Taco Bell.
[Laughs] One thing that nobody is aware of is that our career spans were only three years long.