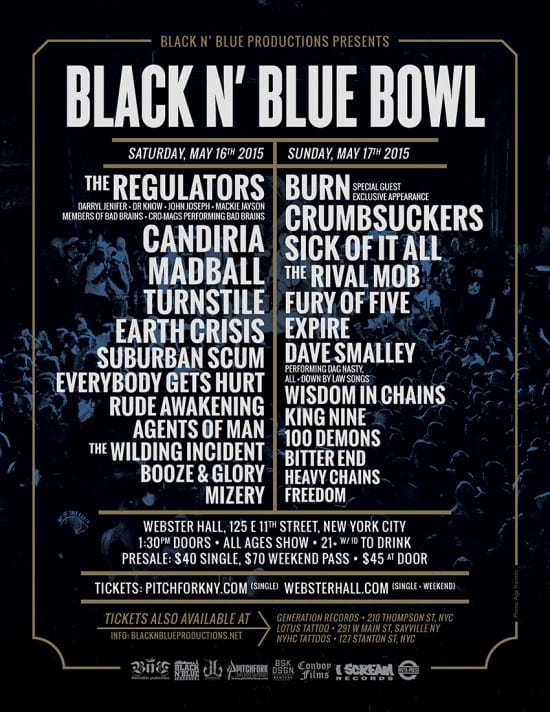 Black N’ Blue Productions has announced the line-up for its much anticipated 2015 Black N’ Blue Bowl, formally known as The Superbowl of Hardcore. This year’s Bowl will return to Webster Hall, 125 East 11th Street, New York, N.Y., May 16-17, 2015 with doors at 1:30 p.m. both days and will feature many special performances, including the return of BURN.

“Hardcore music has been instrumental in my life and I’m excited about getting on stage with Gavin again,” says BURN front man Chaka Malik. “Much respect to the folks at Black N’ Blue for the work they’ve been doing. Keeping a viable platform for bands and people in the culture to experience what’s been a big part of many of our lives is really important. The old Ritz is a fitting venue for BURN to bring the energy we were known for in the past.”

This year also features The Regulators, comprised of Darryl Jenifer and Dr. Know (Bad Brains) alongside John Joseph and Mackie Jayson (Cro-Mags). Not much is known regarding the band’s performance, but Black N’ Blue Productions said to expect an incredibly historic set. Hailing from Brooklyn, N.Y., Candiria will also make a return to the stage, alongside The Wilding Incident featuring Lord Ezec on vocals, Jimmy Williams (Maximum Penalty) on drums and Sacha Jenkins on guitar, Madball, Turnstile, Earth Crisis, Agents of Man and many more.

Freddy Cricien, Madball, Black N’ Blue Productions, says, “This is our eleventh year doing the Bowl and I’ll be honest, it doesn’t get any easier. I think we have delivered on a few different levels for 2015: we’re back at Webster Hall (the old Ritz), we have some exciting classic acts and some new blood of course, and as always, some surprises. I’m looking forward to this on every front, as a fan, a participant and a promoter. Thanks to all who support year after year!”

The weekend will close on Sunday, May 17 with special guests BURN, New York Hardcore/Crossover legends the Crumbsuckers, supported by Sick of It All, The Rival Mob, Wisdom in Chains, plus others.

For the complete line-up, visit: www.blacknblueproducts.net.

About the Black N’ Blue Bowl

The Black N’ Blue Bowl, formally known as The Superbowl Of Hardcore, started in New York in the early 80s at the legendary Ritz. Those early days it featured all the forefathers of the renowned New York Hardcore movement like Warzone, Agnostic Front, Sick of it All and Gorilla Biscuits.

In 2005 Black N’ Blue Productions brought this legendary event back and promised to keep the tradition alive. What started out as a one-day event turned into a two day Punk & Hardcore extravaganza in 2013 with the return of New York Hardcore legends Judge. Since 2005 BnB Productions have welcomed the likes of Rancid, Judge, Vision Of Disorder, Cro-Mags, Madball, SheerTerror, Gorilla Biscuits, Sick Of It All, Agnostic Front, H2O and Terror, naming only a few.

Black N’ Blue Productions, run by Cuzn Joe, Freddy Cricien (Madball) and friends, is the Hardcore production company in the greater New York area and beyond. The BNB events are legendary for bringing back the old and ushering in the best of the new, whether producing the sold-out Black N’ Blue Bowl, smaller club shows, European tours or parties.

PrevPreviousThe Damned Documentary
NextLoud Ones – In The Van #13 – Fred SmithNext