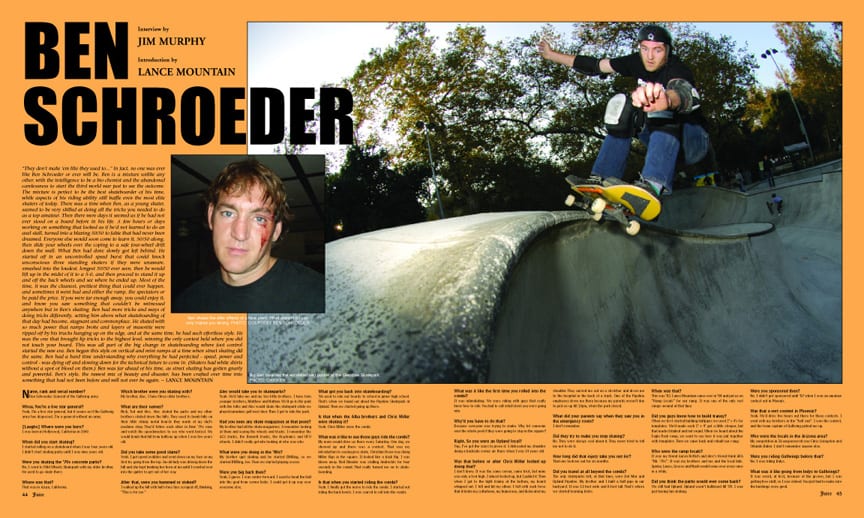 They don’t make ’em like they used to… In fact, no one was ever like Ben Schroeder or ever will be. Ben is a mixture unlike any other, with the intelligence to be a bio chemist and the abandoned carelessness to start the third world war just to see the outcome. The mixture is perfect to be the best skateboarder of his time, while aspects of his riding ability still baffle even the most elite skaters of today. There was a time when Ben, as a young skater, seemed to be very skilled at doing all the tricks you needed to do as a top amateur. Then there were days it seemed as if he had not ever stood on a board before in his life. A few hours or days working on something that looked as if he’d not learned to do an axle stall, turned into a blazing 50/50 to fakie that had never been dreamed. Everyone else would soon come to learn it, 50/50 along, then slide your wheels over the coping to a safe four-wheel drift down the wall. What Ben had done slowly got left behind. He started off in an uncontrolled speed burst that could knock unconscious three standing skaters if they were unaware, smashed into the loudest, longest 50/50 ever seen, then he would lift up in the midst of it to a 5-0, and then proceed to stand it up and off the back wheels and see where he ended up. Most of the time, it was the cleanest, prettiest thing that could ever happen, and sometimes it went bad and either the ramp, the spectators or he paid the price. If you were far enough away, you could enjoy it, and know you saw something that couldn’t be witnessed anywhere but in Ben’s skating. Ben had more tricks and ways of doing tricks differently, setting him above what skateboarding of that day had become, stagnant and commonplace. He skated with so much power that ramps broke and layers of masonite were ripped off by his trucks hanging up on the edge, and at the same time, he had such effortless style. He was the one that brought lip tricks to the highest level, winning the only contest held where you did not touch your board. This was all part of the big change in skateboarding where foot control started the new era. Ben began this style on vertical and mini ramps at a time when street skating did the same. Ben had a hard time understanding why everything he had perfected – speed, power and control – was dying off and slowing down for the technical future to come in. (Skaters had white shirts without a spot of blood on them.) Ben was far ahead of his time, as street skating has gotten gnarly and powerful. Ben’s style, the rawest mix of beauty and disaster, has been crafted over time into something that had not been before and will not ever be again.

“I WALKED UP THE HILL WITH HALF OF MY FACE SCRAPED OFF, THINKING, “THIS IS FOR ME.”

[Laughs] Where were you born?
I was born in Hollywood, California in 1969.

Were you skating the ’70s concrete parks?
No, I went to Wild Wheels Skatepark with my older brother. He used to go skate there.

Where was that?
That was in Azusa, California.

Which brother were you skating with?
My brother, Alec. I have three older brothers.

What are their names?
Nick, Ted and Alec. Alec skated the parks and my other brothers skated down the hills. They used to bomb hills on their little skinny metal boards they made at my dad’s machine shop. They’d follow each other in their ’70s vans and watch the speedometers to see who went fastest. We would bomb that hill from halfway up when I was five years old.

Did you take some good slams?
Yeah. I got speed wobbles and went down on my face on my first try going from the top. An old lady was driving down the hill and she kept honking her horn at me until I crawled over into the gutter to get out of her way.

After that, were you bummed or stoked?
I walked up the hill with half of my face scraped off, thinking, “This is for me.”

Alec would take you to skateparks?
Yeah. He’d take me and my two little brothers. I have twin younger brothers, Matthew and Nathan. We’d go to the park with the folks and Alec would skate the skatepark while we played miniature golf next door. Then I got to ride the park.

Were you big back then?
Yeah, I guess. I was center forward. I used to head the ball into the goal from corner kicks. I could get it up way over everyone else.

What got you back into skateboarding?
We used to ride our boards to school in junior high school. That’s when we found out about the Pipeline Skatepark at Upland. Then we started going up there.

What was it like to see those guys ride the combi?
My mom would drive us there every Saturday. One day, we showed up and there was a contest. That was my introduction to seeing pros skate. Christian Hosoi was doing Miller flips in the square. It looked like a back flip. I was blown away. Neil Blender was stalling Andrechts for four seconds in the round. That really turned me on to skateboarding.

Is that when you started riding the combi?
Yeah. I finally got the nerve to ride the combi. I started out riding the back bowls. I was scared to roll into the combi.

What was it like the first time you rolled into the combi?
It was intimidating. We were riding with guys that really knew how to ride. You had to call which bowl you were going into.

Why’d you have to do that?
Because everyone was trying to snake. Why let someone own the whole pool if they were going to stay in the square?

Right. So you were an Upland local?
Yep, I’ve got the scars to prove it. I dislocated my shoulder doing a backside corner air there when I was 14 years old.

Was that before or after Chris Miller locked up doing that?
I don’t know. It was the same corner, same trick, but mine was only a foot high. I almost locked up, but I pulled it. Then when I got to the tight tranny at the bottom, my board whipped out. I fell and hit my elbow. I fell with such force that it broke my collarbone, my humerus, and dislocated my shoulder. They carried me out on a stretcher and drove me to the hospital in the back of a truck. One of the Pipeline employees drove me there because my parents weren’t due to pick us up till 10pm, when the park closed.

What did your parents say when they saw you in the emergency room?
I don’t remember.

Did they try to make you stop skating?
No. They were always cool about it. They never tried to tell me not to do it.

How long did that injury take you out for?
That one took me out for six months.

Did you travel at all beyond the combi?
The only skateparks left, at that time, were Del Mar and Upland Pipeline. My brother and I built a half pipe in our backyard. It was 11-feet wide and 8-feet tall. That’s where we started learning tricks.

When was that?
This was ’83. Lance Mountain came over in ’84 and put us on Ramp Locals for our ramp. It was one of the only vert ramps around at that time.

Did you guys know how to build tranny?
When we first started building halfpipes we used 2 x 4s for templates. We made each 2 x 4 get a little steeper, but that made it kinked and not round. When we heard about the Eagle Rock ramp, we went to see how it was put together with templates. Then we came back and rebuilt our ramp.

FOR THE REST OF THE STORY, ORDER ISSUE #59 BY CLICKING HERE…