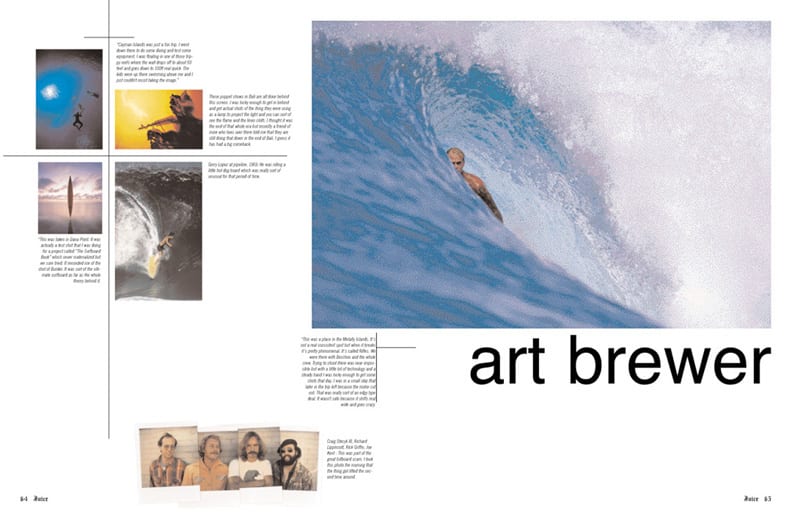 Since I first opened up the pages of Surfer Magazine, Art Brewer is someone that I’ve had the utmost respect for as a photographer,. Art was working for Surfer, being sent on assignments, when he was still in High School. Think about this and how much our culture has changed, It’s a far cry from Jon Severson selling copies out of the back of his van. And just as far a cry as Surfer sending a High School kid out on assignments. But then again they were not just sending some high school kid they were sending Art Brewer. So I ask you the reader to bow your heads in respect to the man who once aimed an infrared beam on the chest of the late, great Mickey Dora and shot him.

Talk about your first experience with a camera.
It would probably be a movie camera. It belonged to my father and I’d take it down to the beach to a place called Agots Reef in Laguna Beach. I had it in a plastic bag. I used a goggle clamped down on one end to make it waterproof. That was basically the start of it, and playing around with my dad’s Polaroid camera.

“I always looked up to a guy named Spider Wills. He was a movie photographer and he taught me a lot about using film and auto focus with big lenses. I think the composition came from some of my art instructors in school who were very talented artists themselves. And then Bud Brown and Macgillivary just because of their images of surfing. One of the other classics was Ron Stoner.”

Did you know then that you were going to be a photographer?
Not a clue. I was always interested in art and classic style paintings. I grew up with The Post, Life Magazine and National Geographic. And growing up in Laguna there were different photographers who were friends with my parents. My parents weren’t artists or anything but they knew everybody. It was a small town. I was always affected visually.

What was it like being on the set of Big Wednesday?
There were times in Hawaii when all of the stars of the film were all coked up and partying. I’m not saying any names but it was pretty crazy. They were all running around like mad men.

Did you have a good time?
Oh yeah. I had a lot of laughs. It was funny to see guys like Bill Hamilton getting their chests shaved so they could look more youthful. It was pretty much a constant party.

Do you have any mentors that you look to for advice?
I always looked up to a guy named Spider Wills. He was a movie photographer and he taught me a lot about using film and auto focus with big lenses. I think the composition came from some of my art instructors in school who were very talented artists themselves. And then Bud Brown and Macgillivary just because of their images of surfing. One of the other classics was Ron Stoner.

How do you deal with the industry affecting your art?
Well, you’re always going to suffer one way or another. Everybody has their vision and when you’re dealing with it on a commercial level you sort of have to give in. Even working on the book project there are things that I didn’t want to use but you’re working with a book publisher and they want to use them. In the end, they really had valid ideas on what things should be used. They see some things that I don’t. And I sometimes think, I can be my worst critic.

What was it like meeting up with Peter Beard in Mountauk?
That was a great experience. It was really a trip. He had rented the Warhol estate museum because he was putting together his show for Italy. He was so accommodating. He was in the middle of a project and he just invited us in. I asked if he would mind if I took some pictures and he said not at all. He was enjoying himself quite a bit while we were there.

He opened up to you guys?
Oh yeah. He was getting high. He felt quite comfortable with us being around. He wasn’t apprehensive at all. He figured we wouldn’t be there if we weren’t in the loop in Montauk.

What is the most intense situation you’ve ever had on a photo shoot?
Probably the most drawn out one was traveling with Bunker. He was up and down constantly. It was a wild time.

Was Bunker a hitman or a diamond smuggler?
He wasn’t a hitman. He was a talented martial artist and he was quite a good gunman. He liked to hunt. He used to go with Clark Gable all the time; Clark being his stepfather. As far as the diamonds that’s a possibility. The whole two months we were in South Africa we were being followed by the police.

That must have been intense.
Yeah he was running around. He was a bit crazy. He wasn’t normal. He hooked up with this guy from the CID which was some kind of police organization. There was always some guy checking us out. There were times when he wasn’t around. The diamond thing is a good possibility. I have a feeling that some diamonds were moved one way or another.

What was the craziest thing you have ever done or seen with Bunker?
Probably the night of his birthday when he basically went nuts because he got jealous about his girlfriend. He threw her through a plate glass window and then started dancing with her on this dance floor in front of all the Jeffries Bay townspeople that he had invited for his birthday. He basically tore the place apart dancing with her and throwing her across this big slick floor and then running over and picking her up pulling her into his arms and spinning her and throwing her across the floor. She ran away and hid in a room and this farmer came and nabbed her and took her to safety. Bunker didn’t know where she went. He went on a rampage kicking in doors at the beach hotel. He had rented the whole hotel. He totalled two Mercedes and I just sort of walked away from the situation at that point. It was pretty gnarly the next morning. I woke up and I was eating breakfast and I see these two hands climbing this 8 foot wall in front of me. These hands come over the top of the wall and there is Bunker with the same blue blazer with these German riding boots and a pair of white bell bottom pants, the same clothes he had on the night before. Later that day he tried to shoot me. He shot at me and this South African guy, Tony Vannet, tackled me to the ground just before the bullet grazed off the wall.