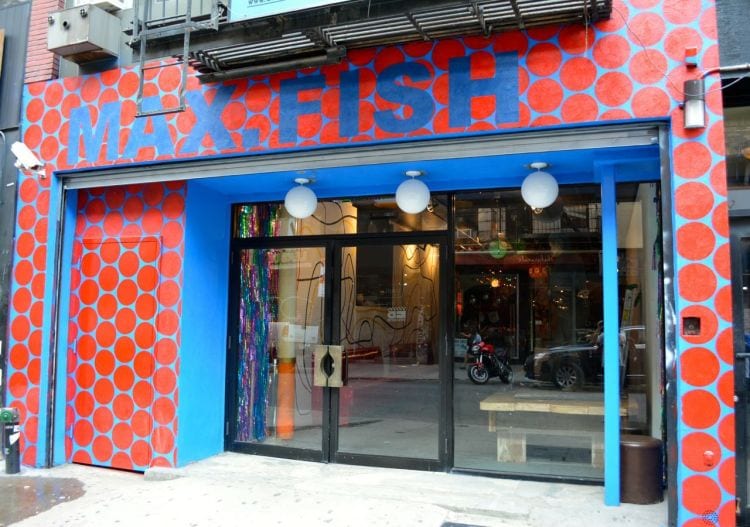 Congrats to Ulli Rimkus, Marc Razo and the whole Max Fish crew for keeping the iconic bar and creative vortex going strong for 30 years. Cheers! Check out all the info about the new shoe that adidas has created to celebrate and honor the legacy of Max Fish and its contributions to the community of skateboarding, music and art on the L.E.S. since 1989.

adidas Skateboarding celebrates 30 years of New York City’s iconic Lower East Side (LES) mainstay and skateboarding cultural institution, Max Fish. As a brand that has continuously supported the venue and the creators within, the two come together to design a special footwear collection set to release later this month. Paying further homage to the landmark, adidas Skateboarding and Max Fish will host an anniversary celebration that invites friends and family for a special event at the space called home by local artists, musicians, and skateboarders since its founding in 1989.

The collaborative Max Fish Campus ADV will arrive in a premium navy suede upper, emblazoned with the venue name atop of a screen printed red polka dot—a design aesthetic that pays homage to The Fish’s famed blue and red polka dot interior. The style will release in an extremely limited run and will be sold exclusively through select national skateboard retailers and Max Fish.

On Sunday, July 14th, adidas and Max Fish will host a private celebration that will gather friends, family and members of the local skate and art community who have been a part of the bar’s thirty-year legacy. A photo and t-shirt retrospective will be on display, showcasing works from those who have been part of the bar’s storied past and those who help to carry on its legacy today.

“We are happy to kick off our first 30-year anniversary partnership with adidas Skateboarding,” Marc Razo, Co-Owner of Max Fish said. “The brand’s commitment to the community mirrors our own. It’s been such a fun project to work on and we are thankful to everyone who made this dream a reality.“

The partnership with adidas Skateboarding marks the first of four special projects that Max Fish will reveal with additional brands this year, honoring the bars three-decade residency in the Lower East Side.

The Max Fish Campus ADV will be available on July 12th.

For More on adidas Skateboarding